A protein that had its charged amino acids swapped for neutral ones remained stable, soluble, and functional 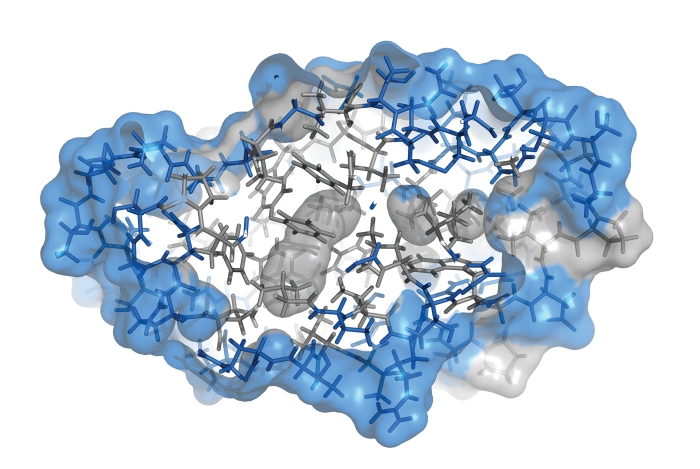 Credit: Jakob Winther
Removing the charges from a cellulose-binding protein (shown) left its structure and function unaffected. Hydrophilic residues are in blue; hydrophobic ones are in grey.

Though charge is one of a handful of fundamental factors that dictate a protein’s activity, scientists don’t fully understand how interactions between positive and negative amino acids affect a protein’s structure and function. Now, in a surprising twist, researchers have produced a mutant protein domain that lacks charged amino acid residues, but retains its folding and cellulose-binding abilities. The findings may have implications for protein design, helping scientists build better algorithms for designing proteins with new functions (Biochemistry 2016, DOI: 10.1021/acs.biochem.6b00269).

Charged amino acids are generally accepted as necessary for proper protein folding, solubility, and functions such catalysis, says Jakob R. Winther of the University of Copenhagen. Five out of the 20 amino acids commonly found in proteins are either positively or negatively charged under physiological conditions, and all known soluble proteins have at least a few of these residues. “Predicting charge interactions is incredibly difficult,” Winther says. “One charge will affect another and another. Everything gets tangled in a web of mutual attraction that blurs what’s going on.” To help unravel this web, Winther’s team attempted to create a protein with no charges.

As a first step, the researchers went to the Protein Data Bank—a repository of 3-D structures of large biomolecules—to find the least charged protein or protein domain of 100 residues or more. That turned out to be a cellulose-binding domain from the bacterium Cellulomonas fimi, which contains four charged residues. Next, the researchers used a program to help guide which mutations to make, looking for swaps with neutral amino acids that would produce the most stable protein possible. The winning mutant replaced a lysine, aspartic acid, arginine, and histidine with a methionine, glutamine, methionine, and tryptophan, respectively.

The researchers then expressed their uncharged mutant protein in Escherichia coli and put it through the wringer. They tested its solubility by checking how easily it precipitated in solution and its stability by monitoring how easily it unfolded when mixed with guanidine hydrochloride, which is commonly used to denature proteins. They also determined the protein’s structure with circular dichroism and nuclear magnetic resonance spectroscopy.

Based on all these measures, the uncharged protein seemed largely unchanged from the charged version. Plus, it’s actually more stable than the original protein. “Most proteins unfold with acid or base,” Winther says, because extreme pHs tend to add or subtract a charge from negatively or positively charged residues. As a final test, the researchers ran an assay to see whether the protein still binds cellulose. “To our surprise, we got something that is fully functional,” Winther says, and retains perfect function from pH 2 to pH 12.

Emil Alexsov of Clemson University cautions that just because the uncharged protein was functional in a test tube assay doesn’t mean that it would work in a cell. However, the study does provide important insight on the effect of charge on solubility in water. In an uncharged protein, “solubility should decrease, but this was not the case,” he says.

Winther says that this study provides a blank slate for which to study charge interactions in proteins. “The next step is to introduce charges at different distances to each other or that are more or less buried in the structure,” he says, to define a charge’s sphere of influence, an important consideration for protein design.

Pollution
Mercury makes it deep into marine trenches
Sustainability
US Senate passes sustainable chemistry legislation
Environment
P2 and ADM pair up for renewable products
Share X
To send an e-mail to multiple recipients, separate e-mail addresses with a comma, semicolon, or both.
Title: Charge-free protein retains its structure and function
Author: Erika Gebel Berg
Chemical & Engineering News will not share your email address with any other person or company.