[+]Enlarge
Credit: Blair Paulik
A corrected study estimates that airborne PAHs near fracking operations in Ohio do not pose elevated cancer risk to residents or workers. 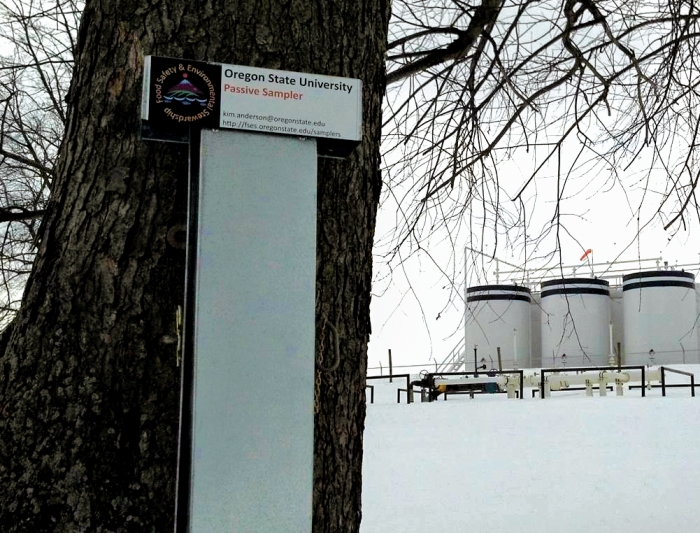 Credit: Blair Paulik
A corrected study estimates that airborne PAHs near fracking operations in Ohio do not pose elevated cancer risk to residents or workers.

Because of calculation errors, researchers have retracted a 2015 study showing that airborne pollutants known as polycyclic aromatic hydrocarbons (PAHs) near fracking sites in Ohio posed elevated cancer risk to area residents and workers. In a new paper, the team reports corrected PAH values that are about 0.4% of those originally reported. In contrast to the original study’s conclusions, the researchers estimate that exposure to these PAH levels does not exceed the Environmental Protection Agency’s acceptable risk levels for cancer (Environ. Sci. Technol. 2016, DOI: 10.1021/acs.est.6b02762).

PAHs are found in fossil fuels, so they can be released into the air through natural gas extraction, and they are also produced when the fuels are burned, such as in truck exhaust near fracking sites. Because they are linked with cancer and respiratory illness, Kim A. Anderson of Oregon State University and her collaborators set out in winter 2014 to measure their airborne concentrations in Carroll County, Ohio, an area with high fracking activity. They deployed passive air samplers made of low-density polyethylene strips to absorb PAHs in the air for several weeks on the private properties of 23 volunteers. (Environ. Sci. Technol. 2015, DOI: 10.1021/es506095e).

After analyzing the concentrations of PAHs on the strips, the researchers estimated airborne concentrations of PAHs for three subsets of volunteers, grouped by their property’s proximity to an active well: within 0.1 mile, between 0.1 and 1 mile, and between 1 and 3 miles. The researchers originally reported that a set of 14 PAHs had total concentrations of 330, 240, and 210 ng/m3 for the three groups, respectively. But they later discovered that they had mistakenly used a value of the ideal gas constant with incorrect units in their calculations to determine the air concentrations of PAHs and to adjust them for sampling temperature, Anderson explains. This error invalidated the original results. The corrected values are much lower, at 1.2, 0.94, and 0.97 ng/m3, on the same order of magnitude as PAH values at rural sites far from natural gas production and values measured near natural gas wells during the drilling phase only (Hum. Ecol. Risk Assess. 2012, DOI: 10.1080/10807039.2012.749447).

The researchers then recalculated the excess lifetime cancer risk level for these concentrations at a variety of different exposures, including maximum residential exposure of 350 days per year over 26 years. In contrast with their previous results, which showed that the maximum exposure exceeded the EPA’s maximum acceptable risk level, the corrected risk levels were 0.04 in a million—well within the EPA’s most conservative acceptable risk level of 1 cancer in a million.

Two major conclusions from the original paper hold. “We still see higher PAH concentrations closer to wells than farther away, on average,” Anderson says. And the forensic profile of the PAHs is consistent with a natural gas source rather than a combustion source, such as from vehicle traffic near fracking operations.

“I respect the authors for issuing a retraction after they discovered their own mistake,” comments David O. Carpenter, an environmental health scientist and director of the Institute for Health & the Environment at the University at Albany, SUNY. “This is the responsible thing to do, but not a step that every scientist would take.”

Carpenter notes that the new study shows elevated PAHs near fracking sites—and adds that the compounds can be harmful at any level. “The EPA standards are set at levels that are achievable in our modern (and contaminated) world, and should not be used to imply that any amount is without some danger,” he says. “But it is reassuring that the measured levels do not exceed EPA standards.”

The Independent Petroleum Association of America, a trade organization for the oil and gas industry, published several posts in response to the retraction and the corrected study on the website it sponsors, Energy in Depth (EID). “This is a prime example of a rushed study, designed to scapegoat fracking, that fails to fully vet the data collected—yet garners media coverage anyway,” wrote Seth Whitehead, a researcher for the website. An EID spokesperson told C&EN that the researchers’ own comments about the study design “should have raised some red flags in the media when the original was released.”

Anderson says that her team called each study participant to report the corrected data and notes that her group will also be holding meetings in Ohio later this summer to discuss the experiments with the community.

Because of the same error in ideal gas constant units, Anderson and coauthors also recently retracted another paper on PAHs in the air and water of the Gulf of Mexico after the Deepwater Horizon spill (Environ. Sci. Technol. 2014, DOI: 10.1021/es503827y). In this case, the correction did not change the results as dramatically, because the air temperatures used in their calculations for that study were closer to standard temperature, 25 °C, than those in the Ohio study (Environ. Sci. Technol. 2016, DOI: 10.1021/acs.est.6b02784). “All major conclusions still held,” Anderson says.

Comments
Werner Koudela (August 7, 2016 7:48 AM)
It is refreshing that scientists are willing to correct erroneous data, especially in such a controversial area. Kudos to the researchers as they truly embody what science should be all about.
Reply »

STLChemist (August 9, 2016 12:32 PM)
What a very amateur mistake! Unfortunately politicans will probably still "cite" this study as evidence that fracking is unsafe.
Reply »

Herb skovronek (August 10, 2016 5:35 PM)
I would love to see a comparison of similar testing for some interesting areas, such as a large refinery, a major vehicle tunnel, a congested highway during rush hour, an electric power plant, etc.
Reply »

This article and these errors could be used to drive home several messages to students:
1. units must be included in all calculations
2. you must do a few calculations by hand (with units) to confirm your spreadsheet formula is correct
3. (in group projects) having several people independently complete calculations will find and correct errors

Finally, It is sometimes difficult to determine if an answer is reasonable by its magnitude. These results, which differ by a factor of 300, are both reasonable prima facie. However, I would still question the reasonableness of the revised results given a comparison with other studies, as illustrated in Figure 2.

Robert Buntrock (August 12, 2016 9:49 AM)
I also was negatively impressed with the magnitude of the errors. Was this paper refereed? Checks by the senior author? Thank goodness they published a correction. Hopefully, all can learn from that.
Reply »

Lana (August 15, 2016 4:10 PM)
Regarding the reasonableness of the revised SumPaH12 concentrations. Comparisons with previous studies would have suggested the primary miscalculated concentrations were numerically more reasonable than these re-calculations, but we do understand that the atmosphere (& gas phase PAH profiles and concentrations) do routinely vary by multiple order of magnitude. In this case the best literature comparison (very similar passive sampling technique) only differed by ~ 3x (3.7 vs ~1 ng/m3) despite the fact that this study was measuring gas phase PAHs in -1degC air in Ohio winter vs Gulf coast air post-Deepwater Horizon. Given the variability in PAH sources and their atmospheric fate, the differences shown in Figure 2 seem reasonable.
Reply »

Peter Shanta (August 11, 2016 11:54 AM)
Retracting was the right thing to do. The newly adjusted concentrations are still valuable to researchers that determine adverse affect levels on biological pathways. They should consider sampling during summer months or at geographical locations with higher annual temps?
Reply »

Tingyue Gu (August 25, 2016 1:52 PM)
I always warn my students to be careful about units. When calculation results are unusually large or small, we should be especially cautious and check results even more carefully. Authors probably had a preset mind of high PAH levels. Thus, the high numbers didn't sound an alarm about possible calculation errors.

I am now using this case as an example in my teaching.
Reply »