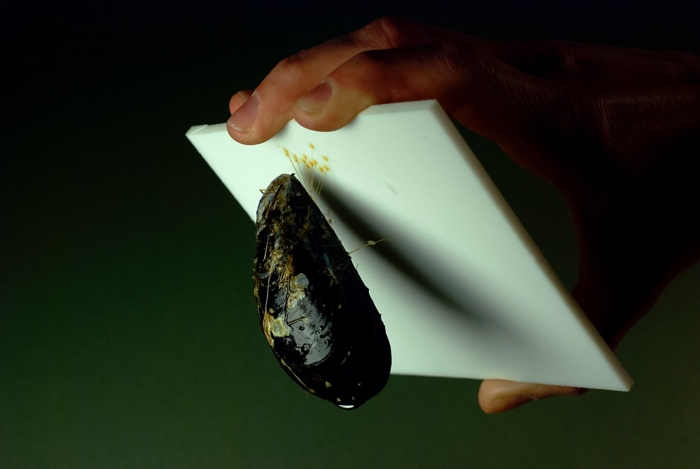 Credit: Jonathan J. Wilker
Coatings loaded with antioxidants might help disrupt the biological glue that mussels use to stick to surfaces, such as this sheet of Teflon.

The build-up of barnacles, mussels, and other marine organisms along a ship’s hull increases drag so that ships burn more fuel, increasing greenhouse gas emissions and spiking the fuel bill accordingly. But techniques to fight biofouling, as it’s called, can create problems of their own. 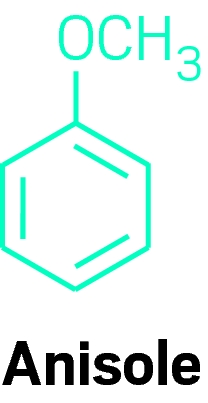 The most commonly used antifouling paints rely on biocides, chemicals that are toxic to clinging organisms and can linger in the environment, causing harm to other species. A new approach targets the clingy creatures’ glue, potentially offering an environmentally benign way to resist biofouling on oceangoing vessels (Chem. Mater. 2016, DOI: 10.1021/acs.chemmater.6b03390).

Unlike another group of ecofriendly coatings that reduce surface friction in an attempt to prevent organisms from attaching, the coating, proposed by chemist Jonathan J. Wilker and his team at Purdue University, is designed to interfere with the molecular mechanisms by which marine creatures form their biological glue. The goal is to lessen the strength of attachment so foulers are easier to remove through cleaning or even by the force of water moving past the hull of the ship at speed.

A mussel, for example, anchors itself to a ship by a cluster of fine threads. It deposits a mixture of proteins onto the hull and oxidizes some of the proteins, inducing cross-linking reactions to cure the glue. The team sought to test whether adding antioxidant compounds to the surface would interrupt the cross-linking process before the glue could set.

The researchers tested four different compounds—anisole, 2,6-di-tert-butyl-4-methylphenol, 2,6-di-tert-butylphenol, and ethoxyquin—plus a chemically similar control, 3,5-di-tert-butyltoluene, that is not an antioxidant. Each was dissolved into a commercially available metal primer at two different concentrations. Then researchers left a mussel for three days in a tank sitting on top of a metal panel painted with each coating, after which they measured the force required to remove the thread the animals use to attach themselves to the surface.

With coatings made up of 25% antioxidants by weight, the researchers observed reductions in average adhesion strength of up to 30% compared to the control coating. Ethoxyquin produced the greatest reduction in adhesion, but that effect may have been in part due to its softening of the paint, Wilker says. Anisole resulted in the greatest reduction without affecting the paint hardness. “It looks like the effect is concentration dependent,” Wilker says. “If you put a little bit of the antioxidants into the coating, nothing happens; but if we really load it up and put a lot in there, the adhesion drops.”

One unanswered question is how long the antifouling potential would last in real-world conditions. If the antioxidants are too quickly depleted, “that would limit the application in a commercial setting,” notes John A. Schetz of the University of North Texas Health Science Center, who studies ecofriendly biotechnologies including coatings to prevent biofouling. The current copper-based, biocidal antifouling paints also lose effectiveness over time as the copper is depleted.

Schetz also cautioned against extrapolating the study’s results across a broad range of marine fouling species because although many have cements or glues that rely at least in part on oxidative processes, the glues themselves are very different.

The researchers plan to test the antioxidants in different types of paint and under open water conditions where the coatings would be exposed to different species of marine organisms.

Pollution
Mercury makes it deep into marine trenches
Sustainability
US Senate passes sustainable chemistry legislation
Environment
P2 and ADM pair up for renewable products
Share X
To send an e-mail to multiple recipients, separate e-mail addresses with a comma, semicolon, or both.
Title: Antioxidant coating could help reduce marine biofouling
Author: Kerri Jansen
Chemical & Engineering News will not share your email address with any other person or company.

Comments
Haibin Yu (October 3, 2016 8:24 AM)
Please try the same experiment with urea and see if it works better.
Reply »

Todorka G. Vladkova (October 6, 2016 10:38 AM)
We are developing similar coatings for a long time. Including of antioxidants in antifouling coatings is known, for example: D.Akuzov, F. Bruemmer, T. Vladkova, Some Possibilities to Reduce the Biofilm Formation on Transparent Siloxane Coatings, Coll&Surf B: Biointerfaces, 104 (2013)303-310
Reply »