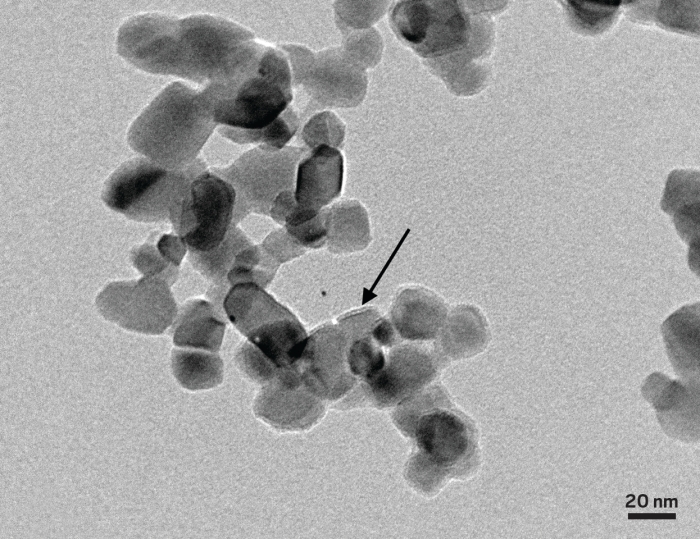 Credit: ACS Omega
A thin coating of lignin (arrow) that scavenges free radicals formed by titanium dioxide nanoparticles could be a sustainable additive to sunscreens

Titanium dioxide—a white pigment that reflects and scatters UV light—is a powerful sunblock. But one crystalline form of the pigment commonly used in sunscreens reacts in sunlight to produce free radicals that can damage skin. As a result, most sunscreen makers coat TiO2 particles with silica, alumina, or other compounds to quench their photocatalytic activity while preserving their sunblocking properties. A new study introduces a more sustainable alternative, encapsulating TiO2 particles with the abundant organic waste product lignin (ACS Omega 2016, DOI: 10.1021/acsomega.6b00177).

Lignins are a class of highly phenolic polymers that help give plants their physical structure. About 40 to 50 million tons of the waste is generated each year through production of paper, wood pulp, sugar cane, and other materials. But lignin is also a natural antioxidant—meaning it traps free radicals—and it absorbs UV radiation. These latter properties got Juan C. Scaiano and Anabel E. Lanterna of the University of Ottawa and their team thinking that it might serve as a sustainable, nontoxic coating for TiO2 in sunscreen.

To try it out, they mixed TiO2 nanoparticles with solutions of several different types of lignin, including water- and organic-soluble forms. They then irradiated them with UV-A, creating radicals that crosslink lignin, making it insoluble and causing it to adhere to the particle surface. After centrifuging and drying the product, the researchers recovered stable particles 30 to 50 nm in diameter, which included a 3- to 4-nm-thick lignin-based shell.

Paul Westerhoff, an environmental engineer at Arizona State University, says the lignin coating is a reasonable way to improve the properties of TiO2 and “potentially a good first step at using more natural materials,” but its performance should be compared with the coatings currently used in sunscreens, which include polydimethylsiloxane or aluminum silicates. He also suggests that the researchers investigate lignin’s stability—both its shelf life and its decomposition rates in the sun—as well as its hydrophobicity, since most sunscreens are combined with hydrophobic creams to make them spreadable and able to adhere to skin.

Hairus Abdullah (October 12, 2016 9:18 PM)
Lignin is a class of organic polymer material which can also degrade under UV light irradiation due to the high energy of UV light (Lignin may be degraded due to the UV or photo radical species). Therefore, it is possible that lifetime of product for lignin-based sunscreen is shorter than other default materials.
Reply »