Researcher's work provided the basis for understanding autophagy, or how cells degrade and recycle their molecular trash 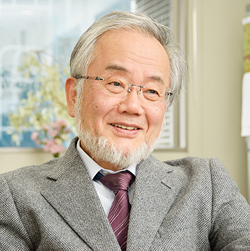 The 2016 Nobel Prize for Physiology or Medicine has been awarded to Yoshinori Ohsumi, 71, a cell biologist at the Tokyo Institute of Technology “for his discoveries of mechanisms for autophagy.”

Autophagy is the process by which cells capture large dysfunctional proteins, aging organelles, and invading pathogens in vesicles and then send them to the lysosome for degradation, said Juleen Zierath, Chair of the Nobel Committee for Physiology or Medicine in announcing the prize. “Without autophagy our cells won’t survive.”

Dysfunction of the autophagy process is life-threatening from birth through old age. For example, autophagy is disrupted in Alzheimer’s disease, when toxic protein aggregates are not properly discarded. As a consequence drugmakers have continued to eye the pathway as a therapeutic target.

Although researchers had known since the 1960s that cells cleaned up their large cellular garbage by enclosing it in vesicle sacks and sending it to the lysosome for degradation, in the 1990s, when Ohsumi began his work, nobody knew how the system worked, and what machinery was involved, Zierath says.

At the time, “people were not that keen to study how cells got rid of their trash—it was not considered sexy,” says Anne Bertolotti, who studies autophagy at MRC Laboratory of Molecular Biology, in Cambridge, and who hosted a visit from Ohsumi just a few weeks ago.

Ohsumi first noticed that you could induce baker’s yeast cells to produce autophagy vesicles under low nutrient conditions. This observation gave scientists the first method for controlling and studying the process, Bertolotti says. Then, “in a heroic effort, Ohsumi studied mutant yeast under the light microscope, one cell at a time, to figure out which genes were involved,” she adds.

Over the years Ohsumi continued to tease apart the mechanisms of autophagy and to show that similar machinery existed in more complicated organisms, including humans. Notably, he showed that the lysosome wasn’t just a waste dump, it was a recycling plant, Zierath adds. In some cases, discarded components are actually broken down in the lysosome and reused to make new proteins.

“Ohsumi is the father of this field,” Bertolotti says. “It is a really well-deserved prize.”

Ohsumi was in the lab when he received the famous phone call. "I was surprised," he told Adam Smith, chief scientific officer at Nobel Media. Since his original discoveries, autophagy has become a large research field, Ohsumi added. But “even now we have more questions than when I started.”

Chiradeep Chakraborty (Physiotherapist) (October 4, 2016 3:28 PM)
Its a great achievement congratulations sir you are a inspiration for us I am a physiotherapist by profession from India.
Reply »

Dr. D.V. Gokhale (October 6, 2016 2:02 AM)
It is really a great achievement of Prof. Yoshinori Ohsumi. He came out with the mechanism of autophagy and nicely demonstrated how cells use their own discarded components thrown out as a waste material in the lysosomes for degradation to generate new cells. Probably his next research would be on how the toxic protein aggregates will be properly discarded and degraded to avoid the Alzheimer's disease. I congratulate Dr. Ohsumi for this great achievement.
Reply »

Abdul Rasheed Mohammed (October 6, 2016 6:02 AM)
Heartiest congratulations to you Sir!

Thank you for showing the mankind the natural and most needed repairing center.

Anifa Kamal (October 10, 2016 8:30 AM)
The world thanking you for your wonderful effort to front line the cell biology which shall lead to found medicine for various life style disorder disease and too cancer itself.
Reply »