Edible insects could supply as much dietary iron as meat 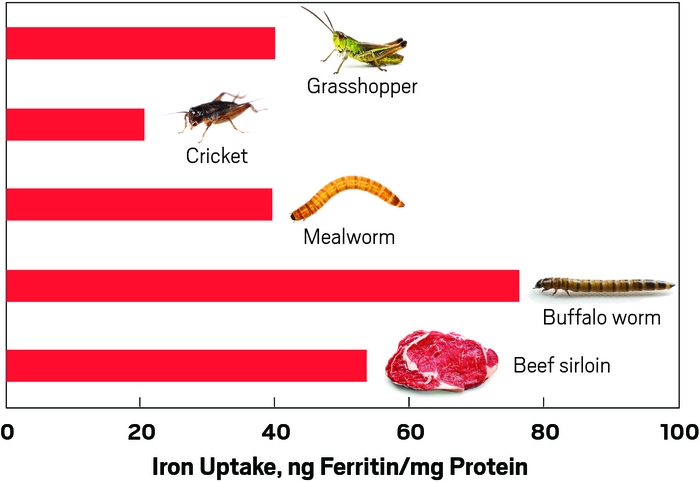 Iron is an essential dietary mineral, but there’s widespread iron deficiency among populations that eat little or no meat. That’s because humans absorb much less iron from plant-based foods than from meat, says Gladys O. Latunde-Dada of King’s College London. What makes meat-based iron so easy for humans to absorb is heme, an iron-carrying cofactor found in blood. Although insects don’t have heme, Latunde-Dada was inspired to study the invertebrates after watching a United Nations forum on insect farming as a way to combat greenhouse gas emissions from livestock farming. “If we are going to eat insects, we’ll need to see if they have enough iron,” she says.

Insects are part of diets in South and East Asia, Africa, and South and Central America. Latunde-Dada’s team studied four common food insects from these regions—grasshoppers (Sphenarium purpurascens), crickets (Gryllus bimaculatus), mealworms (Tenebrio molitor), and buffalo worms (Alphitobius diaperinus)—and compared them to sirloin beef. As a first step, the researchers simply measured how much iron the insects had. They crushed dried insects into a powder and used spectrophotometry to quantify the iron content, as well as that of other essential micronutrients, including calcium, magnesium, and zinc. Crickets had the most iron—12.91 mg/100 g, just shy of beef’s 15.47 mg/100 g.

Next the researchers looked at bioavailability: How much of that iron can humans actually absorb? This is affected by a range of factors—for example, an insect could contain abundant iron, but the iron may be poorly absorbed due to food particle size or encapsulation by insect cell components that can’t be degraded by human digestion. To test this, the researchers first mixed the insect powder with digestive enzymes at low pH to imitate conditions in the stomach, then added bile-pancreatic extract at neutral pH to mimic the small intestine. The researchers, again using spectrophotometry, determined the iron content of the digested material. To measure bioavailability, they then added the digested samples—each containing 20 μg of iron—to human epithelial cell cultures. After incubation, the researchers measured how much ferritin—a protein that stores iron—the cells contained. Even though crickets had the highest iron levels overall, iron uptake from buffalo worms, a type of beetle larvae, was the clear winner, even besting sirloin beef.

“I was a bit surprised at how well some of the insects did in comparison to the sirloin,” says Darja Dobermann, a graduate researcher at University of Nottingham who is studying how cultivating and eating insects can combat malnutrition “I had anticipated that insects would perform better than a plant-source iron but would not have guessed they would be close to the same level as a meat-source iron.” The next step, Latunde-Dada says, is to confirm these findings in humans. If people consumed more nutritious insects, it could benefit their health and the environment, she says.

Comments
Ming Yeh (November 9, 2016 2:52 PM)
An interesting article. In our everyday life, it is quite common to consume several ounces of beef daily. To consume similar amount of edible insets, however, may not provide a balanced dietary besides ferritin, unfortunately.
Reply »

Oliver (November 16, 2016 10:10 PM)
So are we supposed to eat raw insects - which makes sense - or, eat these highly processed... things? Powders? Now granted, minerals aren't molecules so turning insects into fine powders won't "destroy" breakdown anything, but what we know from mill houses, those places that turn wheat into flour - they all speak to nutrient loss - in the "powdering" (flouring) process.

This is why we have en riched flour or re fortified flour - and the main component they had to put back in is iron. How is your product different? Are you re fortify the powder after the processing? - And of course when flour is re enriched that is never the same iron that was in the original wheat stalk.
Reply »

Alex (November 20, 2016 4:31 PM)
Or is the "processing" here supposed to mimic the mastication process? The article was clear on the purpose of adding acidic compounds to mimic in vitro digestion, but not clear on the initial digestion steps.

Could it be that the crushing was dual purpose: to properly carry out the photospectrometry process, as well as test the possibility of making (and marketing) this new product?

More information on the entire process would be wonderful! Perhaps a link to the experimental process?
Reply »