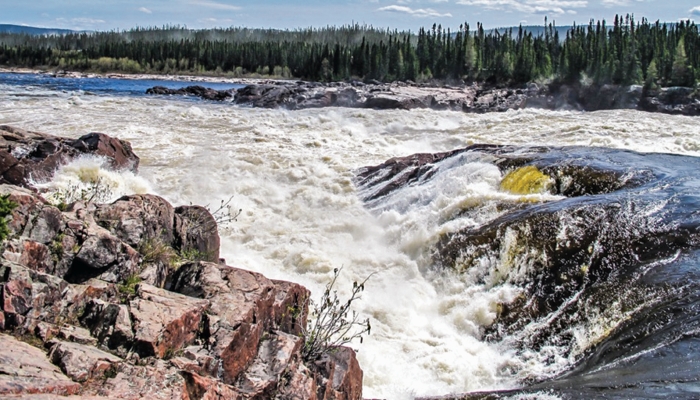 Credit: Environ. Sci. Technol.
Dams like the one under development at Muskrat Falls (shown in 2013) introduce more methylmercury into the food web, increasing dietary exposure for indigenous people living in the area.

Mercury occurs naturally in soil and is deposited from the air through fossil fuel emissions, especially burning coal. Damming floods the soil, mobilizing organic carbon that feeds microbes that can then convert elemental mercury into more toxic methylmercury. Methylmercury bioaccumulates in food webs, exposing people who eat local birds, fish, and other marine animals to higher levels of the neurotoxin. All currently proposed Canadian dams are within 100 km of indigenous communities, which rely on these foods.

Local Inuit and others have protested the Muskrat Falls hydroelectric project in Labrador because of these concerns. Harvard University scientists Elsie M. Sunderland, Ryan S. D. Calder, and colleagues built a model to predict methylmercury accumulation in the river above the dam and in the estuary downstream. Then they estimated the increased mercury exposure for wildlife and local residents, relying on data from earlier studies and baseline methylmercury measurements from hair samples of 571 Inuit in the area, about 20% of the total Inuit population in the region.

Mean methylmercury levels will increase approximately 10-fold in the river and 2.6-fold in the estuary after damming, the team estimates. Concentrations of methylmercury in local species including birds, fish, and seals would eventually increase 1.3- to 10-fold. This would translate, on average, to a doubling in current methylmercury exposure for the Inuit living in the area. Additionally, in one community the researchers studied, more than half of women of childbearing age and children under 12 would exceed the reference dose for methylmercury exposure set by the U.S. Environmental Protection Agency. Calder notes, however, that there is probably no lower limit for mercury exposure that eliminates risk of problems, including delayed cognitive development and cardiovascular health issues.

The researchers have also predicted equal or greater methylmercury concentrations for 11 other proposed dam projects in Canada using their model.

Pollution
Satellites can now see air pollution inequality within cities
Persistent Pollutants
Goodbye to some PFAS in food packaging
Pollution
Mercury makes it deep into marine trenches
Share X
To send an e-mail to multiple recipients, separate e-mail addresses with a comma, semicolon, or both.
Title: Dams increase mercury exposure for Canadian indigenous communities
Author: Deirdre Lockwood
Chemical & Engineering News will not share your email address with any other person or company.

Comments
F. Louis Floyd (November 24, 2016 6:24 PM)
This is an interesting article, but is quite misleading in its potential impact. The authors are describing a modeling study that is based on a long series of assumptions that are neither described not quantified. The title and tone of the article implies that the impact is faction, while it is in fact speculation (nee modeling outcome).

This is a prime example of how science looses credibility with the general public -- by encouraging readers to assume facts not yet in evidence. I fault both the authors and editors for their lack of care in the construction of this otherwise interesting activity.
Reply »