[+]Enlarge
Credit: ACS Sens.
The inlet of a compact electronic nose is placed near a meat sample to detect freshness. 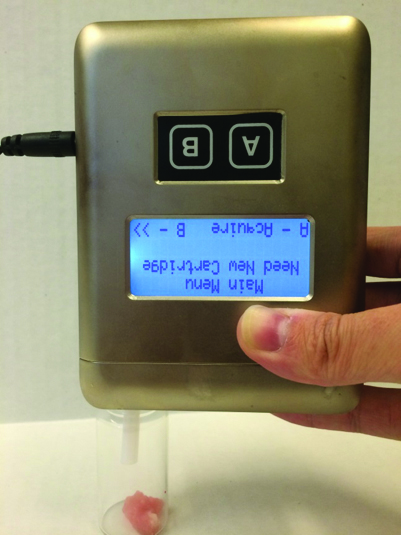 Credit: ACS Sens.
The inlet of a compact electronic nose is placed near a meat sample to detect freshness.

The bacterial decay of meat starts long before you can smell it. But a new palm-sized electronic nose can accurately spot this decay by sniffing gases emitted by rotting meat down to parts-per-billion levels (ACS Sens. 2016, DOI: 10.1021/acssensors.6b00492). The sensor could help cut food waste and prevent food-borne illnesses.

When bacteria break down amino acids in meat, the process releases a mix of sulfide and amine vapors. Spectrometry and chromatography can detect these chemicals, but these methods take time and require large, complex instruments. Electronic nose technologies, which directly sense compounds using electronic sensor arrays, can be more affordable and portable.

The new handheld device, built by Kenneth S. Suslick and Zheng Li of the University of Illinois, Urbana-Champaign, employs a disposable plastic strip printed with an array of 20 dyes, chosen for their ability to change color when they come in contact with specific chemicals. As mixtures of gases interact with the dyes on the strip, they generate unique color patterns.

The researchers chose to detect four gases emitted by rotting meat: hydrogen sulfide, dimethyl sulfide, trimethylamine, and cadaverine. A digital camera chip analyzes the pattern and intensity of the colors on the strip to determine the concentrations of the different gases. Direct testing of the analytes showed that the device could detect hydrogen sulfide at 8 ppb, dimethyl sulfide at 33 ppb, trimethylamine at 4 ppb, and cadaverine at 7 ppb—levels undetectable by the human nose. 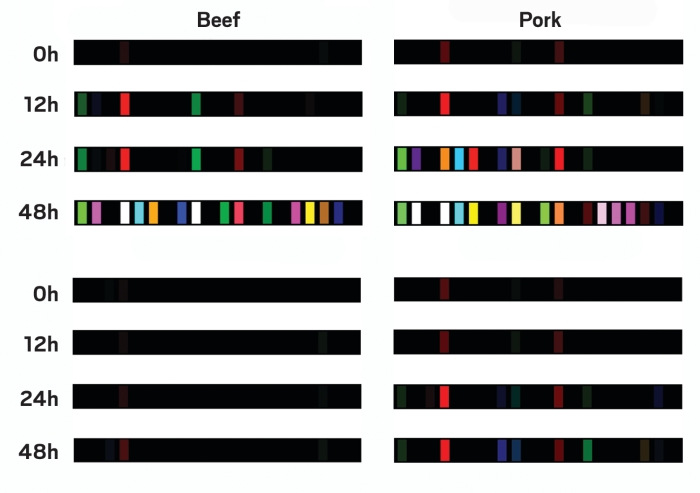 Credit: ACS Sens.
Odors given off by beef (left) and pork samples (right) generate unique color patterns in a new meat freshness sensor. Over the course of 48 hours, samples stored at room temperature (top four rows) increasingly give off compounds associated with spoilage, whereas those stored in a refrigerator (bottom four rows) do so less quickly.

Next, the researchers exposed the sensor to vapors from refrigerated and unrefrigerated beef, chicken, fish, pork, and shrimp samples for two minutes. For meats stored at room temperature, the color pattern changed over the course of four days, indicating gas buildup. For refrigerated meats, the color pattern did not change significantly, indicating slower spoilage. By statistically analyzing tests on multiple samples, the researchers could then use their color test to categorize the meat samples as fresh, less fresh, or spoiled.

In addition to meat inspectors and distributors, Suslick says that consumers could use the device with a smartphone and a special app. He has cofounded a company, iSense, to commercialize the technology.