It’s no surprise that chemists from young tech companies were among the thousands who convened at the ACS national meeting in San Francisco last week. After all, the Bay Area is home to roughly a third of C&EN’s first two classes of “start-ups to watch.”

This aldol reaction was created with the Animator app, which its creators describe as an “open-ended tool” for making and sharing molecular animations.
Credit: Alchemie Solutions

One Michigan-based company, however, wasn’t rolling out new 3-D printers or DNA biotechnology at the meeting. Alchemie Solutions is instead hoping its mobile applications will provide valuable tools for people teaching and learning organic chemistry.

Animator can also be used to make more physically oriented animations, such as this one illustrating Boyle’s law.
Credit: Alchemie Solutions

The company released its latest app, called Animator, just ahead of the San Francisco meeting. Attendees listening to Julia Winter, Alchemie’s founder and chief executive officer, on April 3 were thus among the first to see Animator in action. Winter spoke in a session hosted by the Division of Chemical Education.

Alchemie designed Animator to enable students and teachers to create and share animations of chemical and physical processes at the molecular level. Interested readers can download the app for iOS or Android devices at www.alchem.ie/animator/.

The app helps users draw atoms, molecules, and other particles that can be rearranged to illustrate sequential steps in a process, say, an aldol reaction. The app fills in the gaps between steps, meaning it’s not a tedious frame-by-frame affair, explained Winter, a former high school chemistry teacher.

“This is the first time I’ve seen a product that would help me get the animations out of my head and in front of students,” said Michelle Driessen, a chemistry professor and director of general chemistry at the University of Minnesota. “This should be a tremendous aid.” 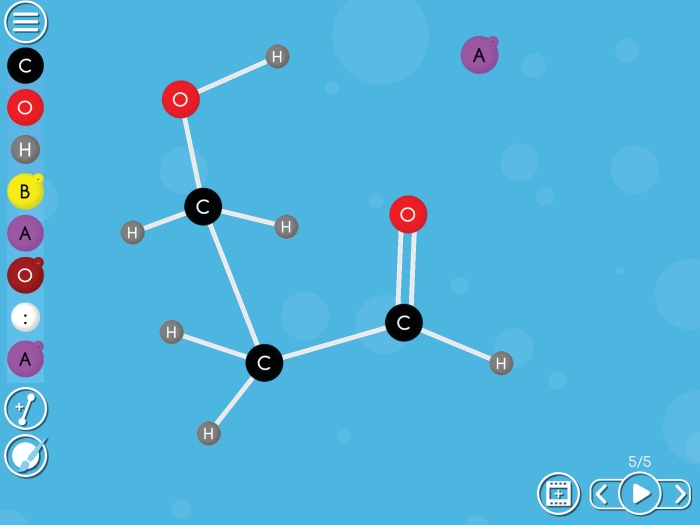 Credit: Alchemie Solutions
This screenshot from the Animator app shows one of the steps in an aldol reaction. Visit youtu.be/v2_dcKJYnng to watch the entire animation.
Chemical & Engineering News
ISSN 0009-2347
Copyright © 2020 American Chemical Society