Return to the article: 2-D materials go beyond graphene

Scientists have developed five groups of 2-D materials from elements across the periodic table. 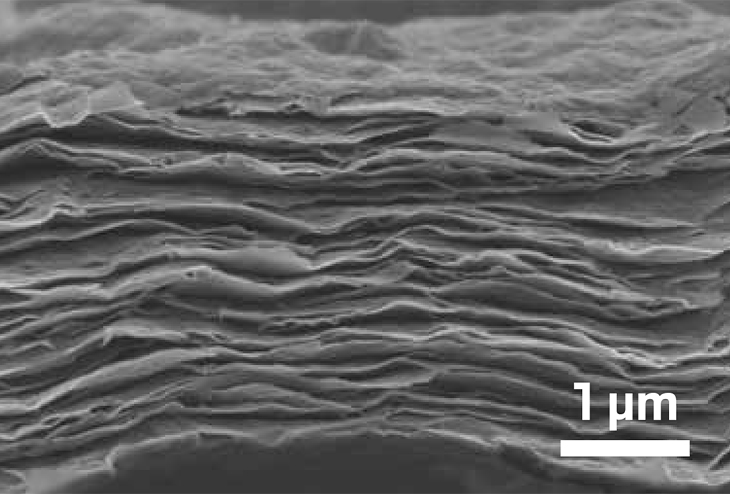 Description: A buckled sheet of boron atoms arranged in a honeycomb pattern.

Properties & potential applications: Owing to its electron deficiency, boron forms numerous polymorphs, most of which are semiconductors. The 2-D form, borophene, is a metal-like conductor, which could be useful for energy-storage devices and fast electronics. 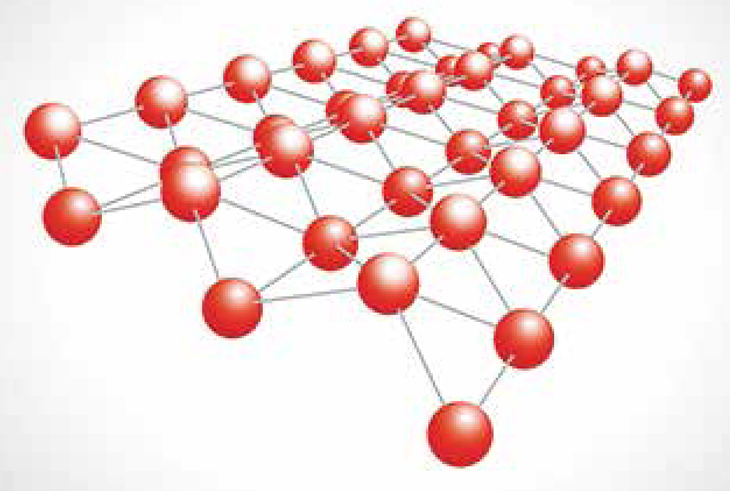 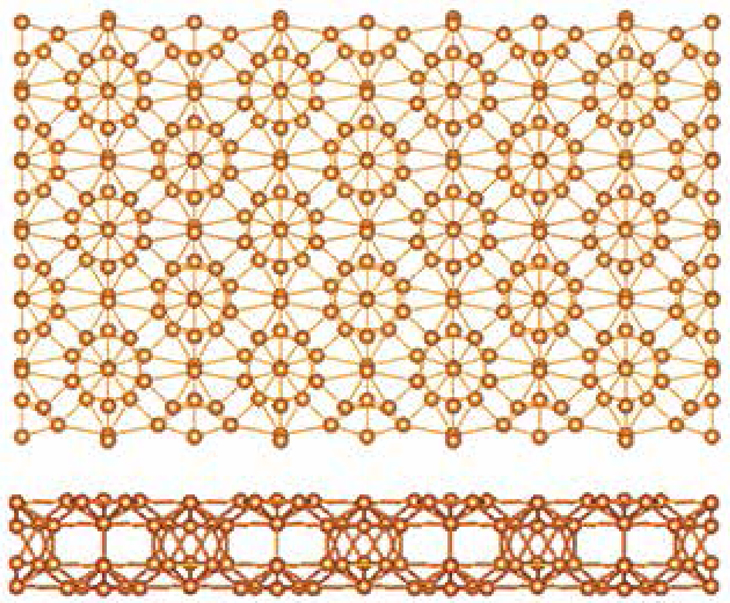 These structural models depict the 2-D layer of one type of borophene (top) and a top and side view of a 2-D layer of a different type (bottom).

Description: A buckled sheet of silicon atoms arranged in a honeycomb pattern. 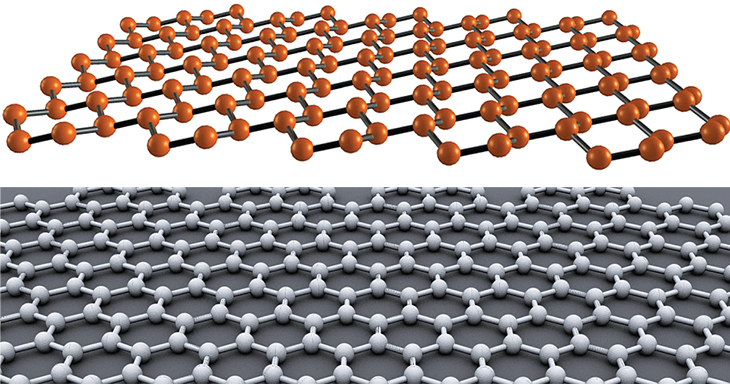 Description: A buckled sheet of tin atoms arranged in a honeycomb pattern.

Properties & potential applications: Stanene has a large band gap and a unique conductivity profile—it's a so-called topological insulator. This combination of properties may lead to applications in thermoelectric devices and electronics.

These scanning tunneling microscope images show a single layer of tin, or stanene (atomic resolution image, left), which was grown via a deposition method known as molecular beam epitaxy.

Description: A buckled sheet of germanium atoms arranged in a honeycomb pattern. 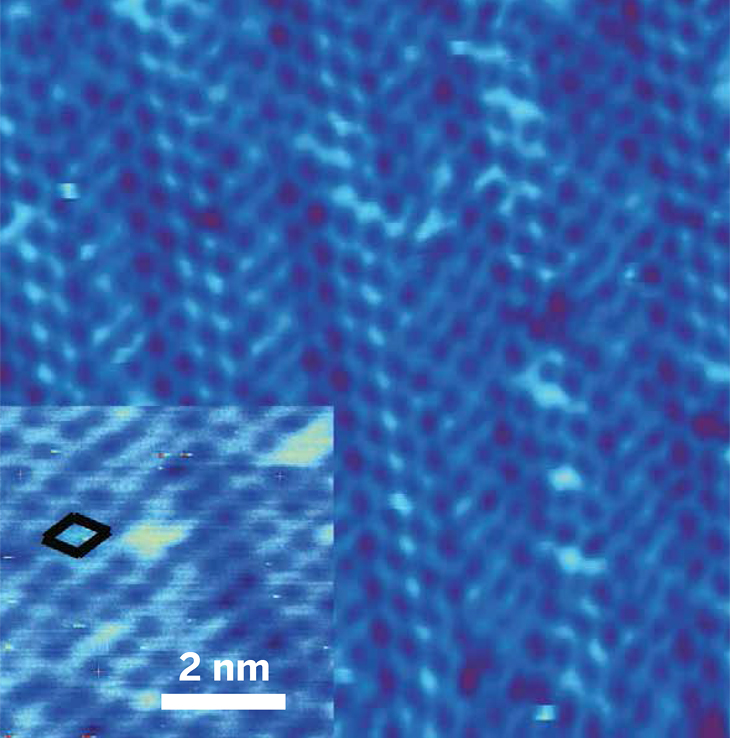 This atomically thin germanene film measures 16.2 nm x 16.2 nm (close-up shown in inset). It was grown via a deposition method called molecular beam epitaxy on a gold surface and then mechanically exfoliated.

Description: A buckled sheet of phosphorus atoms arranged in a honeycomb pattern. 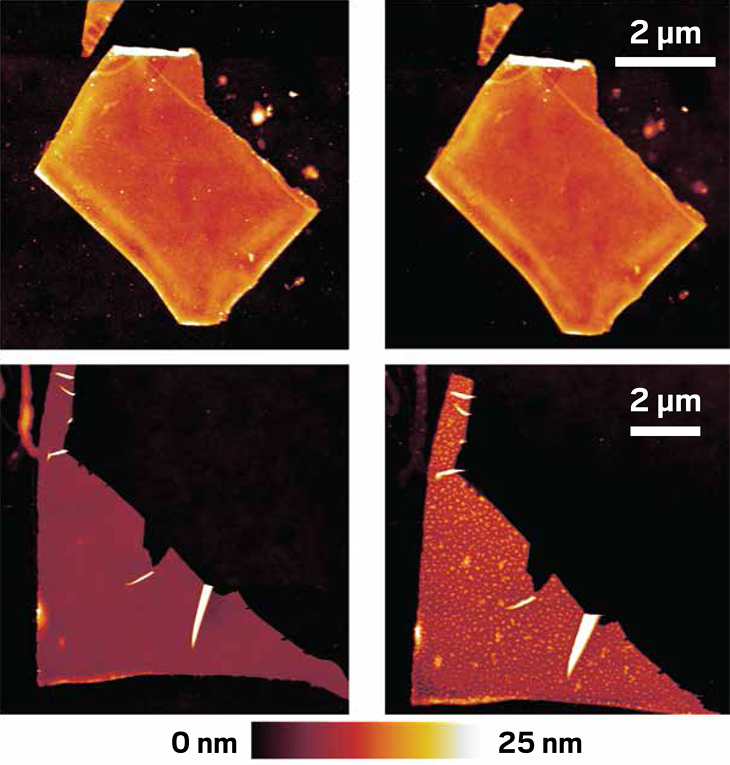 A flake of black phosphorus treated with a benzenediazonium derivative shows no sign of change even after being exposed to air for 10 days (top row). An untreated flake roughens and develops protrusions (light-colored spots) as a result of oxidation (bottom row), as seen in these AFM images.

Description: Semiconductor sheets in which a transition metal atom is sandwiched between two chalcogenide atoms.

Properties & potential applications: Because of their pronounced bandgaps, MoS2, WS2, ReS2 and other members of this group have been used to fabricate transistors and other circuit elements for lightweight, flexible electronics. 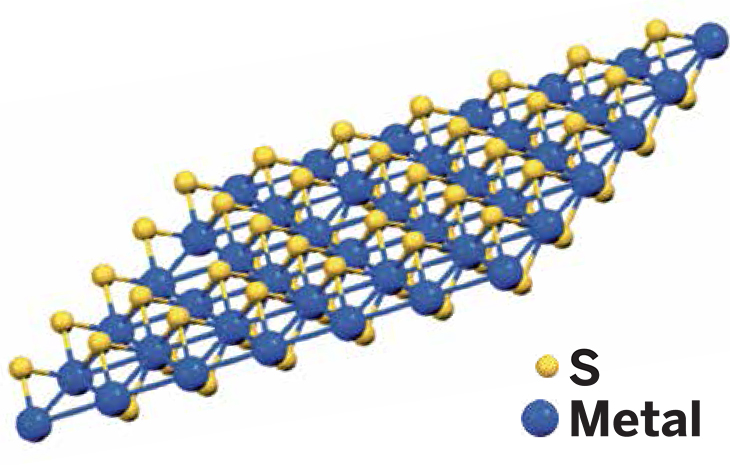 MoS2 and WS2 can now be grown as atomically thin films with a measured area of 10 sq in. 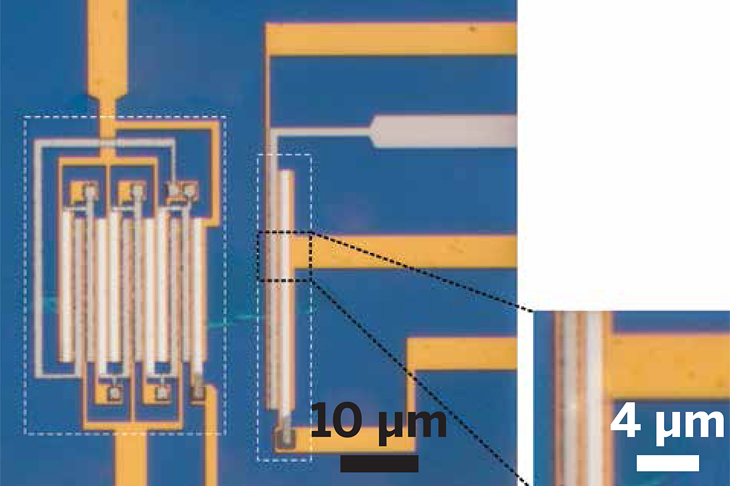 A molecularly thin film of MoS2 serves as the material on which the complex integrated logic circuits seen in this optical micrograph have been fabricated. The device outlined on the left is a five-stage ring oscillator. Next to it is an inverter.

Dioxane and other common solvents can exfoliate hydrazone-linked covalent organic frameworks (COFs). This simple method can be used to prepare and deposit ultrathin COF samples for analysis and applications.

Description: Formed by allowing nitrogen atoms to diffuse under a protective layer of graphene where they react with trapped gallium atoms.

Gallium and nitrogen atoms entrench between a silicon carbide substrate and graphene to form 2-D GaN, as seen in this schematic and electron micrograph.

Description: A layered material with a hexagonal honeycomb structure of alternating boron and nitrogen atoms.

Properties & potential applications: BN has been made via vapor deposition and exfoliation. In ultrathin films, BN retains a large band gap and dielectric properties. It could serve as an insulator for high-speed, transparent, flexible electronics.

Built on a silicon wafer, an ultrathin transistor made with 2-D materials uses graphene for electrodes, molybdenum disulfide as its semiconductor layer, and boron nitride as an insulator.

Description: A layered ionic solid known as an electride, featuring planes of atoms separated by sheets of delocalized electrons.

Properties & potential applications: Due to the high electrical conductivity of ultrathin sheets of electrides, researchers are developing these materials for battery applications. 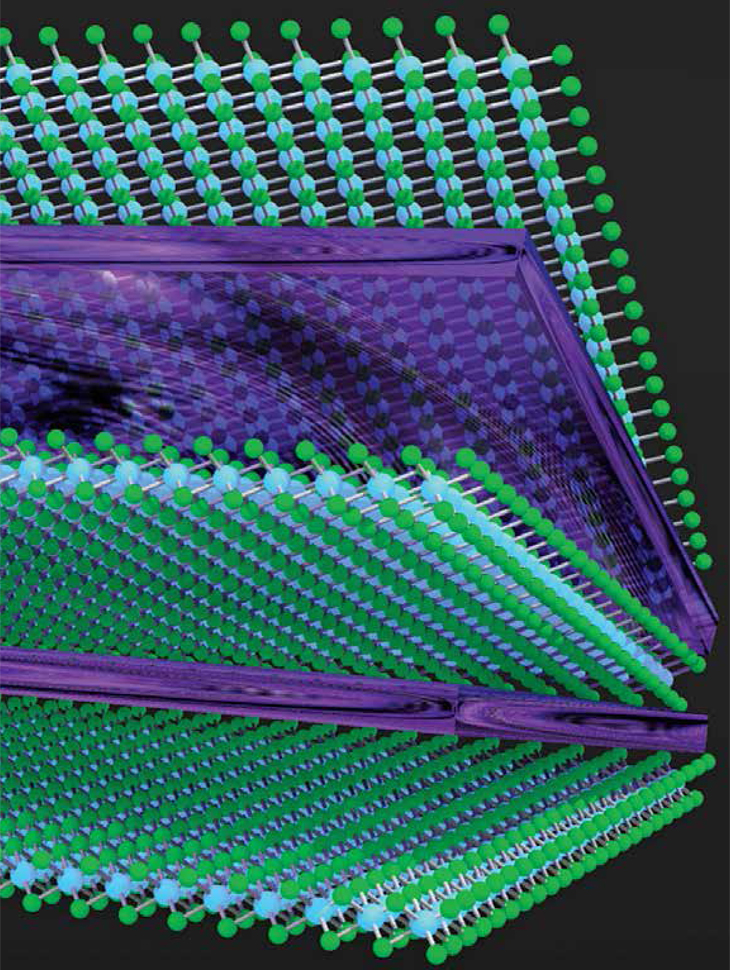 Ca2N, an electride, consists of layers of calcium and nitrogen atoms (green and blue) separated by layers of electrons (purple).