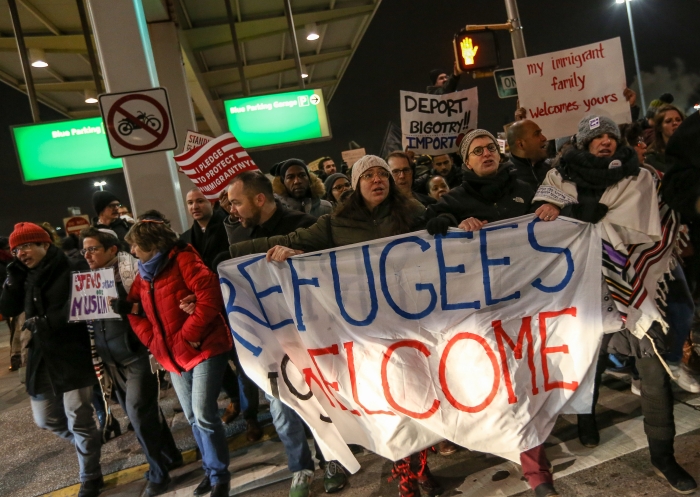 Chaos reigned as visitors from the seven countries—Iraq, Iran, Libya, Somalia, Sudan, Syria, and Yemen—were detained at airports or prevented from leaving on trips that had already been approved. Permanent residents who have lived in the U.S. for years were also affected. Universities, federal researchers, and companies all wrestled with what the ban would mean for them, their employees, or their students.

The ban was designed to help prevent terrorist attacks, Trump said. Administrative officials say it is temporary in most cases; entry to the U.S. was suspended for 90 days for most of those affected. Syrian refugee programs were halted altogether. But enforcement has been erratic, and it’s unclear when people with visas will be allowed to enter the U.S.

Scientists quickly started speaking out as stories of detained travelers, including researchers, started to circulate. By Feb. 1, more than 18,000 scientists, including Nobel Prize winners, had signed a petition opposing the order.

C&EN did not uncover reports of chemists who were caught up in the immediate detentions at airports. But the normally cautious American Chemical Society, which publishes C&EN, reacted strongly.

“The order itself is overly broad in its reach, unfairly targets individuals from a handful of nations, ignores established mechanisms designed to achieve the ends sought by the order, and sets potential precedent for future executive orders,” the society said in a statement. ACS has 109 members in Iraq, 41 in Iran, two in Libya, and one in Sudan.

C&EN’s coverage of how those changes are affecting chemistry.

Worried about how these shifts will affect you, your company, or your university? C&EN wants to hear from you for an upcoming article. E-mail us at cenprojects@acs.org.

ACS joined 151 other science organizations and universities in a letter to Trump Jan. 31 expressing their concerns: “Implementation of this policy will compromise the United States’ ability to attract international scientific talent and maintain scientific and economic leadership.”

The largest number of affected scientists likely comes from Iran. More than 12,000 students came from Iran to the U.S. last year, according to data from the Institute of International Education. That’s far more than the other countries covered by the ban. Universities scrambled to help international students and scholars who were held in airports or turned back.

“The order is stranding students who have been approved to study here and are trying to get back to campus and threatens to disrupt the education and research of many others,” says Mary Sue Coleman, president of the Association of American Universities, a coalition of the top research universities. She urged the Administration to make it clear that the U.S. “continues to welcome the most talented individuals from all countries.”

Alison Hatt, the user program director at Lawrence Berkeley National Laboratory’s Molecular Foundry, says an Iranian postdoc from an Italian research institution was supposed to work on a project there but would be unlikely to get a visa. “Our researchers are definitely being impacted by the anti-immigration order.”

Collaborators from other countries will be reluctant to work with U.S. scientists if this is not resolved, says Zafra Lerman, president of the Malta Conferences Foundation, which promotes international scientific and technical collaborations.

“We are losing the opportunity to lead by example that was ours for so many years, and we are impacting the progress of science,” Lerman says. “By putting obstacles on science diplomacy, we will just torpedo its purpose of security and safety.”

Although many companies spoke out, the life sciences industry was largely silent on the ban. Neither of the main industry groups—the Pharmaceutical Research & Manufacturers of America and the Biotechnology Industry Organization—commented on the executive order.

Neither did major U.S. chemical companies, none of which responded to C&EN’s request for comment. Other than Iran, most of the countries with large chemical industries, such as Saudi Arabia, Kuwait, and the United Arab Emirates, were excluded from the order.

Few big pharma firms have made a substantive statement. Allergan CEO Brent Saunders was the notable exception, tweeting on Jan. 29 that his company “is strong & bold [because] of diversity. Oppose any policy that puts limitations on our ability to attract the best & diverse talent.”

Novartis said in a statement, “Upholding our steadfast commitment to associates of all nationalities and religions is core to our values as we work to address society’s most pressing health care challenges.” So far, none of its employees have experienced a disruption to business travel.

Jason Kelly, founder of the small but rapidly growing start-up Ginkgo Bioworks, is concerned that the action will have a lasting impact on U.S. science.

“Many of my cofounders and colleagues are immigrants or first-generation Americans from countries all over the world,” he says. “That immigrants to the U.S. play a key role in science and technology is plainly obvious—all American winners of scientific Nobel prizes last year were immigrants—but immigrants don’t have to be scientists or engineers to be deserving of respect and rights.”

Policy
Trump throws international science immigration into turmoil
Policy
Trump bans some Chinese students from US
Policy
Scientists push back against Trump administration’s proposed visa rules
Share X
To send an e-mail to multiple recipients, separate e-mail addresses with a comma, semicolon, or both.
Title: Scientists speak out against U.S. President Trump’s immigration ban
Author: Andrea Widener, Linda Wang, and Lisa Jarvis with additional reporting from Alex Tullo and Melody Bomgardner
Chemical & Engineering News will not share your email address with any other person or company.

Xiaoqin (February 1, 2017 3:59 PM)
I am an immigrant myself. I support Trump's Immigration Ban! He is only targeting the 7 Muslim Terrorist Nations, not all the immigants, as many are making or passing rumors about. He is for US national security and citizens' safety.
Reply »

Dustin (February 3, 2017 3:50 AM)
Xiaoqin, Trump's closest adviser Steve Bannon has stated that war in the South China Sea is "inevitable". Do you think his travel ban may later affect immigrants from countries involved in that conflict?
Reply »

Ralph Horstmann (February 1, 2017 4:28 PM)
I, as a chemist, support the executive order as is. If you read the order it is very much different from what the media has informed the public. It is not a ban and it is a reasonable order to follow and it is meant to protect the American public. There is a great deal of overreaction to the order which I believe is fused by the American media. Link to order: https://www.whitehouse.gov/the-press-office/2017/01/27/executive-order-protecting-nation-foreign-terrorist-entry-united-states
Reply »

Chad Brick (February 3, 2017 2:03 AM)
This EO will not protect us at all. The threat of terrorism is trivial in the first place - your LIFETIME risk of dying to a terrorist inside the US is about the same as the risk you would take in a single cross-country drive - and this EO doesn't even reduce it! Any time you harm innocent Muslims, which this EO does in spades, you increase the terrorism risk by generating propaganda for terrorist organizations and inflaming passions. This EO isn't keeping the bad guys out. It is keeping good, hard-working, honest folks out, to our deep detriment and even more so theirs.

Jania (February 1, 2017 4:35 PM)
I think there's a lot of self-importance being expressed by the "scientific community" over this. First of all, it's not a ban, it's a three-month pause. I understand that it's a major headache for people who are attending conferences in the next six months or so, but this is only a speedbump, not a brick wall or a major derailment.

I agree that the implementation was horrific. On the other hand, the way we handle visas is generically a nightmare anyway: I personally know of one post-doctoral student who was turned away at the airport last week because of confusion over whether he had a work or student visa, so he returned to his homeland .... of Denmark.

I fail to see how this temporary halt in visa applications will cause the downfall of USA science, as this article seems to predict.

Chad Brick (February 3, 2017 2:08 AM)
Being forcibly separated from your family, job, or school for months is a HUGE deal and not something any moral person would inflict upon others without extremely important reasons.

There is no indication that it is going to end then in any case. It is highly likely Trump will just find an excuse to extend it. There was no basis for the initial EO, so why would he need one in May?
Reply »

Doug Moore (February 1, 2017 6:28 PM)
Why is C&EN playing politics? I don't approve of the ACS using my dues to undermine the government of the United States.
Reply »

Michael Olah (February 4, 2017 11:13 AM)
Playing politics? There were over 100 students at my university alone that are affected by this order, many of whom are chemists or chemical engineers. The job of the ACS is to support and advocate for all chemists, so this is the exactly the thing C&EN should be reporting on. If the ACS were to ignore this in order to "support" the current administration, THAT would be playing politics.
Reply »

PhD Chemist (March 15, 2017 7:31 PM)
You know very well you are dramatizing the situation and overstating the severity of the problem. Shame on you
Reply »

Ruth Tyler-Cross (February 1, 2017 6:28 PM)
Big "Thank you" to ACS and scientists worldwide for the strong stance against the ban.
Reply »

David (February 3, 2017 2:13 PM)
I'm right there with you Doug. Science orgs playing disputable politics are going to lose a few members, and a lot of credibility when it comes to their supposedly "representing the scientific community".
Reply »