Killing the tariff-cutting pact is a setback for chemical exporters

[+]Enlarge
Credit: Ron Sachs—Pool via CNP/Sipa US/Newscom
President Trump has signed a number of memos making key changes in U.S. policy, including one withdrawing the nation from the Trans-Pacific Partnership trade deal. 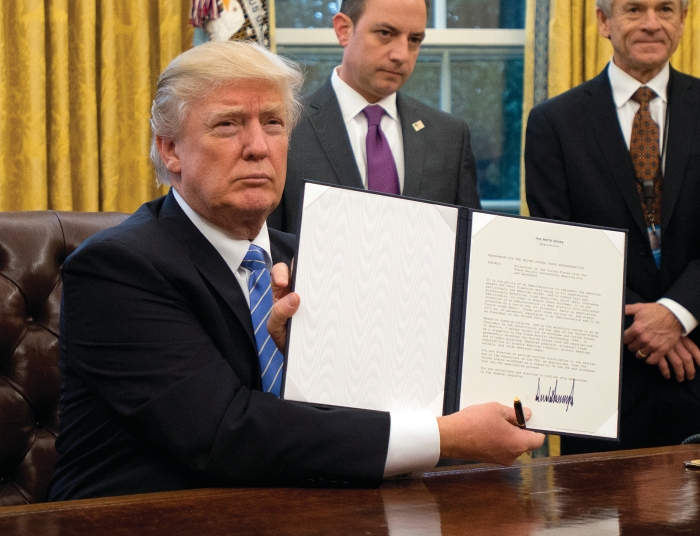 Credit: Ron Sachs—Pool via CNP/Sipa US/Newscom
President Trump has signed a number of memos making key changes in U.S. policy, including one withdrawing the nation from the Trans-Pacific Partnership trade deal.

President Donald J. Trump on Jan. 23 formally withdrew the U.S. from the Trans-Pacific Partnership (TPP) agreement, a trade deal strongly supported by the chemical industry and many other U.S. businesses.

The action fulfills Trump’s campaign promise to abandon the Pacific Rim trade pact early in his Administration. “We’ve been talking about this for a long time,” Trump said after signing a memo effecting the change.

Shortly after his election last November, Trump denounced the 12-nation Pacific Rim trade agreement as a “potential disaster for our country.” He said he would pursue bilateral trade deals with individual countries that offer more protections for U.S. workers.

TPP was negotiated by former president Barack Obama’s Administration. But Congress refused to ratify the deal last year after it came under criticism from both Trump and Democratic presidential nominee Hillary Clinton.

Chemical manufacturers backed TPP, saying it had the potential to eliminate punitive tariffs and taxes and provide new market opportunities for U.S chemical exports. Although tariffs on most chemicals with TPP member countries are relatively low, the fees on some products are as high as 25%, particularly for plastics.

The agreement would have eliminated tariffs on most chemicals as soon as it took effect. An analysis by the American Chemistry Council, an industry trade group, estimates that gaining unfettered access to growing markets in the Pacific Rim had the potential to boost U.S. chemical exports by $1.2 billion per year.

The Society of Chemical Manufacturers & Affiliates (SOCMA), an association representing the specialty chemical industry, urged the new Administration to continue to pursue trade agreements in Asia and elsewhere.

“While we are disappointed about the Trump Administration’s decision to pull out of TPP, we hope that this marks the next step forward for future, high-caliber trade negotiations,” says Brittany Mountjoy, SOCMA’s manager of government relations.

TPP was not perfect, but it did contain many important provisions to level the playing field for chemical exporters, she tells C&EN. “We look forward to working with Congress and the Administration to further open up markets for our members, whether it is the North American Free Trade Agreement [NAFTA] or other strong future trade agreements,” Mountjoy says.

The pharmaceutical industry, which had criticized the TPP agreement for failing to deliver sufficient market exclusivity for pioneering biological drugs, says it will support trade agreements that include strong intellectual property protections and enhance market access.

Trump is expected to sign a presidential memorandum soon that will launch renegotiation of NAFTA—a trade agreement among Canada, Mexico, and the U.S. Trump has blamed that deal for an exodus of manufacturing jobs from the U.S. since it went into effect in 1994.

The President said on Jan. 22 that he would soon open talks with Canadian Prime Minister Justin Trudeau and Mexican President Enrique Nieto.

This article was updated on Jan. 25, 2017, to add comments from the Pharmaceutical Research & Manufacturers of America.