A trehalose-based glycopolymer protects insulin against heat and mechanical stress, prolonging the protein’s in vivo lifetime in mice 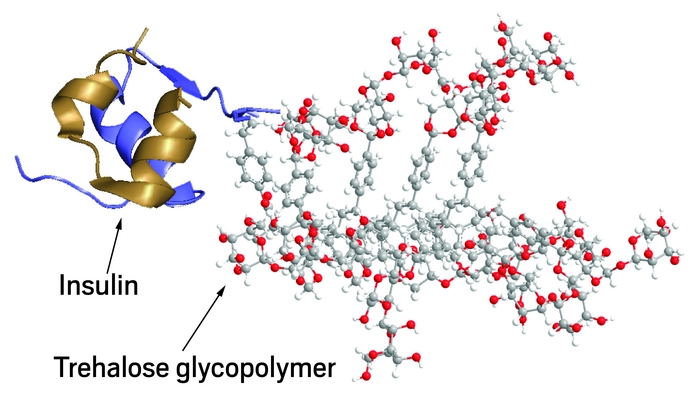 Credit: Bioconjugate Chem.
A glycopolymer with trehalose sidechains increases the in vivo lifetime of insulin in mice and safeguards the protein from heat and mechanical stress that could arise during storage and transport.

Attaching biocompatible polymers like polyethylene glycol (PEG) to therapeutic proteins can prolong their lifetime in the bloodstream. But many of these polymers don’t stabilize protein drugs outside the body. Protein drugs often require refrigeration and careful handling during storage and transport; otherwise, they can become inactive, with life-threatening consequences for patients.

Now, researchers have developed a polymer that could stabilize protein drugs both before and after injection. When attached to insulin, the glycopolymer, whose sidechains contain the disaccharide trehalose, prolonged the protein’s lifetime in mice without toxic effects. It also prevented insulin from aggregating in a test tube when exposed to heat and mechanical stress, conditions that can occur during handling and shipping (Bioconjugate Chem. 2017, DOI: 10.1021/acs.bioconjchem.6b00659).

Heather D. Maynard of the University of California, Los Angeles, and colleagues had already found that the trehalose glycopolymer could protect lysozyme and other enzymes from heat and freeze-drying. In the new study, they wanted to test the glycopolymer’s ability to stabilize protein drugs in and out of the body. They focused on insulin, widely used to regulate blood glucose levels in people with diabetes.

Injected into mice, the insulin-glycopolymer conjugate had about the same lifetime as an insulin-PEG conjugate—a combination known to increase the lifetime of insulin in vivo. The insulin-glycopolymer conjugate lowered blood glucose levels in mice but required a fivefold higher dose than insulin alone. Earlier studies had reported similar results with insulin-PEG, possibly because the polymer blocks insulin from binding to its receptor. Future research could identify glycopolymers to conjugate to the insulin protein that better enable receptor binding, according to the researchers.

“This is a promising alternative to PEG,” the staple polymer conjugated to protein drugs, says Theresa M. Reineke of the University of Minnesota. Maynard has already begun testing the trehalose glycopolymer with other therapeutic proteins. Stabilizing these drugs is important in the U.S., she says, but also in other areas where continuous refrigeration isn’t available. Still, longer-term preclinical studies are needed. “In-depth mechanistic studies are probably warranted in a future study, as well, to fully understand this system,” Reineke says.

Comments
Russ Lehrman (February 8, 2017 9:35 PM)
Great study! How large is the polymer? Is the loss of bioactivity due to polymer size or the point of attachment? If they haven't already, these researchers may want to take a reactive form of trehalose monomer, conjugate to insulin as they've done in this study, and assess bioactivity of the modified insulin. Since the non-conjugated mixture also protects insulin from aggregation, they may want to continue to assess the trehalose glycopolymer v trehalose as a potential excipient. Establishing new non-toxic excipients that can be used to create novel drug products is most welcome!
Reply »

Heather Maynard (April 25, 2017 2:44 PM)
Thank you for the kind comments. The conjugated polymer was 10 kDa. We believe the loss of bioactivity is mostly due to the conjugation at the GlyA1 residue, which is involved in receptor binding. With regard to comparison to trehalose itself, we have consistently observed in our previous studies with other proteins (see J. Am. Chem. Soc. 2012, DOI: 10.1021/ja2120234, Biomacromolecules 2013, DOI: 10.1021/bm4003046) that the trehalose glycopolymer stabilizes better than trehalose alone as an excipient, so we expected a similar result with insulin stabilization. After the publication, we compared insulin stabilization with the polymer or with small molecule trehalose, and the polymer indeed stabilizes better than the free sugar itself added at 50 weight equivalents.
Reply »

Tyler (February 14, 2017 10:26 AM)
I assume you predict that your conjugation point is on the lysine residues of the protein. How did you prove that the polymer is conjugating rather than simply ionically coating the protein? I've tried to test the presence of a covalent reaction using lysine and PEG with a microcalorimeter but was unable to resolve such a small reaction with my instrumentation. What are you proposing is the reaction mechanism occurring between the polymer and protein and how could you go about proving it?
- Tyler
Undergraduate, University of Georgia
Reply »

Heather Maynard (April 25, 2017 2:47 PM)
We confirmed covalent conjugation through tandem mass spectral analysis. A 106 Da linker corresponding to the hydroxybenzaldehyde moiety originating from the polymer end group is left following cleavage of the polymer using formic acid. We determined conjugation took place at the A chain N-terminus and the single lysine residue in the B chain. We also could directly characterize the insulin-PEG conjugate by mass spectrometry and observed an increase in mass corresponding to the covalent attachment. Additionally, we could observe separate bands corresponding to unreacted insulin, free polymer, and covalent conjugate during the conjugation reaction by gel electrophoresis, indicating that the conjugate formed from more than non-covalent interactions (Figure S7 in the paper). For characterization of your conjugate, we suggest using mass spectral analysis such as matrix-assisted laser desorption/ionization (MALDI) spectrometry as it is considered one of the more definitive proofs of conjugation in the field. PEG conjugates tend to ionize very well, and thus your analysis should be straightforward. The mechanism for reductive amination is well-established and can be found in most standard organic chemistry textbooks.
Reply »

(March 16, 2018 1:48 PM)
This is really interesting! I was wondering if there is any information on this being tested on humans? Or are the only tests so far just on mice?
Reply »