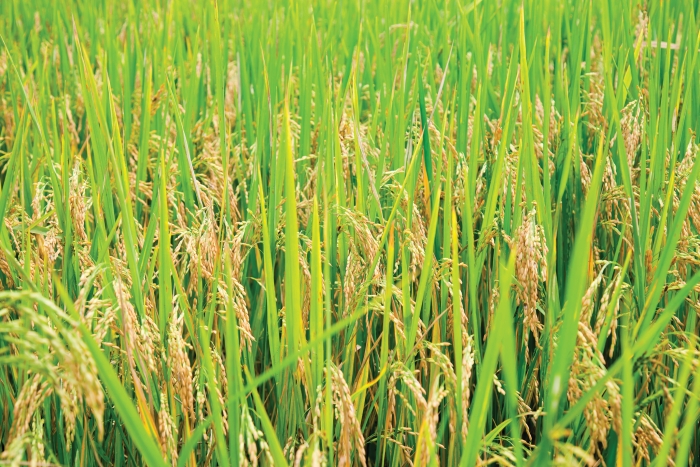 Credit: Dmitry Naumov/Shutterstock
A nanocomposite fertilizer made of urea and hydroxyapatite increased crop yields when tested on rice plants.

Nitrogen fertilizers—used to grow crops around the globe—have a problem. After they’re applied to soil, more than three-quarters of their nutrients get washed away before plants can absorb them. That wastes money and creates environmental messes downstream. Now, researchers have used nanoparticles to create a potential solution: a fertilizer that releases nutrients over a week, giving crops more time to absorb them (ACS Nano 2017, DOI: 10.1021/acsnano.6b07781).

Urea is a common nitrogen source in fertilizer, but it quickly breaks down into ammonia, which rainfall quickly flushes away. To account for that loss, farmers need to apply extra fertilizer to crops, which is expensive—especially for developing regions of the world where food supplies are unstable and populations are growing. Ammonia also can lead to harmful algal blooms in waterways and can enter the atmosphere as nitrogen dioxide, a potent greenhouse gas, says Gehan Amaratunga, an engineer at the University of Cambridge. Fertilizers that slow down the release of urea have multiple benefits.

Slow-release fertilizers are available and consist of urea coated in water-insoluble sulfur or polymers. Such fertilizers reduce runoff, but they are expensive for general agricultural use and haven’t been shown to actually increase crop yield. Amaratunga and his colleagues decided to try a new strategy: They attached urea molecules to nanoparticles of hydroxyapatite, a naturally occurring form of calcium phosphate found in bone meal. Hydroxyapatite is nontoxic and a good source of phosphorus, which plants also need. Similar techniques have been used to create slow-release nanomedicines, Amaratunga says.

In water, the urea-hydroxyapatite combination released nitrogen for about a week, compared with a few minutes for urea by itself. In field trials on rice in Sri Lanka, crop yields increased by 10%, even though the nanofertilizer delivered only half the amount of urea compared with traditional fertilizer. The scientists have also tested the fertilizer with maize, wheat, and tea plants. Amaratunga says the application regime—an initial application, followed by monthly reapplications—mirrors traditional methods of fertilization but requires far less substance.

The cost of making the nanofertilizer is slightly higher than for conventional fertilizer, but that is offset by the reduction in the amount of fertilizer needed—and the environmental benefits of less runoff, Amaratunga says. The researchers say they expect the cost to come down as they scale up the manufacturing processes.

This study’s results are impressive, says Richard Liu, a postdoctoral researcher at The Ohio State University who was not involved with the work. He says most of the studies published in past years haven’t shown whether conventional slow-release fertilizers actually produce more crops. The nanocomposite fertilizer looks more promising than other slow-release options for increasing crop yields and in reducing costs and environmental risks. He expects that this type of fertilizer could be used in most agricultural areas around the globe and on a variety of crops, such as wheat, corn, and soybeans.

With a worldwide population growing to 9.6 billion, people will need creative strategies to grow more food with fewer resources, says Amaratunga. “This is globally relevant, and it’s not really very complicated. It’s one of these innovations where when someone sees it, they say, ‘That’s sort of obvious, but I never thought of it before.’”

Comments
Bill Eykamp (February 23, 2017 10:19 AM)
In the corn belt, N is applied once. It is used to support maximum yield. In drought or other adverse conditions, all the excess ends up as runoff.
Will the economics of this system justify multiple applications in our highly mechanised farm community?
Reply »