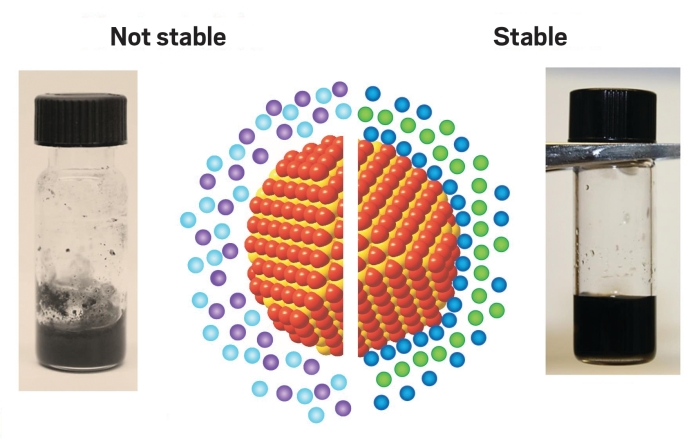 Credit: Adapted from Nature
A new study proposes that chemical bonding of surface atoms (orange) of a nanocrystal to solvent ions (blue) of a molten inorganic salt is required for colloidal stability. Outer spheres are solvent ions.

A colloidal solution is a uniform dispersion of two completely different types of components—particles or droplets of one phase, called the solute, in a second, typically liquid, phase, called the solvent. Milk, a colloid of tiny globs of butterfat in water, is one of the most familiar.

Up to now, colloids have nearly exclusively been formed in polar solvents such as water or in organic solvents. Dispersions of silica particles in molten inorganic salts have been made before, but they have been metastable—that is, their colloidal form eventually breaks down.

Now, Dmitri V. Talapin of the University of Chicago and coworkers report the first stable colloids of nanoparticles in several types of molten inorganic salts (Nature 2017, DOI: 10.1038/nature21041). They also propose a mechanism behind the new colloids’ stability.

Such nanoparticle colloids could improve the heat transport properties of molten salts, which are used as heat-transfer fluids in nuclear reactors and solar-energy facilities. The work could lead to new types of nanomaterials by making it possible to synthesize them in molten salts at temperatures much higher than are currently feasible with ordinary solvents. And the new colloids could result in more-efficient inorganic thermoelectric materials by enabling researchers to engineer them in new ways.

Over the past few years, Talapin and coworkers developed an improved understanding of the inorganic surface chemistry of different materials that enabled them to select combinations of materials that form stabilized colloids. They make stable colloid dispersions by transferring surface-modified nanocrystals from organic solvents to molten salts or by mixing modified-nanocrystal powders directly with molten salts. In this study, they incorporated metal, semiconductor, rare-earth, and magnetic nanocrystals into AlCl3/NaCl/KCl and six other types of molten inorganic salts.

Conventional colloids are stabilized by electrostatic or steric forces that prevent solute particles from aggregating. But Talapin’s group proposes a new mechanism for the stability of molten inorganic-salt colloids: Strong solute-solvent chemical bonds that form at the nanocrystal surface induce partial ordering of the molten salt around each nanocrystal. The researchers’ theoretical analyses and molecular dynamics modeling suggest that this induced ordering in the molten salt prevents the particles from combining.

Colloids expert Håkan Wennerström of Lund University says he remains skeptical for now about some technical details of the mechanistic proposal. However, he says, the study’s observations are “clear-cut and carefully made” and the chemical bonding-based mechanistic proposal is “convincing.” It’s important “for materials science and technical applications to have methods for handling metals, alloys, and semiconductor materials in the form of colloidal particles in a solvent that can take a high temperature like a molten salt,” Wennerström adds.

Materials
Stable colloids made with inorganic molten salts
Physical Chemistry
Tracking Electrons In Ionic Liquids
Materials
Ionic Liquids Stable At High Temps
Share X
To send an e-mail to multiple recipients, separate e-mail addresses with a comma, semicolon, or both.
Title: Stable colloids made with inorganic molten salts
Author: Stu Borman
Chemical & Engineering News will not share your email address with any other person or company.

Comments
ilmutdin abdulagatov (February 22, 2017 4:27 PM)
Surfase modified nanoparticles are good way to improve the heat trasfer phenomena. This is allowing to control the structure of the transition zone around the nanoparticles which play role in heat transfer processes.
You are in right direction and doing good job. Thanks.
Reply »