What are sports drinks, and do regular athletes need them?

The tasty mixtures of water, sugar, and electrolytes are useful for elite endurance athletes but probably not for normal fitness fans 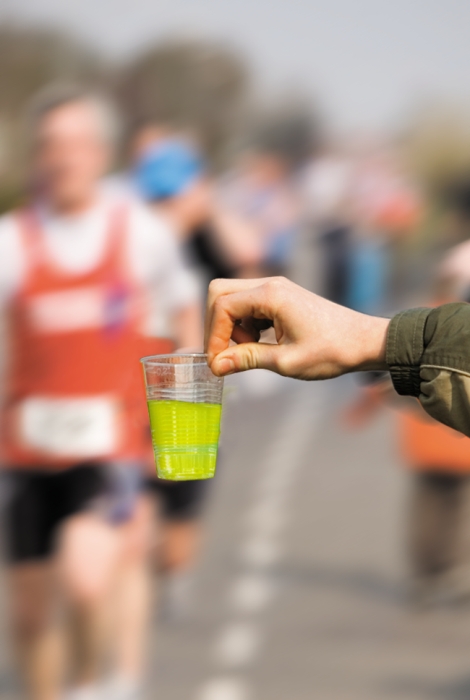 Ryan Smith knows what it’s like to sweat: As a veteran of four Ironman competitions—an endurance triathlon that includes a 3.86-km swim, a 180.25-km bike ride, and a full 42.40-km marathon—Smith has experienced first-hand the urgent need to replenish his body’s lost fluid and electrolytes. Now, with two small children at home in Alexandria, Va., Smith’s hydration needs have changed. When he traded in his elite triathlon training for a 24-km ride to work one or two days a week, he gained a new perspective on the need for sports drinks. “The stuff I had been using for some of those more intense training sessions—I found it overkill,” Smith says. He used to be concerned about not getting enough calories on his longer workouts. Now, “lots of times, I don’t even take a sports drink with me unless I’m going on an eight-mile or longer run.”

As a recreational exerciser, Smith has entered a realm that many people occupy: working out for health and averaging under an hour of exercise per day. Sports drinks, which are designed to help people perform their best during physical activity, are a $6.6 billion market in the U.S., according to Chicago-based market research firm Information Resources. But many sports scientists agree that most people, including your average jogger, probably don’t need these rehydration drinks, even if they taste refreshing.

The essential formula for sports drinks has changed little over the years. They contain sugar for energy, water for hydration, electrolytes such as salt to help with water retention, plus color and flavoring. Formulators play around with the sources and relative concentration of these ingredients to make sure they end up where they’re needed in the body as quickly as possible.

Of course, a sports drink’s primary function is to prevent dehydration. According to Nancy J. Rehrer, an exercise metabolism expert at the University of Otago, elite athletes performing in hot environments are most at risk. The stomach can process roughly a liter of fluid an hour, so if the intensity is high enough, athletes may lose fluid faster than their gastrointestinal tract can absorb it, Rehrer says.

Both Rehrer and Stavros Kavouras, director of the hydration science lab at the University of Arkansas, recommend elite athletes follow a rehydration regimen, such as consuming sports drinks at specific times throughout a competition in extremely hot climates to combat this deficit. But both say drinking water to quench thirst is fine for your average exerciser. That being said, Rehrer warns that first-time marathoners can overdo it on the water and cautions against hyponatremia, a dangerous condition that can result from consuming too much water too quickly.

Sodium is the most common electrolyte in sports drinks. It helps the body retain fluid by maintaining osmotic pressure in blood vessels. The amount of salt released in sweat during a given activity varies by individual. Achieving the right amount can be a balancing act for manufacturers: Too much salt tastes bad, but too little won’t replace what an athlete needs. For this reason, sports drinks generally contain about 20 mM of sodium at most, which is on the lower end of what average people lose in their sweat.

Supplemental sodium can be crucial for elite athletes, but Rehrer and Kavouras agree that it’s not necessary unless you plan to exercise for a significant amount of time. “If your goal is just to go to the gym and do a 45-minute workout,” Kavouras says, “water is more than enough to keep you hydrated.” According to Rehrer, most people take in enough sodium by following a typical Western diet.

Finding the right amount of sugar is another tricky feat: Too much lowers the rate at which the drink empties from the stomach and enters the bloodstream, but too little means less energy and a possibly unpalatable drink given the added salt. As a result, an average sports drink contains about 3–7% sugary carbohydrate. Formulators experiment with mixing various types of sugars, such as glucose, fructose, sucrose, and maltodextrins, so as not to overload any one type of transporter in the gut.

This added burst of fuel can be nice, but for someone trying to lose weight, “you are taking on extra energy that isn’t necessary,” Kavouras says. “It’s like you’re eating extra food.” Even for elite athletes, Rehrer says, it may make sense to save the carbs for a big event rather than for training: “Every day is not a race. Sometimes you just want to adapt and get your body in a good place.”

In addition to these three main components, drink developers experiment with other add-ins, such as proteins and branched-chain amino acids to help with muscle repair and growth. But these also run the risk of being absorbed inefficiently in the gut and thus slowing down the overall absorption of other, more essential components of sports drinks. “You have two things to think about: How fast is it going to leave the stomach, and how fast does it get transported across the intestinal epithelia into your bloodstream?” says Robert Kenefick, a research physiologist at the U.S. Army Research Institute of Environmental Medicine.

“I haven’t seen sufficient evidence that consuming protein during exercise is going to enhance performance in any way,” Rehrer says. The ideal time to consume it, she says, is in the one- to two-hour window after exercise, when amino acid transport from the gut is heightened.

Kenefick notes that additional ingredients, such as the antioxidant quercetin, repeatedly pop up in sports drinks. Others, such as the neurotransmitter GABA, have more recently been incorporated after preliminary findings in research laboratories. “There might be a study or two that shows a benefit, and so a manufacturer will grab onto it and put it in there,” he says. “But a lot of times, these things don’t really pan out.” Industry trends in recent years have been to decrease sugar and incorporate more exotic, naturally derived ingredients, such as coconut water and sea salt. Caffeine isn’t present in every beverage, but Kenefick says its benefits as a stimulant during exercise are well established.

Smith always keeps a drink on hand for recovery after a workout and appreciates that he can now walk into a store and buy a sports drink that contains naturally derived ingredients, which hasn’t always been the case. Back in his Ironman days, Smith worked with a custom manufacturer to make his own tailor-made concoction. “There’s nothing more motivational than someone’s grandmother blowing past you at mile 24 of a marathon,” Smith says. “I’d like to know what’s in her sports drink.”

UPDATE: This article contains additional reporting by Lauren K. Wolf. It was modified on Feb. 21, 2017, to refresh its information and data.

Food Ingredients
DSM seeks approval of additive that minimizes methane from cattle
Food Ingredients
DSM and Avril to launch canola protein food ingredient
Food Ingredients
Solabia buys algae firm Algatech
Share X
To send an e-mail to multiple recipients, separate e-mail addresses with a comma, semicolon, or both.
Title: What are sports drinks, and do regular athletes need them?
Author: Alexandra A. Taylor
Chemical & Engineering News will not share your email address with any other person or company.