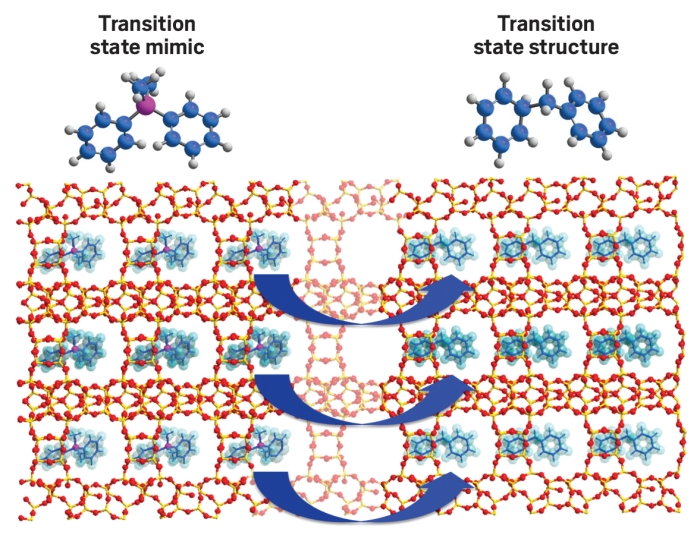 Credit: Avelino Corma/ITQ Valencia
To make an active zeolite catalyst with pores that match the structure of a given reaction transition state (right), researchers used a transition state mimic (left) as a structure-directing agent to synthesize the zeolite.

Endowed with a network of interconnected, molecule-sized pores and channels, zeolites have been used in chemical separations, oil refining, and catalysis for decades. Yet scientists still tend to use a trial-and-error approach to find the best member of this large family of crystalline materials for a given application.

Researchers in Spain may have come up with a way to shorten and reduce the cost of that time-consuming search process. Their strategy is to tailor-make zeolite catalysts with pores that closely match the proposed transition state structure of a given reaction. They find that the customized zeolite outperforms commercial zeolite catalysts commonly used for that reaction (Science 2017, DOI: 10.1126/science.aal0121).

In one example of this approach, the team, which was led by Avelino Corma, the director of the Institute of Chemical Technology at Polytechnic University of Valencia, produced catalysts for the production of xylene from toluene. That reaction, which is carried out commercially mainly with ZSM-5 and mordenite zeolites, converts two toluene molecules to one molecule of benzene and one of the dimethylbenzene isomers (o-, m-, or p-xylene).

Based on earlier studies, researchers have proposed that the reaction proceeds by way of a transition state featuring a complex made of two phenyl rings joined by a positively charged carbon atom. A zeolite catalyst would need pores big enough to accommodate that structure, which is larger than the reactants and the products.

So the Valencia team selected a diphenylphosphonium compound that closely mimics the structure and charge of the transition state and used it as a structure directing agent (SDA) to synthesize a zeolite. All zeolites are aluminosilicate minerals. The team produced their zeolite catalyst, called ITQ-27, by allowing the mineral to crystallize around the diphenylphosphonium molecules. They then heated the zeolite to remove the organic material, leaving an aluminosilicate frame with pores matching the SDA and the transition state structure.

Then the team compared the performance of ITQ-27 with that of ZSM-5, mordenite, and other zeolites. They found that although some of the zeolites had a larger number of catalytic sites than ITQ-27, the custom-made ITQ-27 was the most active catalyst. It was also as selective or more selective, meaning it produced fewer by-products, than the other catalysts.

In another example of the transition state strategy, Corma and coworkers successfully synthesized zeolites for ethylbenzene isomerization.

This approach, which represents “a new paradigm in zeolite science, may accelerate discovery of highly active and selective zeolite catalysts,” says Roberto Millini, a specialist in materials chemistry and catalysis at Eni, an oil and gas company based in Italy.

Millini notes that in addition to improving the efficiency of petrochemical processes, this strategy may enable new applications for crystalline porous materials. For example, these materials may provide environmentally benign routes for converting biomass to biofuels and chemicals.

James Poole (March 16, 2017 1:40 AM)
Except perhaps for particular choices of elements, this appears to be old technology. US companies including Union Carbide and Texaco have been synthesizing such structures (often known as non-zeolitic molecular sieves) for at least 20 years, and hold numerous patents.
Reply »