Making antibodies minus the cells 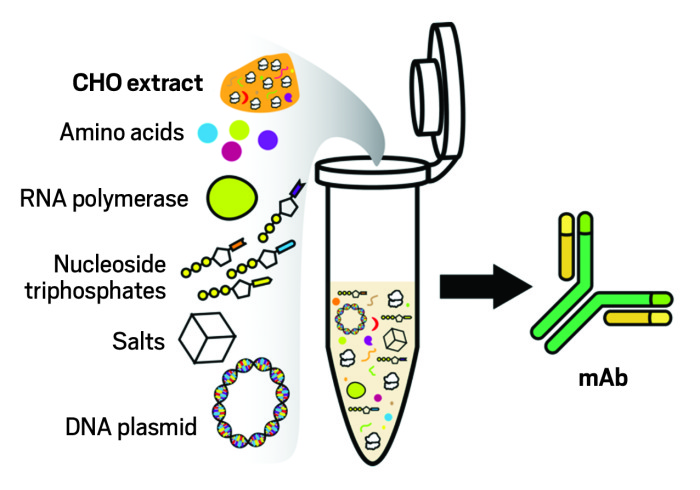 In the development of protein therapeutics, optimizing the interaction between the drug and its target is only half the battle. Drug developers often tweak the protein’s underlying DNA sequence and conduct time-consuming screens to identify the variants that give the highest yields when expressed in cells. Now, researchers have developed a cell-free protein synthesis platform to speed up this screening process (ACS Synth. Biol. 2017, DOI: 10.1021/acssynbio.7b00001).

Investigators can engineer monoclonal antibodies that bind to a wide range of antigens, which allows them to make protein-based medications for cancer, autoimmune diseases, and other conditions. They prefer to use mammalian cells for synthesis because the cells modify proteins in ways that reduce the risk of the antibodies triggering an immune response. Chinese hamster ovary (CHO) cells are used to produce nearly 70% of therapeutic monoclonal antibodies. “The problem or challenge with using CHO cells is it takes a long time to express protein,” says Michael C. Jewett of Northwestern University. “It takes a minimum of seven days.”

To get high expression yields in CHO cells, researchers screen hundreds of DNA versions of a therapeutic antibody to optimize interactions between the gene and the cell’s transcriptional and translational machinery. To cut down on screening time, Jewett and colleague Varnika Roy of Medimmune wanted to take the cell out of the equation for these initial tests.

The researchers purchased a commercially available CHO extract that provides the normal cellular machinery for making proteins without the constraints of a cell membrane or need for a living organism. Such extracts typically include amino acids, cofactors, and an energy source, to which researchers add a DNA plasmid containing the nucleic acids encoding for the protein of interest. For these studies, they used mAb-A, a standard antibody used by MedImmune, for which they had plasmid DNA.

But Jewett and Roy ran into some initial problems right out of the box, in an initial test to make sure that the extract didn’t harm the final monoclonal antibodies. “When we added purified antibody into the CHO extract, it just fell apart,” Jewett says. The problem was that antibodies consist of four protein subunits, held together by disulfide bonds that only form in an oxidizing environment, which the CHO extract didn’t provide. So, the researchers added glutathione, a chemical oxidizing agent, to the cell-free mixture, which fixed the problem.

Then, the researchers tested expression of mAb-A with added glutathione in the cell-free system. Later they added isomerase enzymes to the reaction mixture to ensure that the disulfide bonds formed in the correct positions. This addition increased the synthesis of the full-length antibody, thus boosting the yield.

Once all the pieces were in place, the researchers tested the complete system and let the reaction cook for 24 hours. They confirmed with an assay that the synthesized monoclonal antibody could bind its antigen.

“If you are trying to screen a whole bunch of mutants, the cell-free extract is a great place to do that,” says Bradley C. Bundy of Brigham Young University. “It could speed things up but also potentially reduce costs.” Researchers can easily control the size of the reaction and make just the amount they need for a screen, he adds.