Stretchy holograms made from a metamaterial

[+]Enlarge
Credit: Nano Lett.
A stretchable hologram made of a polymer and gold nanorods (left) brings three different images into view, depending on how much it’s stretched. 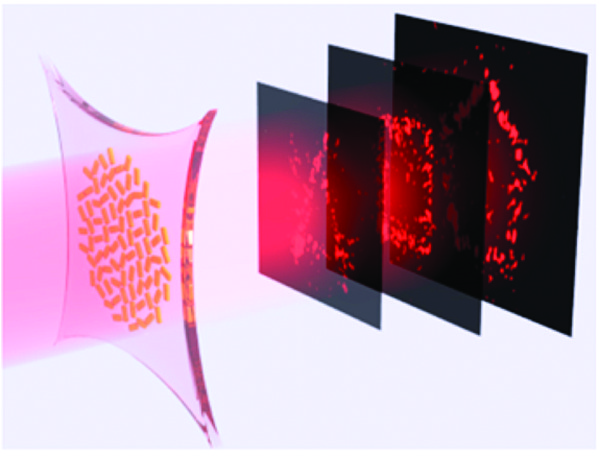 Credit: Nano Lett.
A stretchable hologram made of a polymer and gold nanorods (left) brings three different images into view, depending on how much it’s stretched.

Holograms record and display realistic three-dimensional images that appear to float over a surface. One day they might be used to immerse viewers in virtual worlds or simply provide ultra-realistic video calls—that is, if the holographic images could be made to move. Now researchers have created holograms that display different two-dimensional images when stretched (Nano Lett. 2017, DOI: 10.1021/acs.nanolett.7b00807). Although they can only switch among a handful of images, the developers say the technology takes a step toward animated holography.

Typical holograms are made from materials such as photopolymers that form cross-links when exposed to light. Once a hologram is made from these materials, its image is fixed, says Ritesh Agarwal, a materials scientist at the University of Pennsylvania. He and his colleagues work on a class of materials called metasurfaces: flat, thin films that contain nanostructures designed to shape and reflect light. “The idea is to have complex optical functionality on a flat plane,” Agarwal says, “whereas most optical components are bulky, like a curved lens.”

Last year, his group made a metasurface lens from a square of stretchy polydimethylsiloxane (PDMS) embedded with precisely placed gold nanorods (Nano Lett. 2016, DOI: 10.1021/acs.nanolett.6b00618). They showed that by stretching the metasurface lens from all four corners, they could adjust its focal length, magnifying an image by 1.7 times.

Agarwal then asked whether it was possible to make a hologram using the same PDMS and gold nanorod ingredients so that its images changed as the material stretched. Since 2012, researchers have demonstrated various kinds of metasurface holograms, but making the image change has been difficult. One approach is to design the hologram so that illuminating it with light of different polarizations changes the image. This requires additional optical elements to polarize the light, and even these systems can only switch between two images. Agarwal wanted to find a simpler solution.

First, he and his team calculated that as a hologram was stretched, the image size and its focal length—that is, how far above the surface the image would appear—would change depending on the degree of stretch. Then they used computer programs to generate hologram designs.

The group deposited gold nanorods on silicon wafers in the prescribed patterns using lithography, encoding up to three different 2-D images into the hologram. They then coated it in PDMS. After curing the polymer and peeling it off, the gold nanorods ended up about 100 nm below the surface of the PDMS, embedded deep enough that they aren’t displaced by stretching.

The different images appear at different distances, or focal lengths, from the hologram’s surface when it is illuminated with red laser light. As the material is stretched, the various images come into focus at a given focal length. For example, in one design, the hologram shows a smiling face at 60 μm distance and a frown at 100 μm. When the hologram is viewed from 100 μm and stretched, the image switches from frowning to smiling. In another prototype, a shape goes from a pentagon to a square to a triangle.

Agarwal envisions switchable holograms that can show animations; however, this is a ways off. The calculations required to generate holograms containing tens or hundreds of sequential images would be much more complicated. And stretching is probably not the ideal way to make a real display, he says.

For now, Agarwal is focused on making multicolor versions of the stretchy holograms, which will require a mix of nanorods of different sizes that can interact with different colors of light.