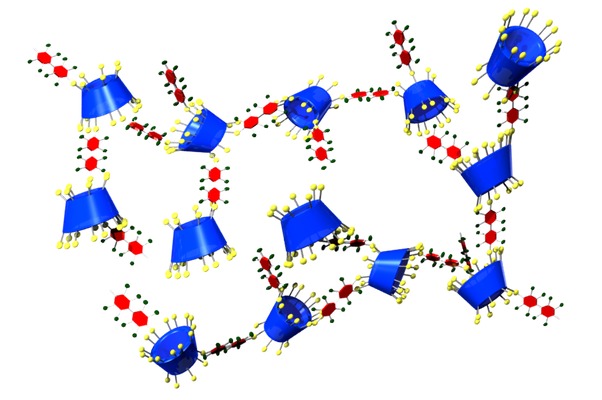 Credit: J. Am. Chem. Soc.
β-Cyclodextrin (blue and yellow) cross-linked with decafluorobiphenyl groups (red and green) has high affinity for the industrial chemical PFOA and could help remove it from drinking water.

Long-chain perfluorinated chemicals contaminate millions of Americans’ drinking water. These compounds are a legacy of industrial pollution and the use of firefighting foam at military bases and airports; they persist in the environment because of their strong carbon-fluorine bonds. Now scientists have designed a cross-linked polymer that might more effectively remove one of the more prevalent and harmful of these compounds, perfluorooctanoic acid (PFOA) (J. Am. Chem. Soc. 2017, DOI: 10.1021/jacs.7b02381).

PFOA—used to make coatings, including DuPont’s Teflon—was phased out by U.S. manufacturers in 2015 at the request of the Environmental Protection Agency. In humans, epidemiological studies have linked chronic exposure to PFOA with cancer, thyroid disease, high cholesterol, and other health issues, and low levels of exposure with immunotoxicity in children. Studies in animals have additionally linked the compound with negative effects on fetal development. 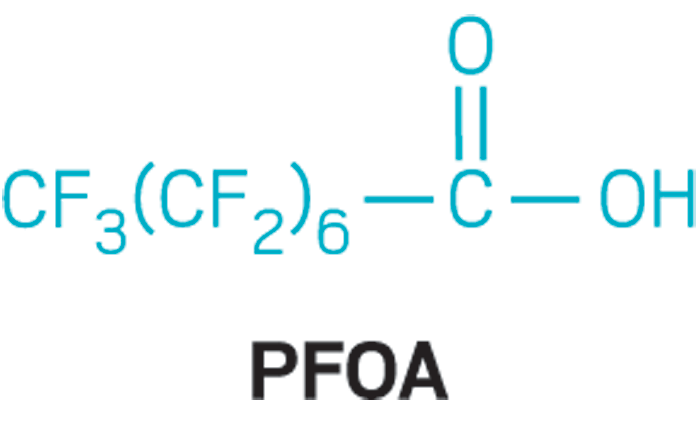 The evidence led the EPA in 2016 to set the health advisory level in drinking water at 70 ppt for PFOA and a related chemical, perfluorooctanesulfonic acid (PFOS), individually or in combination. However, some researchers suggest safe levels may be 1 ppt and below (New Solut. 2015, DOI: 10.1177/1048291115590506). The two chemicals have been found at levels over 20 ppt in 162 drinking water systems used by about 15 million people in 27 U.S. states, according to a recent report by the nonprofit Environmental Working Group and Northeastern University.

To purge these perfluorinated chemicals from water, engineers primarily use granular activated carbon as an adsorbent. But the material has limitations. “Almost anything organic sticks to it,” including other pollutants and components of natural organic matter, such as humic acid, says William R. Dichtel of Northwestern University. Once that happens, the activated carbon usually needs to be replaced. And the material does not have particularly high affinity for PFOA, so it’s inefficient at trapping the pollutant. Other options for removing these compounds include reverse osmosis, which is much more expensive than activated carbon, and anion-exchange resins, which are still at the experimental stage for this application, according to Christopher P. Higgins, an environmental engineer at the Colorado School of Mines.

Now Dichtel, Damian E. Helbling of Cornell University, and colleagues have developed an alternative adsorbent: a cross-linked cyclodextrin polymer with much higher affinity for PFOA than activated carbon. It also tends not to clog up with humic acid and can be regenerated with a methanol rinse.

β-Cyclodextrin—made of a ring of seven glucose molecules—has an inner hydrophobic pocket that is the right size to trap hydrophobic micropollutants such as pesticides and pharmaceuticals. Cyclodextrins have been studied as water purification agents and are used in the product Febreze to trap odor compounds.

Dichtel’s group previously made polymers of β-cyclodextrin by incorporating rigid aromatic cross-linkers; the resulting high-surface-area material could trap a wide range of micropollutants (Environ. Sci. Technol. 2017, DOI: 10.1021/acs.est.7b00906). But this system didn’t capture PFOA well. So they tweaked it using a cross-linker containing multiple fluorines—a decafluorobiphenyl group—counting on the tendency of fluorinated substances to stick together.

The researchers tested the polymer by adding it to water at 10 mg/L with 1 ppb PFOA, a level similar to that found in contaminated groundwater near some former industrial sites. The polymer removed more than 99% of the PFOA, bringing its concentration down to less than 10 ppt, below the EPA’s health advisory level. In comparison, activated carbon removed only 56% of the PFOA.

The researchers still have to design a practical system to continuously treat water with the soluble polymer, possibly by attaching the material to a solid substrate like a cloth or filter. Dichtel and others have started up the company CycloPure to develop and commercialize the technology. The polymer would likely cost more than activated carbon by weight, Dichtel says, “but the idea is that we will be able to use less and regenerate our polymer.”

Higgins, who was not involved in the study, calls it “really important,” especially if it can be adapted to treat other compounds like PFOS—something the team is now testing. “It’s certainly going to help us move forward with alternative technologies for water treatment of these compounds,” he says.

Higgins notes that he has some reservations about the method’s use of one highly fluorinated material to clean up another, because of the chance that the adsorbents themselves could contaminate the environment. However, he adds, water treatment facilities would have control of these adsorbent materials, and their aromatic fluorinated structure would be easier to treat and break down than PFOA if they were accidentally released.

CORRECTION: This story was updated on June 23, 2017, to correct the percentage of PFOA removed from water by the polymer.

Comments
K (June 21, 2017 7:39 AM)
Timely article considering all of the recent news re. GenX, the Dupont/Chemours PFOA replacement, river contamination in North Carolina. Will CEN be doing an article on that soon?
Reply »

Wasiu Lawal (June 22, 2017 12:02 AM)
Maybe you should send an email to cen-newsletters@acs.org, That's where they ask people to send news tips or coments,
Reply »

IKPER MOSES (June 22, 2017 6:14 AM)
VERY GOOD ARTICLE CONSIDERING THE LEVEL OF WATER POLLUTION IN DEVELOPING COUNTRIES LIKE AFRICANS.I WILL LIKE TO HAVE ACCESS TO THE FULL METHOD.THANK YOU.
Reply »

Sergio (June 22, 2017 7:48 AM)
Minerals remove PFOS at even higher rates, reaching up to 98% removal, and are not posing and microbial risk, as cyclodextrin may easily become nutrition for bacteria.

The data is on this site:

Gbadamosi, Muideen R. (July 10, 2017 6:42 PM)
This is a good research paper. Considering the high incidence of water pollution with all these organic and inorganic pollutants.
Reply »