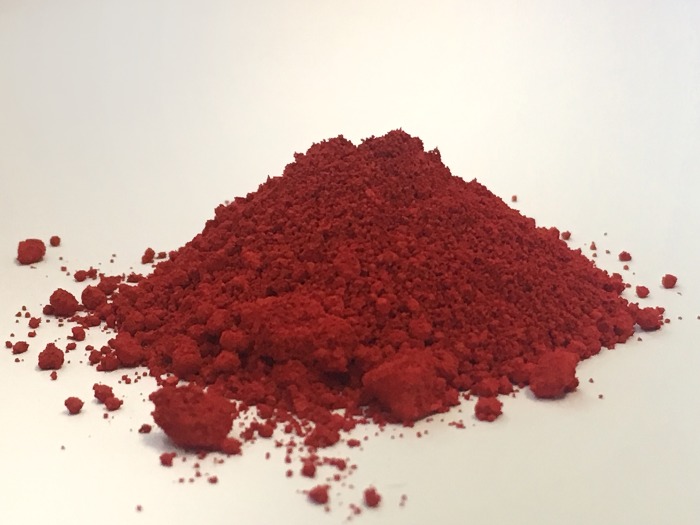 Credit: Huiting Liu
Commercial cadmium red pigment dissolves in water after exposure to visible light and sunlight but remains undissolved when kept in the dark.

Even though cadmium is considered a probable human carcinogen by the U.S. Environmental Protection Agency, it is still used to give some plastics and ceramics red, orange, or yellow hues. That’s because organic pigments are unstable at the high temperatures used to make these products, and pigments like cadmium red are thought to be relatively inert in the environment on account of their reportedly low solubility in water.

That belief has been turned on its head by a new study showing that in sunlight, a commercially available cadmium red pigment rapidly dissolves in water, releasing the toxic metal (Environ. Sci. Technol. 2017, DOI: 10.1021/acs.est.7b00654).

Some experts say the findings probably do not indicate additional risk for exposure to cadmium in consumer products. Still, the study suggests that dumping of cadmium red pigment into waterways could pose a much greater risk of contamination than has previously been thought.

Xiaolei Qu of Nanjing University and his colleagues were investigating the causes of cadmium contamination in farmland near China’s Lake Tai (often called Lake Taihu). The area’s large ceramics industry uses cadmium pigments, so the researchers wondered if the pigment might be the source of the cadmium in the soil. But the presumed low solubility of the pigment seemed at odds with this idea.

From their previous work in photochemistry, however, the researchers also knew that light can react with the salts used in cadmium red pigment—cadmium sulfide and cadmium selenide. These semiconductor compounds were once proposed for use in solar cells, but were largely rejected because light oxidizes the salts in the presence of oxygen and water, generating sulfate and selenate ions. For similar reasons, cadmium pigments in oil paintings have faded over hundreds of years, forming hydrated cadmium sulfate and other cadmium salts (C&EN, February 1, 2016, page 32).

Qu and colleagues thought that if these reactions happened in an aqueous environment, the light-driven reactions might release the Cd2+ ion, allowing it to dissolve. This chemistry could allow any pigment released into waterways to end up in nearby soil. So they tested a sample of the pigment from a commercial supplier in China.

They mixed the pigment powder into a 1 mM sodium chloride solution, to simulate the ionic strength of river water, and incubated samples in simulated sunlight and darkness. They tracked the cadmium ion concentration in the water over time with atomic absorption spectroscopy. The researchers found that 83% of cadmium in the pigment dissolved in water under simulated sunlight conditions in 24 hours, compared with less than 3% in the dark. They also mixed the pigment with a sample of river water and exposed it to sunlight; there, 39% of the cadmium was released into the water within four hours.

The rapid dissolution of the pigment in these conditions is an important finding, according to Keith Vorst of Iowa State University; it’s especially relevant in cases in which the pigment may be dumped directly into the environment.

However, Vorst and his colleague Greg Curtzwiler, who study hazardous metals in consumer plastics and packaging at Iowa State’s Polymer and Food Protection Consortium, say this phenomenon would be unlikely to enhance leaching of cadmium from intact plastics or ceramics colored with the pigment, because the pigment is locked into the solid polymer or ceramic. Qu and colleagues are now testing whether cadmium is released from various consumer products when exposed to sunlight. He says that regulators should take photochemistry into consideration when managing the disposal of cadmium pigment waste and its use in products.

In the U.S., regulations on cadmium in consumer items vary by product type. The FDA regulates the amount of cadmium that leaches from imported and domestic ceramics in acetic acid. The Model Toxics in Packaging Legislation, adopted by 19 U.S. states, prohibits the intentional use of cadmium, lead, mercury, and hexavalent chromium in packaging, and limits incidental amounts of these metals. In children’s toys, soluble cadmium in paints and coatings is limited to 75 ppm. In 2010, several consumer and environmental groups petitioned for tougher cadmium standards after high-profile recalls of children’s products containing the element, but the Consumer Product Safety Commission rejected the petition, arguing that the current standards were adequate.

Comments
E N Suleimenov (June 21, 2017 11:49 PM)
This directly indicates that sunlight is a "combination" of elementary particles. Look at our articles.
Reply »