A high-capacity, water-adsorbent metal-organic framework could help improve the performance of both water capture and adsorption cooling devices 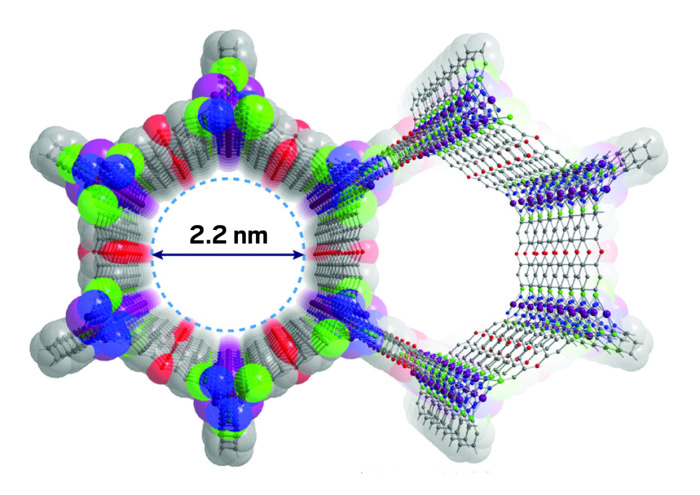 Credit: ACS Cent. Sci.
This metal-organic framework can adsorb 90% of its weight in water. Co atoms are shown in purple; C in gray; N in blue; O in red; Cl in green. Hydrogen atoms are omitted for clarity.

Materials that reversibly trap water from air could provide a vital source of drinking water in areas where it is scarce, or offer energy-efficient air conditioning. But to be commercially viable, these materials need a large water capacity and low energy requirements during water adsorption and desorption. Now, Mircea Dincă and his research group at MIT report record-setting performance for water-trapping in a metal-organic framework (MOF) that may bring both applications closer to reality (ACS Cent. Sci. 2017, DOI: 10.1021/acscentsci.7b00186).

Porous materials can spontaneously pull water out of the air even at low humidity if their pores are the right size and their interior surfaces are hydrophilic. To maximize water capacity, the pores must be spacious, but not so big that the trapped water condenses into liquid that permanently clogs them. At the sweet spot, the water adsorbs to the MOF’s pores and desorbs with modest energy input, explains study co-author Adam Rieth. “Both adsorption and desorption are very important,” he says.

In the new study, the researchers worked with a group of MOFs that had previously been used for the reversible capture of ammonia, chlorine, and bromine gases. These MOFs have just about optimal pore size—around 2 nm—and are made with manganese, cobalt, or nickel ions bound to triazolate linkers. In ambient air, the interior surface is naturally hydrophilic.

When testing the MOFs, the researchers found that water spontaneously enters the pores at as low as 28% relative humidity. At 30% relative humidity, consistent with night-time conditions in arid climates, the cobalt MOF adsorbed almost 90% of its own weight in water, approximately double that of the next-highest-performing known material. The researchers calculated that if the cobalt-containing MOF were used in a hypothetical adsorption heat pump, the trapped water could be stripped from the material at just 55 °C. This means the device could potentially be powered by waste heat from a car engine, for example.

Bo Wang, a MOF researcher from Beijing Institute of Technology who was not involved in the study calls it a “great addition” to the field. “It’s a very thorough study and helps to guide the design of MOFs.”

However, this study looked only at the MOF material. In a real-world setting whether for air-conditioning or water capture, the MOF would need to be part of a device that uses heat to release water and regenerate it. For instance, another research team recently reported a water harvesting device that used solar energy to regenerate the MOF (C&EN, April 17, page 8). The MIT team predicts that if used in the same device, the cobalt MOF would be able to deliver almost three times as much water per cycle. They are now working to test their MOFs in this context, Rieth said.

Comments
Anthony Shiaw-Tseh Chiang (June 15, 2017 11:07 PM)
The critical factor for a successful AHP system is the heat transfer rate. The material COP may be the thermodynamic driving force. It is the rate, or how fast can you cycle, that matters in real life.
Reply »