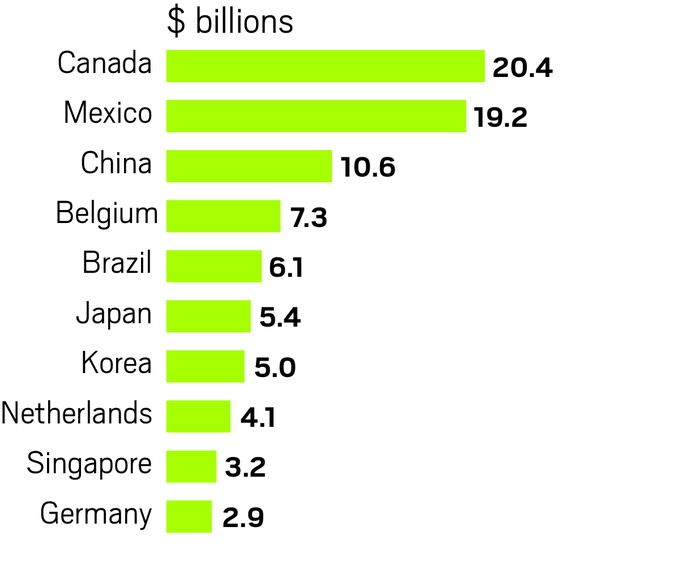 With talks aimed at revising the North American Free Trade Agreement (NAFTA) expected to start soon, chemical manufacturers and others on June 28 offered advice to the Trump Administration for updating the 23-year-old accord with Canada and Mexico.

For chemical manufacturers, capitalizing on the shale gas revolution by securing expanded access to the two largest markets for U.S. chemical exports—Canada and Mexico—is a key goal, said Greg Skelton of the American Chemistry Council (ACC), an industry trade association.

In testimony before the U.S. Commerce Department’s International Trade Commission, Skelton noted that the U.S. has a large and growing trade surplus in industrial chemicals that stands at $28.2 billion. It is “likely to grow significantly as increased production from more than $185 billion in announced new investment in domestic chemical manufacturing comes on stream,” said Skelton, ACC’s senior director of regulatory and technical affairs.

An ACC report estimates that exports of chemicals directly linked to the availability of abundant and cheap natural gas from shale, such as polymers, plastics, resins, and specialty chemicals, will more than double from $60 billion in 2014, to $123 billion by 2030.

But this increased production cannot all be consumed domestically, Skelton said. “To maximize this competitive advantage, it is essential to strengthen and expand access to key foreign markets,” he told the government officials.

The trade deal between the U.S., Canada, and Mexico, which took effect in 1994, has been blamed by President Donald J. Trump and other critics for the demise of manufacturing in the U.S., as major industries moved factories to low-wage Mexico. Trump made the promise to renegotiate NAFTA a centerpiece of his campaign last year.

The U.S. had a $63-billion trade deficit with Mexico last year, compared with a surplus of $7.7 billion with Canada, according to data collected by the U.S. Census Bureau.

However, NAFTA has greatly benefited the chemical sectors in Canada, Mexico, and the U.S. Since the deal took effect in 1994, trade in chemicals between the three countries has more than tripled, from $20 billion to $63 billion.

“After more than 20 years, modernization of NAFTA is an opportunity to upgrade the agreement to address inefficiencies and reflect procedures adopted or proposed in subsequent negotiations,” Skelton said.

A modernized NAFTA, he testified, must maintain duty-free trade for all qualifying chemical products, update rules by bringing them in line with measures adopted in more recent U.S. trade agreements, and enhance regulatory cooperation among the three nations.

With talks expected to kick off in late August, Commerce Secretary Wilbur Ross has expressed optimism the U.S. could reach a new deal with Canada and Mexico by early next year. But Trump has threatened to walk away from NAFTA if he cannot get better terms for the U.S.

If he is not satisfied with the results of the upcoming talks, Trump could pull the U.S. out of NAFTA, setting up the possibility for bilateral trade agreements with the northern and southern neighbors..