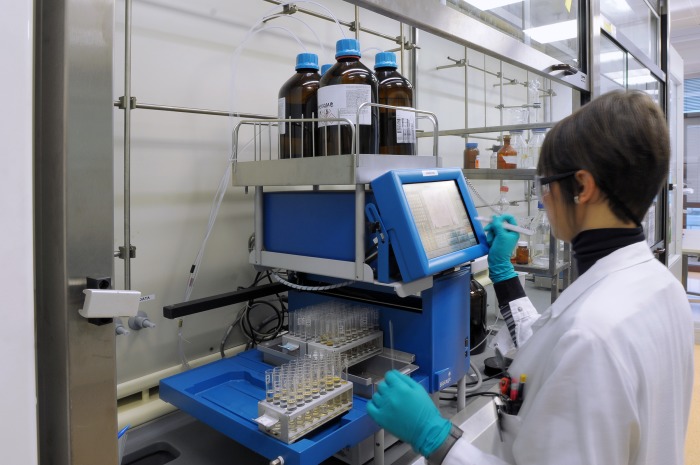 Credit: Aptuit
An Aptuit scientist at work in one of the firm’s research facilities .

In a sign that the Evotec shareholders like the deal, Evotec’s shares gained 4% on July 31, following news of the deal, giving the firm a market value of nearly $2.1 billion. The transaction is expected to close by the end of September.

Founded in 1993, Evotec’s strategy had been to offer integrated drug discovery services to customers through pre-clinical development. Evotec says the acquisition of Aptuit will extend its capabilities to investigational new drug submissions and further into drug manufacture.

Aptuit was formed in 2004 by Michael A. Griffith, former head of the pharmaceutical chemistry firm ChiRex. Today, Aptuit operates out of three sites: Verona, Italy; Oxford, England; and Basel, Switzerland. The Oxford active pharmaceutical ingredient facility originally belonged to Evotec, but Aptuit bought it for $64 million in 2007, along with a drug fill and finish operation in Scotland.

Both Aptuit and Evotec have grown by acquiring customers’ facilities. In 2015, Evotec bought Sanofi’s small molecule drug development site in Toulouse, France. The $275 million deal included the transfer of 208 chemists and other researchers to Evotec.

In 2010, Aptuit bought GlaxoSmithKline’s Verona, Italy, research site. About 500 GSK employees, most of whom were scientists, joined Aptuit.

Business
Aptuit sold for $300 million
Business
Evotec looks to acquire Cyprotex
Business
Recipharm Gets Medchem Provider
Share X
To send an e-mail to multiple recipients, separate e-mail addresses with a comma, semicolon, or both.
Title: Aptuit sold for $300 million
Author: Marc S. Reisch
Chemical & Engineering News will not share your email address with any other person or company.