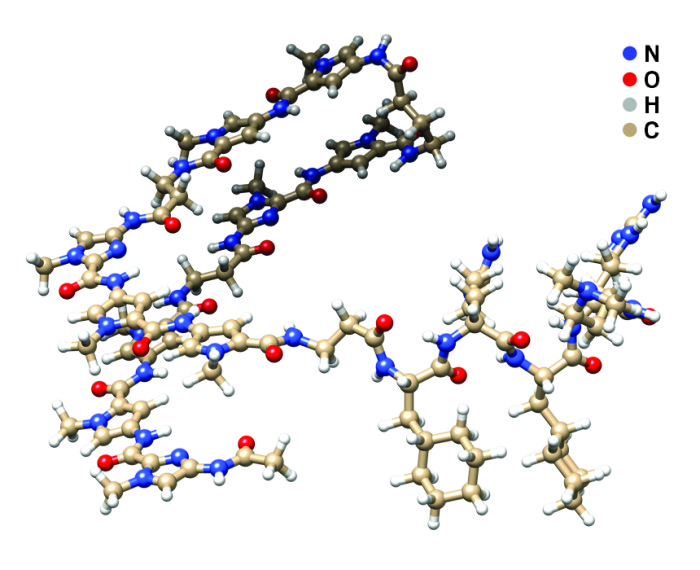 Mitochondria, the organelles which collectively serve as a cell’s powerhouse, are like miniature fortresses. Getting synthetic chemicals past this organelle’s formidable double membrane isn’t easy. As a result, scientists haven’t yet been able to develop any drug treatments that address the core problems underlying mitochondrial disorders, which can be deadly. Now, researchers have developed a peptide-like molecule that penetrates this membrane and targets the mitochondrial genome (J. Am. Chem. Soc. 2017, DOI: 10.1021/jacs.7b05230). The agent inhibited the expression of a gene associated with nerve and muscle diseases in cells.

Over the past couple of decades, scientists have developed chemicals that modify gene expression called pyrrole-imidazole polyamides (PIP), peptide-like polymers that consist of non-natural amino acids with pyrrole or imidazole rings. Using a simple recipe worked out decades ago, researchers can design the sequence of pyrrole and imidazole residues to target and bind to specific stretches of DNA, using them as a tool for silencing genes. When such agents target the promoter region of a gene, they block a transcription factor from binding there and starting the expression of that gene.

Scientists have been making progress toward polyamide-based therapeutics that work on the nuclear genome, but the mitochondrial genome has remained untapped. “Mitochondrial diseases have a high occurrence, and there haven’t been any drugs developed yet that target these diseases,” in part because of the difficulties associated with delivery, says Ganesh N. Pandian of Kyoto University’s Institute for Integrated Cell-Material Sciences. The breakthrough came when Pandian, Hiroshi Sugiyama, and their team found a study reporting on a peptide designed to pass through the mitochondrial membrane (Chem. Biol. 2008, DOI: 10.1016/j.chembiol.2008.03.015). The peptide combines lipophilic amino acids that assist with passage through the membrane barrier and positively charged amino acids that target the molecule to the interior of the mitochondria, which is negatively charged.

In a proof-of-principle experiment, the researchers linked the mitochondria-penetrating peptide to a PIP designed to bind to the promoter region of ND6, a gene associated with several mitochondrial disorders, such as a neurometabolic syndrome called Leigh’s disease and a degenerative eye disease called Leber’s hereditary optic neuropathy. The researchers added the agent at a concentration of 10 µM to a human cell culture. After 24 hours, cells treated with the agent produced 90% less ND6 compared with untreated cells. Cells given PIP without the mitochondria-penetrating peptide had no change in ND6 levels. As a final analysis, the researchers tagged the mitochondria-targeted PIP with a fluorescent dye and imaged the live cells to verify that the agent indeed collected in the organelle and remained out of the nucleus.

“This paper brought a big smile to my face because it’s something I never thought of,” says Joel M. Gottesfeld of the Scripps Research Institute. “In fact, I’ve never heard of targeting mitochondrial transcription by any means.” Other methods of silencing genes such as using short interfering RNAs became more popular, putting PIPs “on the backburner,” Gottesfeld says. Mitochondria present a huge drug delivery challenge, he adds, and in those cases, smaller molecules like PIPs show a lot of potential.

Comments
James Leeder (July 20, 2017 3:50 PM)
While Some LHON cases are associated with a mutated form of ND6 rediced Complex 1 effficiency, increased free radicals and lowered ATP production. The patient is likely to be homeoplasmic or have a high prrcentage if mutated copies. Switching these off would surely halt or severely reduce Complex 1 production. It is not clear how this would lead to a beneficial outcome for a patient. An unaffected version of the ND6 gene would have to be introduced so that cells can continue to build Complex 1 orotiens and restore healthy function.