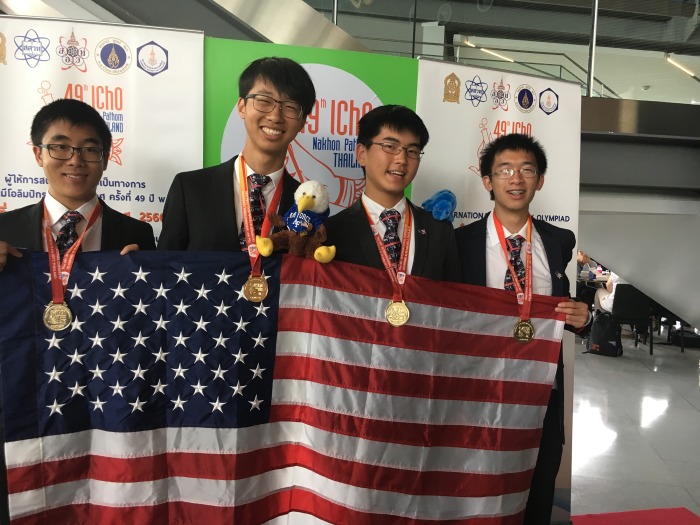 The U.S. team made history at the 49th International Chemistry Olympiad (IChO) in Nakhon Pathom, Thailand, which will conclude on July 15.

The medals were announced during the closing ceremony on July 14. Taiwan (Chinese Taipei) was the only other country to receive four gold medals. The top scoring gold medal went to a high school student from Russia. In total, 297 students from 76 countries participated in the weeklong competition. The IChO committee awarded 36 gold medals, 65 silver medals, and 95 bronze medals.

“We’re elated,” says mentor Michael Danahy. “This was the best the U.S. has done as a team ever at this competition. This is a fantastic representation for our country that we can perform well on this level. We talk a lot in our country about science education and turning out great chemists and great scientists, and these kids are that next generation of great chemists and great scientists.”

Wang says it was a surreal moment when the medals were being announced. “They started with bronze, then silver, then gold,” he says. “After all the silvers were announced, we realized we were all getting golds. It was really exciting. Amazing, actually.”

“The adrenaline rush was incredible,” Park says. “I was really excited; there’s no way to describe it.”

Liu says part of what made the team so successful is that each member brought their individual strengths, and their skills complemented each other. In addition, “we studied really hard, and I think that paid off,” he says.

“In the study camp, we did a lot of mock practice exams,” Yap says. “When taking the test this time, we felt very comfortable because we had done it so many times already at the study camp.”

He says that in addition to the medals, he has gained so many new friends around the world. “It’s an honor to represent the U.S.,” he adds.

The competition consisted of a five-hour theoretical exam plus a five-hour practical laboratory exam. In the practical exam, Danahy says the students were asked to complete an organic synthesis, deduce pH using spectroscopy methods, and do titrations of saturated salt solutions to figure out the concentration of ions in an unknown solution.

During the competition, students also participated in excursions that introduced them to the culture of host country Thailand. “The people of Thailand are so hospitable, warm, and welcoming,” Danahy says.

Liu, Yap, and Wang will be starting college at Massachusetts Institute of Technology in the fall. Park will be a senior at Lexington High School. In addition to Danahy, the team was accompanied by mentors Patrick Chan of Benjamin N. Cardozo High School in New York City and Christine Saber of Gannon University.

Comments
Hasan Zaman (July 14, 2017 5:51 PM)
Congratulations to Team USA.
All are seems the children of immigrants to USA.
Reply »

Bozhi Tian (July 15, 2017 7:02 PM)
Congratulations to the team.
Harrison, we are so proud of you and your accomplishments! Great to have you in the lab, and good luck at MIT!
Reply »

sushil kumar gupta (July 16, 2017 10:38 AM)
We appreciate & congratulate
The team mambers of united states of America

Prof. P. Shing Ho (July 19, 2017 3:35 PM)
Congratulations to this outstanding team.
For all those who decry the quality of the country's education system, the performance by this group of talented students is evidence that "public" does not equate with "poor."
Reply »

Richard Ledesma (July 19, 2017 3:52 PM)
Congratulations on your gold medal win! All of your individual talents and strong team work has paid off. You have a great future ahead of you. Best wishes.
Reply »

Dalvaro weaver (July 22, 2017 5:41 PM)
Are there undergraduate and graduate completions of this nature? I would like to participate in one of so.
/s/dalvaro weaver
Reply »