Move comes in the wake of major accidents 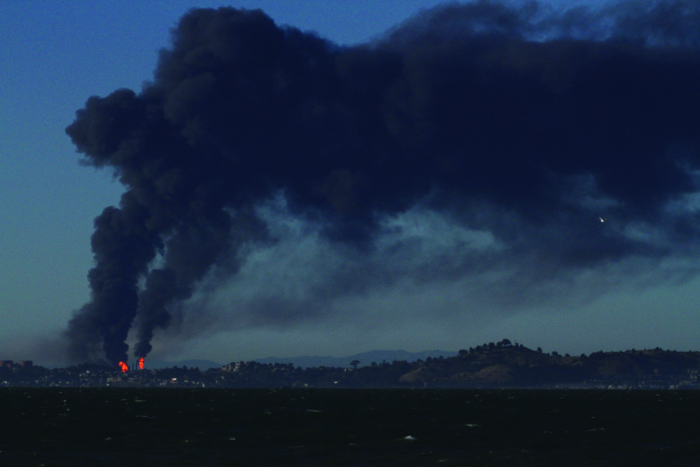 Credit: U.S. Chemical Safety & Hazard Investigation Board
A 2012 accident and fire at a Chevron refinery in Richmond, Calif., caused 15,000 residents to seek medical aid and brought about tough new regulations for California refineries.

California is requiring its 15 refineries to adopt comprehensive new requirements to improve safety for workers and communities around the facilities.

Regulations that the state issued on Aug. 4 call for refineries to adopt inherently safer designs and systems to the “greatest extent feasible” and increase employer responsibility for the safety of refinery equipment. Those rules authorize workers to shut down equipment in the event of unsafe conditions and allow anonymous reporting of safety hazards to state officials. They also require root cause analysis when an incident results in a major accident or near miss.

The regulatory changes sprang from a state review of refineries after a 2012 accident at a Chevron refinery in Richmond, Calif., at the northern tip of the San Francisco Bay. The accident sent plumes of smoke and particles into the air and led 15,000 residents to seek medical aid.

“These are landmark changes,” says Erika Monterroza, spokesperson with the California Department of Industrial Relations, of the new regulations. She explains that the state created a broad task force made up of community members, workers, and industry, state, and local agencies to develop the regulations.

Three years after the state began its regulatory review, another accident, this one at the ExxonMobil refinery in southern California, increased the state’s focus on refinery safety. The second accident, in Torrance, sent debris into the community and involved a close call with a storage tank filled with toxic hydrofluoric acid.

Like many of California’s 15 refineries, the Richmond and Torrance facilities are located in densely populated areas, where houses abut the refinery fence lines. The Richmond and Torrance accidents resulted in detailed and controversial reports by the federal Chemical Safety & Hazard Investigation Board (CSB). CSB Chairperson Vanessa Allen Sutherland applauds the new regulations and notes that they include many board recommendations.

However, Catherine Reheis-Boyd, president of the Western States Petroleum Association, says, “Our members’ commitment to improving refinery process safety has made refineries in California the safest and cleanest in the world. The new regulations ignore that fact and were developed with little consideration of the impacts on our state’s economy or workforce.”

In the past, California regulators conducted two to three refinery inspections annually, each taking a single inspector 80 hours to complete. It will now deploy four to five inspectors for four inspections per year and increase time allocation to 2,000 hours per planned inspection, says Monterroza. Also the state plans to invest 900 hours on average for start-up inspections after a process shutdown, which can be particularly problem prone.

Some of the new requirements are similar to final federal risk management plan modifications that the Obama Administration issued last December and the Trump Administration suspended in March.