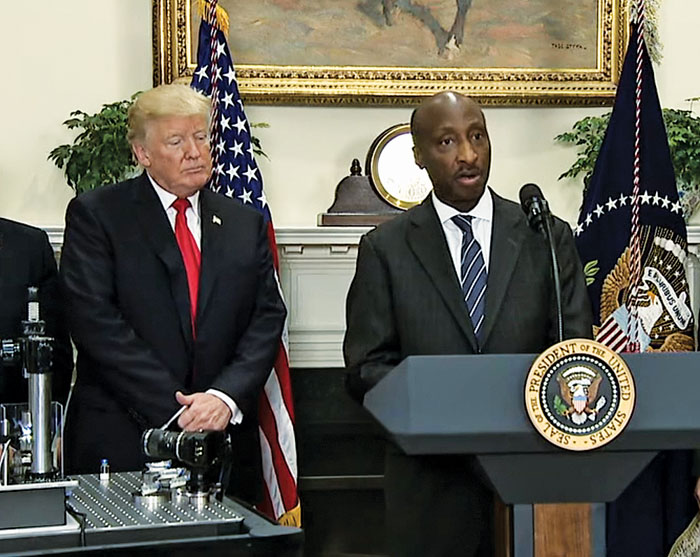 Kenneth Frazier, CEO of the drug company Merck & Co., resigned from President Donald J. Trump’s American Manufacturing Council on Monday morning Aug. 14 in response to the President’s statements after the violence in Charlottesville, Va., over the weekend.

Frazier, who was the only African American member on the council, objected to the President’s failure to specifically denounce the actions of white nationalists whose gathering in the city provoked the unrest, which resulted in one death.

“America’s leaders must honor our fundamental values by clearly rejecting expressions of hatred, bigotry, and group supremacy, which run counter to the American ideal that all people are created equal,” Frazier said in a statement.

Trump, whose condemnation of violence coming from “many sides” has drawn ire across the political spectrum, was quick to respond to Frazier’s announcement on Twitter: “Now that Ken Frazier of Merck Pharma has resigned from President’s Manufacturing Council, he will have more time to LOWER RIPOFF DRUG PRICES!”

In a midday statement on Monday that began with comments on trade, the President denounced racism as evil, specifically condemning the Ku Klux Klan, neo-Nazis, and white supremacists. Dow Chemical CEO Andrew Liveris, who heads the President’s council, issued a statement later in the afternoon condemning the violence in Charlottesville, denouncing “racism, hatred, and bigotry,” and pledging continued support for the President’s manufacturing jobs initiative. Johnson & Johnson, whose CEO Alex Gorsky is also on the council, tells C&EN that a statement from the company is forthcoming.

As of Tuesday afternoon, three other council members announced their resignations—Brian Krzanich, CEO of Intel; Kevin Plank, CEO of Under Armour; and Scott Paul, president of the Alliance for American Manufacturing. Trump responded with yet another tweet: “For every CEO that drops out of the Manufacturing Council, I have many to take their place. Grandstanders should not have gone on. JOBS!”

Comments
Bettie Sue Masters (August 16, 2017 4:19 PM)
And now we hear that President Trump is dissolving these Advisory Councils. This is not surprising. Since he neither solicits nor heeds advice, why would he have constituted such councils, as they are but shams, and why would anyone of any credibility wish to serve on them?
Reply »