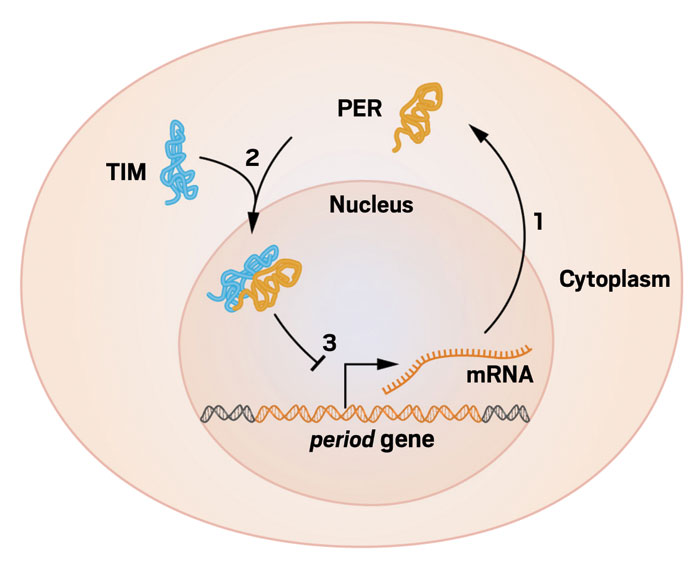 Credit: Nobel Assembly at Karolinska Institutet
Organisms’ biological clocks are controlled by oscillations in the level of PER, a protein produced from the period gene (1). When complexed with the TIMELESS protein, or TIM (2), PER accumulates in the nucleus, where it inhibits period gene activity (3).

The 2017 Nobel Prize in Physiology or Medicine has been awarded to Jeffrey C. Hall, , and for their pioneering efforts to elucidate the molecular mechanisms that drive organisms’ inner biological clocks. The prize, which is worth approximately $1.1 million, will be split equally among the three winners.

Biological clocks, which allow organisms to adapt to the daily light cycles associated with Earth’s rotation, control many biological functions, including hormone levels, sleep, body temperature, and metabolism. In humans, temporary disruption of these 24-hour circadian clocks as a result of travel causes jet lag. Chronic disruptions, such as those experienced by people who work night shifts, can lead to increased risk of various diseases. Scientists are now looking to improve treatment of cardiovascular and other diseases by coordinating delivery of drugs with a patient’s clock.

This year’s “laureates unraveled the first, coherent molecular mechanism for a circadian clock and unquestionably led this field,” says Andrew Millar, who studies biological clocks at the University of Edinburgh.

In 1984, Hall and Rosbash, collaborating at Brandeis University, and Young, at Rockefeller University, independently isolated a gene in fruit flies that controls daily biological rhythm. This gene, called , encodes a protein called PER, whose amounts peak at night and decline during the day.

Young discovered genes that encode other proteins involved in regulating PER’s cyclic production in cells. The Timeless protein binds to PER and helps shuttle it from a cell’s cytoplasm into its nucleus, where it can inhibit the expression of the period gene. The Doubletime protein is a kinase that phosphorylates PER to increase its degradation and thereby slow its accumulation, helping keep the 24-hour clock on time.

“The fundamental discoveries of how the circadian clock regulates the daily cycles of human physiology have important implications for pharmaceutical drug development,” says , a research professor at the Eshelman School of Pharmacy at the University of North Carolina, Chapel Hill, who when he worked in the pharmaceutical industry. “The efficacy, toxicity, and metabolism of drugs can be influenced by the clock, providing opportunities to optimize time and frequency of dosing of new and existing drugs.” Unfortunately, he says, the pharmaceutical industry is not yet fully harnessing the knowledge of circadian clocks during drug development.

All the circadian clock proteins are shared in eukaryotic organisms from fruit flies to humans. But they are not universal: Cyanobacteria have a different kind of internal clock that depends on sequential protein phosphorylation.

“Circadian clocks are nearly ubiquitous among more complex, eukaryotic cells but apparently not among prokaryotes,” Edinburgh’s Millar says. “It’s possible that there are other, still broader, principles to discover which govern the temporal organization of all cells.”

Comments
tvs (October 2, 2017 11:55 AM)
Nice to see this important field (which was established by the late Franz Halberg who coined the term circadian rhythm http://halbergchronobiologycenter.umn.edu/home/franz-halberg) receive this honor.
Reply »

Olivia (October 3, 2017 2:00 AM)
How or what role does having PTSD play on circadian rhythm on a mature women? Congrats from 🇨🇦. Warm regards,
Olivia
Reply »

Colleen Macmillan (October 3, 2017 10:32 PM)
Congratulations! I am very curious to learn if the suprachiasmatic nuclei are part of your studies. I became interested in this little structure as a lay person in the mid-1990's and would appreciate any updates. Again, thank you for your dedication.
Reply »

Rinki (October 4, 2017 9:49 AM)
I M Rinki kumari PhD student I have done work with clock gene in FST rat model of depression...and also seen the effect of herbal drug on the expression of clock gene..I found very interesting result..... this is Nice work...
Reply »

Sam (October 4, 2017 1:02 PM)
Circadian rhythms is so obvious that when you think about it, how do you study it? Picking the genes from over 20,000 of them, I have absolutely no clue. You have to admire the discovery of the key proteins that control the internal clock. This is only possible through basic research that is currently facing challenges when people are flocking to find a cure for diseases quickly.
Reply »

Virginia Woodrow (October 7, 2017 9:54 AM)
As a psychiatrist, I find this work fascinating and I expect it will help many of my patients in the near future. Thank you.
Reply »

Rebecca Saxena (October 18, 2017 6:35 PM)
I am interested in finding out if light pollution has an effect on the proteins affected by our circadian rhythms. Congratulations to Jeffrey C. Hall, Michael Rosbash, and Michael W. Young!
Reply »