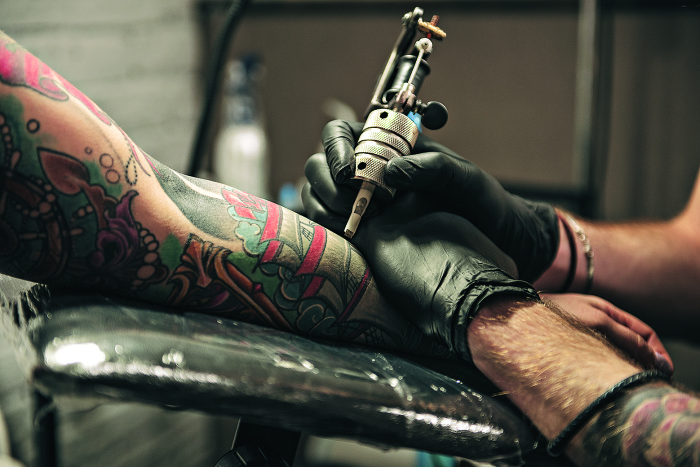 Credit: Shutterstock
Nanoparticles from tattoo ink can travel from the skin to lymph nodes, according to a new study.

Hard evidence has emerged that nano-sized particles from tattoo inks travel from the skin where they’re embedded to a person’s lymph nodes, where they get stuck.

Tattoo inks contain a wide range of chemicals and heavy metals, including some that are potentially toxic. Because of concerns about this potential toxicity, last year, the Joint Research Centre, which provides advice to the European Commission, issued a report highlighting the need for funding into research on tattoo ink toxicity and how tattoo inks break down in the body.

Plenty of circumstantial evidence exists to show that tattoo pigments travel around the body, says Ines Schreiver, a researcher at the German Federal Institute for Risk Assessment in Berlin. “Physicians had seen that lymph tissue of tattooed people was colored,” she explains, but details about the pigments in the lymph nodes, which act as filters for the human body and are an important part of the immune system, are scarce.

With skin and lymph tissue samples from four deceased tattooed individuals, as well as two nontattooed individuals, in hand, Schreiver and her colleagues set out to investigate. Using matrix-assisted laser desorption ionization time-of-flight mass spectrometry (MALDI/TOFMS), the team found the same organic pigments, including pthalocyanines and azo compounds, in the skin and lymph samples from the tattooed individuals (Sci. Rep. 2017, DOI: 10.1038/s41598-017-11721-z). “This is hard proof that what you find in the lymph is from the tattoos,” Schreiver says.

Using inductively coupled plasma mass spectrometry (ICP-MS), the researchers detected higher levels of certain inorganic elements in both the skin and lymph nodes of the tattooed subjects compared with those without tattoos. Those elements included titanium, aluminum, chromium, nickel, and other metals. Some of these elements, which tattoo inks contain as preservatives or contaminants, are known to be toxic.

To investigate the size, structure, and immediate environment of the pigment particles, the team took their samples to the European Synchrotron Research Facility (ESRF), in Grenoble, France. Examining the tissue from their tattooed subjects with synchrotron X-ray fluorescence microscopy, Schreiver’s team spotted particles of TiO2, used in white ink, and the brominated pigment copper phthalocyanine green 36. The particles appear in both the skin and lymph node samples, though those in the skin samples were up to micrometers in diameter while the lymph tissue contained only smaller, nano-sized particles. “It is logical that the tinier the particles are, the easier they migrate,” Schreiver says.

The significance of the particle size difference isn’t clear because the number of individuals in this study is small, cautions Jørgen Serup, a dermatologist at Bispebjerg University Hospital in Copenhagen. “Deposits in lymph nodes are not a health concern” according to studies in mice, Serup says.

Still, Serup would like to know more. It would be significant “if pigment particles go further in the blood and body and cause clinical problems in particular cancers,” he says. Schreiver says she hopes to now investigate whether there are ties between the chemical identity of the particles and negative health effects, such as a granuloma or allergies.

Related stories: What's that stuff? Tattoo Ink What chemicals are in your tattoo? Chemistry Tattoos

Industrial Safety
VCI asks EU to delay TiO2cancer labeling decision
Art & Artifacts
Method maps reddish pigment in fossil
Consumer Safety
What chemicals are in your tattoo?
Share X
To send an e-mail to multiple recipients, separate e-mail addresses with a comma, semicolon, or both.
Title: Tattoo inks go more than skin deep
Author: Katharine Sanderson
Chemical & Engineering News will not share your email address with any other person or company.

Comments
Robin Cywar (September 27, 2017 2:01 PM)
It would be interesting to see what content patients who undergo laser removal have in their lymph nodes, since the procedure breaks up the cells containing the pigment and sends them into the body/blood stream.
Reply »

Fulvia Di Gregorio (October 9, 2017 12:06 PM)
You have made a very good point. They would need to investigate this further.
Reply »

Tim (September 28, 2017 12:02 PM)
Were there abnormallies in the way the tattooed cadavers died? IOW did the chemicals in the tattoo ink hasten their deaths?
Reply »

kristy keller (March 14, 2018 1:49 PM)
My son has heavy metals in his thymus and all aspects of the lymph nodes from excessive tattoos. we are having to do a heavy metal detox (which will probably be a periodic thing, as he is still tatted) and a lymph detox as well. its most likely going to be preventative maintenance at this point :)
Reply »