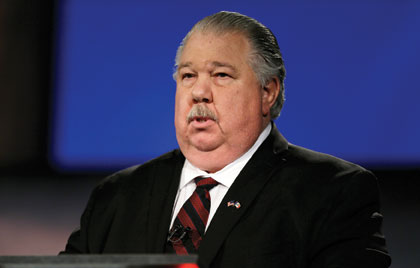 Agriculture businesses, including manufacturers of pesticides and fertilizers, are strongly supporting President Donald J. Trump’s pick to be the U.S. Department of Agriculture’s chief scientist.

Jay Vroom, president of CropLife America, which represents the pesticide industry, says nominee Sam Clovis Jr. “understands the importance of relying on sound science and data to make important decisions that will affect the ability of growers to provide food for the U.S. and the world.” Christopher L. Jahn, president of the Fertilizer Institute, a trade association, adds, “American agriculture will find a knowledgeable and strong advocate in Dr. Clovis.”

Clovis, a retired Air Force officer, former economics professor, and a Trump presidential campaign adviser on agricultural issues, has drawn sharp criticism since his nomination in July for lacking hard-science credentials and for his skepticism about the scientific consensus on human-caused climate change. If confirmed by the Senate, he would control nearly $3 billion a year in research grants and serve as the USDA’s top scientist.

Senate Democrats vehemently oppose the appointment of Clovis to be USDA’s undersecretary for research, education and economics. They plan to wage an all-out battle this fall when the Senate considers the nomination.

“This nominee seems to lack the necessary agricultural science and research qualifications that are required” for a top-level science position, says Sen. Debbie Stabenow of Michigan, the top Democrat on the Senate Agriculture Committee. “I also have many questions about his troubling views on climate change.”

Environmental and other left-leaning groups have also seized on Clovis’ weak credentials to attack his nomination. “Clovis’s appointment is unacceptable and would lower the high standards that America’s scientists, universities, farmers and consumers expect,” says Mike Lavender of the Union of Concerned Scientists.

Comments
Vivian Lesher (September 16, 2017 4:46 PM)
An Economics professor as a Chief Scientist?
What are his scientific credentials?
Sounds like dirty politics to me.
Reply »