Alkaline solution wipes out residues on the fruits’ surface but leaves some behind in their peels, study shows

[+]Enlarge
Credit: Shutterstock
Rinsing with tap water doesn’t remove pesticides from the surface of apples as well as washing with a baking soda solution. 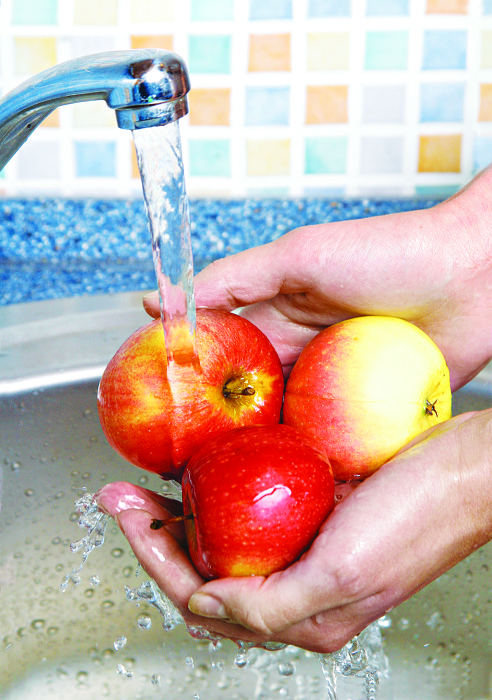 Credit: Shutterstock
Rinsing with tap water doesn’t remove pesticides from the surface of apples as well as washing with a baking soda solution.

Rinsing produce with tap water removes germs and also significantly reduces pesticide residues. But some pesticides persist on produce after getting doused under the faucet, raising health concerns about chronic, low-level exposure to the compounds. A new study finds that a baking soda (sodium bicarbonate) wash can completely remove residues of two pesticides from the surface of apples (J. Agric. Food Chem. 2017, DOI: 10.1021/acs.jafc.7b03118).

According to the U.S. Department of Agriculture, about 85% of the produce sampled in 2015 had pesticide residues, with apples sporting 16 different ones. In over 99% of the samples, residues were below tolerance limits—the maximum amount of pesticide that can legally remain in or on a particular food—set by the U.S. Environmental Protection Agency, indicating little acute health risk. “However, there isn’t enough information to say for sure whether long-term, low-level consumption of pesticides on produce is safe,” says Lili He, an analytical chemist at the University of Massachusetts, Amherst. Recent studies have linked chronic, low-level pesticide exposure to hyperactivity in children, diabetes, and low sperm counts.

“Washing produce is an easy way to reduce the risk of pesticide exposures,” He says. Because commercial processers wash their fruits and vegetables for two minutes after harvest with a bleach sanitizer to remove dirt and germs, He and her team wondered if the wash might also remove pesticide residues. The scientists compared the efficacy of the germicidal bleach to rinsing with tap water or a sodium bicarbonate solution, which is alkaline. “Most pesticides are not stable at an alkaline pH, which breaks down the compounds and helps to wash them away,” she explains.

The researchers purchased organic Gala apples and applied two common pesticides, the fungicide thiabendazole and the insecticide phosmet, at concentrations used by farmers. After the various washes, He employed surface-enhanced Raman scattering (SERS) to map pesticide residues on the surface of the apples and inside their skins.

Immersing the apples in a sodium bicarbonate solution for 15 minutes followed by a freshwater rinse removed all pesticide residues from the surface of the apples, whereas the tap water and bleach treatments removed some, but not all. Sodium bicarbonate degrades the pesticides, boosting the physical removal force of washing, He says.

The SERS analysis also uncovered some of the pesticides lurking inside the peel. Thiabendazole, designed to absorb into the fruit flesh, penetrated to a depth of 80 µm, four times farther than phosmet, which is designed to remain on the fruit surface. Using a mass spectrometer, the investigators determined that 20% of the applied thiabendazole and 4.4% of the applied phosmet had infiltrated the peel and remained after washing. “This is the first study to provide solid evidence that the farther pesticides penetrate into apples, the harder it is to wash the compounds away,” she contends.

“The study hit two classes of pesticides, a fungicide and an organophosphorus insecticide,” says Jason C. White, an analytical chemist at the Connecticut Agricultural Experiment Station, “but there are probably 50 pesticides labeled for use on apples, and they will be removed at different rates, so more testing is needed.”

Peeling the apples would help remove more of the pesticide residues, but “people would like to eat the peel because it has vitamins,” says Lia A. Stanciu, a materials engineer at Purdue University who makes sensors for detecting pesticides. The methods demonstrated in the study can now be used to look at other cleaning agents that might pull pesticide residues out of the peel. In addition, commercial processors could add sodium bicarbonate to their produce wash to reduce pesticide residues, she says.

Environment
Baking soda washes pesticides from apples
Analytical Chemistry
Lili He
Environment
Wildflowers Appear To Give Bees A Dose Of Pesticide
Share X
To send an e-mail to multiple recipients, separate e-mail addresses with a comma, semicolon, or both.
Title: Baking soda washes pesticides from apples
Author: Janet Pelley
Chemical & Engineering News will not share your email address with any other person or company.

guest (November 5, 2017 12:50 PM)
if bicarbonate is basic enough to degrade the residual pesticides then bleach, as used by the farmers, should be even better at it as bleach solutions are strongly basic. it would have been interesting to compare these treatments side by side.
Reply »

Gottfried Feistner (November 9, 2017 11:46 PM)
I was surprised to read that thiabendazole is "degraded" by a sodium bicarbonate solution. According to
https://pubchem.ncbi.nlm.nih.gov/compound/thiabendazole#section=LogP
thiabendazole is "stable in water and in acid and alkaline soln; stable under normal conditions to hydrolysis, light, and heat."
Reply »

bfearn (November 6, 2017 10:28 AM)
Many farmers have embraced poisons as an everyday part of producing food. I believe that this has harmed many farmers as well as their customers.

People like me are no longer their customers as we are concerned about the long-term effects caused by these poisons. Perhaps this is one of the reasons that apples have been less popular since 1998.
Reply »

Diane Martinson (November 7, 2017 3:05 PM)
I would like to know the "recipe" for the baking soda bath, how much water to how much baking soda. Seems to me if you use too little you won't get the best results so I'd like to know how much the study used to get their good results.
Reply »

Tess (November 8, 2017 4:58 PM)
From the main article - 10 mg/mL NaHCO3 washing solution, it took 12 and 15 min to
completely remove thiabendazole or phosmet surface residues, respectively, following a 24 h exposure to these pesticides, which were applied at a concentration of 125 ng/cm2.
Reply »

Bob PArsons (November 9, 2017 9:00 AM)
For those non-scientists who are familiar with the English system of measurement rather than the metric system, 10 mg/mL (milligrams per milliliter) is equivalent to 0.01 ounces (one-hundredth of an ounce in weight) of sodium bicarbonate dissolved in 1 liquid ounce (in volume) of water, or 1 weight ounce of bicarbonate in 100 liquid ounces of water.
Reply »

Bill (November 12, 2017 3:15 PM)
Or, you can just buy organically grown apples, and not have to worry about washing them. "Better living through chemicals" doesn't apply across the board, does it?
Reply »

Rene (February 18, 2018 8:55 AM)
I thought the study was done on organic Gala apples, and there was some pesticide on them that was removed by the baking soda solution.
Reply »

Jerry Baron (November 8, 2017 9:26 PM)
Please remember US EPA establishes the maximum residue level allowed on fruits and vegetables based on exposure in unwashed produce. There are multiple safety and uncertainty factors added into their risk assessment equations when determining this maximum residue level. The Research data (USDA Pesticide Data Program) indicated that 98% of tested food is under this maximum residue level. For those who have additional concerns about pesticide in food, it is good to know you can wash to reduce the exposure.
Reply »

Mary (November 10, 2017 10:35 AM)
Washing apples at home will usually not remove any further contaminants since most apples are wax coated thus sealing in any substance left on the skin at the time of coating; at this point peeling is the only option.
Reply »

Robert Buntrock (November 17, 2017 10:40 AM)
After scanning through the original article (J. Ag. Food Chem), I find several problems with this study. The studies were performed on treated apples within a day after application whereas fruit obtained commercially is typically treated days or even weeks before purchase. Degradation of the fungicides is acknowledged but the kinetics and identity of degradation products is not given nor is the effect of pH since washing with bicarbonate is shown to be better than water washing. Measurements of the fungicides don’t seem to be sufficiently quantitative and error bars are also not given even though LC/MS was used as follow-up to SERS. Actual amounts are important since both fungicides are relatively non-toxic and thiabendazole is also a well-studied pharmaceutical. True hazards need to be identified quantitatively.
Reply »

David M Butcher (April 10, 2018 4:02 PM)
Contrary to what Rene says, the folks who conducted the study applied two pesticides to the apples in known concentrations in order to better test the removal method.

Mr. Buntrock makes some good points, in that the efficacy of the baking soda wash would be better demonstrated and should be performed on commercial apples with normal market ready pesticide residues as the consumers are faced with. It would seem the longer exposure periods of the pesticide exposures would likely allow further intrusion into the fruit of the pesticide.

I too have wondered about any wax coatings, as mentioned by Mary, applied to some apples, likely trapping contaminants, and how best to clean them.

I find no solace in the notion that some pesticides used might be seen as less harmful, just because forms of these chemicals may be found in pharmaceuticals! On the contrary, as the FDA approves more and more medications, some conditionally, it should be noted the vast number of bad side effects listed as these new drugs are hawked on TV. Very, very serious, damaging side effects. Buyer beware!