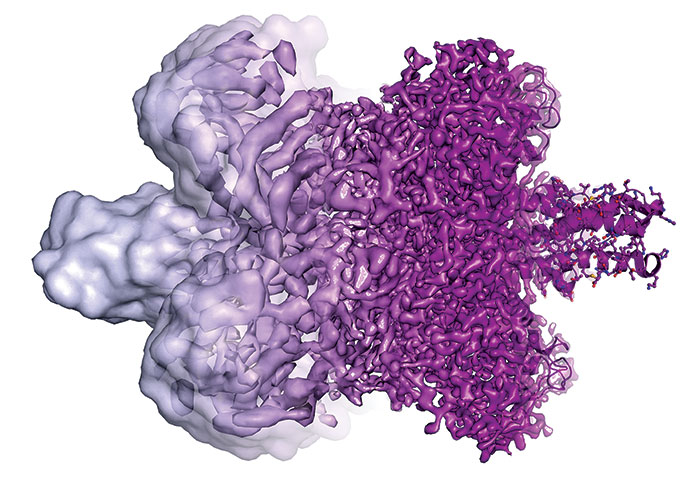 The 2017 Nobel Prize in Chemistry has been awarded to Jacques Dubochet of the University of Lausanne, Joachim Frank of Columbia University, and Richard Henderson of the MRC Laboratory of Molecular Biology in Cambridge, England. They earned the prize “for developing cryo-electron microscopy for the high-resolution structure determination of biomolecules in solution.” The scientists will equally share the $1.11 million award.

In cryo-electron microscopy (cryo-EM), a beam of electrons is sent through a biomolecular sample that has been frozen, typically with liquid ethane. The material deflects the electrons in a way that permits researchers to determine the structure of the biomolecule. Electron beams physically damage biomolecules, but freezing them, the “cryo” part of cryo-EM, protects them from electron damage and prevents them from getting dehydrated in the electron microscope’s vacuum chamber.

Structures obtained by cryo-EM and related techniques are of fundamental importance for understanding life chemistry, and they can help scientists develop drugs by elucidating the way bioactive agents interact with biomolecules.

“Proteins are in all living things—humans, plants, animals, bacteria,” says Allison A. Campbell, president of ACS. The prize “highlights the role that chemistry plays in every aspect of our lives. From the medicines we take to the plants we grow, understanding proteins—and the chemistry of those proteins—is critical.”

Cryo-EM can also visualize larger structures than NMR or crystallography can: Cryo-EM specialist Sarah Butcher of the University of Helsinki estimates that the technique can analyze 100-fold larger structures, including whole viruses and even frozen cells. That makes it “much, much more adaptable to lots of different types of biological questions than NMR or X-ray crystallography,” she says.

Henderson set the groundwork for cryo-EM in 1975, when he used electron microscopy to determine a three-dimensional model of bacteriorhodopsin by averaging multiple images obtained with weak electron beams. That study showed that electron microscopy could obtain images as detailed as those determined by crystallography, which was an inherently higher-resolution technique at that time. During the next decade, Frank, then at the New York State Department of Health Wadsworth Center, developed image-processing technology for converting conventional 2-D electron microscopy pictures into 3-D structures. Henderson also helped advance image-processing techniques.

In the early 1980s Dubochet devised methods for rapidly freezing biomolecular samples to protect them from electron damage and dehydration while maintaining their native molecular shapes. In 1990, Henderson was able to obtain the first atomic-resolution cryo-EM structure—of bacteriorhodopsin, which has a well-ordered structure that made high resolution easier to achieve than would have been the case with many other biomolecules.

In the past decade, advances in electron-detection technology, particularly the development of direct electron detectors, have greatly improved cryo-EM’s resolution capabilities. The advent of these detectors, now commercially available, and improvements in data-handling techniques “caused a huge revolution in the quality of cryo-EM data,” Butcher says. “Now that means we can recover all the information and go to atomic resolution, which is what crystallographers do. But we can do it without having to make crystals, and crystals are a pain.”

Credit: C&EN/ACS Productions
In this episode of Speaking of Chemistry, chock-full of cryo-electron microscopy images, C&EN reporter Matt Davenport breaks down the science behind the 2017 Nobel Prize in Chemistry.

Tanti T. Irianti (October 4, 2017 9:50 PM)
I congratulate you "Jacques Dubochet, Joachim Frank, and Richard Henderson" for this nobel prize 2017 in the field of developing the technique, which enables unprecedented views of important biomolecules.....

I can not imagine before how "the chemical structures obtained by cryo-EM "
We are scientist better and quickly to understand a life chemistry and to help for development drugs by elucidating the way they interact with biomolecules.

The dream comes true, that chemistry plays in every aspect of our lives.
Due to the best understanding proteins- and the chemistry of those protein- is critical for pharmacist and medicines to find some new drugs whether from the plants or other, in which selective drugs again any diseases especially for cancer.

with the best regard,
Tanti (Yogyakarta, Indonesia)
Reply »

Linda (Philadelphia, PA) (October 5, 2017 10:30 AM)
Congratulations! Thank you for all of your hard work and dedication to these advancements in analytical chemistry.

I wish the prize money could be more as it is well deserved by these individuals.
Reply »

Dr David Thomas (October 5, 2017 10:37 AM)
Wonderful work; well deserved prize. But I'm tempted to miss-quote Bosquet and say "c'est magnifique, mais ce n'est pas la chimie" Looking at the potted biographies none of the three has a chemistry background or qualifications, nor have any of then worked in a chemistry department. This is a group of physicists facilitating an important advance in structural biology. Does the Nobel committee actually understand what chemists do?
Reply »