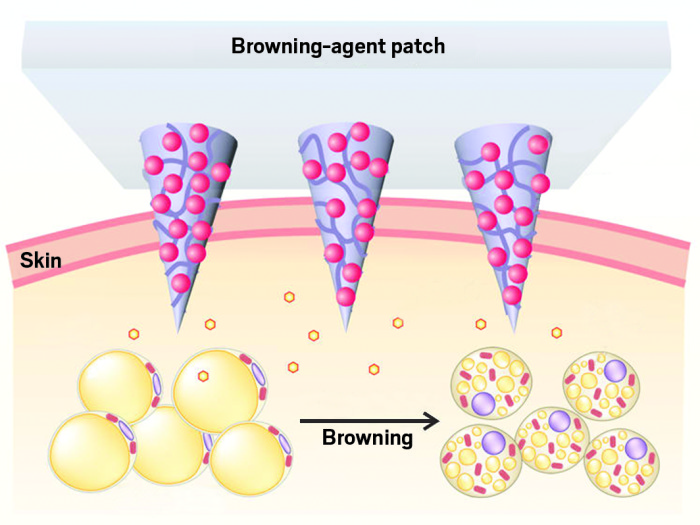 A new skin patch can burn fat at the site where it’s applied. Dozens of tiny microneedles on the patch slowly and painlessly deliver a drug that transforms energy-storing white fat into calorie-burning brown fat (ACS Nano 2017, DOI: 10.1021/acsnano.7b04348). Tested on obese mice, the patch reduced abdominal fat, increased metabolism, and brought down glucose levels. It could offer an effective and safe way to fight obesity and diabetes, says codeveloper Zhen Gu, a biomedical engineer at the University of North Carolina, Chapel Hill, and North Carolina State University.

Mammals have two types of fatty tissue: white and brown. White tissue stores energy; these white tissue deposits under the skin and deep in the abdomen are linked to obesity, heart disease, and diabetes. Brown fat, meanwhile, consumes energy and produces heat to keep us warm in cold weather, which helps to counter weight gain.

Adults have mostly white fat, which can turn into brown fat under sustained cold exposure, albeit very slowly. Scientists have recently discovered drugs that spur this browning process and could reduce white fat, but these drugs can have side effects ranging from severe discomfort to bone fracture, which makes them harmful to take systemically as pills or injections.

Last year, a research team from Harvard University and MIT packed one such drug, rosiglitazone—which is approved by the U.S. Food & Drug Administration for diabetes but not obesity treatment—into nanoparticles that accumulate in fatty tissue when injected intravenously (Proc. Nat. Acad. Sci. USA 2016, DOI: 10.1073/pnas.1603840113). A microneedle patch offers a pain-free, safe way to deliver the drug locally, where it is needed. “The use of microneedles was extremely creative and smart to mitigate drug toxicity,” says Omid Farokhzad of Harvard Medical School who was part of the earlier study.

Gu, along with Li Qiang of Columbia University and colleagues, made the patch by loading dextran nanoparticles with glucose oxidase enzyme and either rosiglitazone or another antiobesity drug, CL 316243, that is known to produce heat and break down fat in mice via a different mechanism. They coated the particles with alginate, and packed them into a 7- by 7-mm hydrogel patch covered with 121 conical microneedles.

When the microneedles puncture the top layer of the skin, some blood glucose seeps into the hydrogel and reacts with the glucose oxidase to create gluconic acid. The acid gradually degrades alginate, slowly releasing the drug over time. “Sustained release is better because if too much drug is released quickly, some can go into the circulation system,” Gu says.

To test the patches, the team attached either an empty patch or one containing either of the two drugs to the shaved lower abdomen of obese mice. The researchers changed the patch every three days for four weeks, then euthanized the animals and analyzed the animals’ fat tissue.

With the same food intake, the treated animals had 20% less subcutaneous fat in the area under the patch and lower fasting blood glucose levels. The treated tissue appeared more beige, and genetic analysis revealed a higher proportion of genes associated with brown fat.

“It is a novel and creative application of a generic drug and an existing patch technology to create a surprising result,” says John B. Buse, of the University of North Carolina Medical School. One of the systemic side effects of rosiglitazone is weight gain, which this local therapy does not cause. Translating the results from mice to humans could be “a giant leap,” Buse says. “Mice have much more brown fat than humans, and it is possible that the effect in humans will be less striking.”

Comments
Stan de Riel (October 11, 2017 9:31 PM)
Of course, if the treatment had instead resulted in a conversion of *brown* into *white* fat, it would have been considered a "faux patch"?
Reply »

Felicia (December 15, 2017 9:28 AM)
If the local treatment eliminates the systemic effects, would there be applications to those with anemia who are always cold?
Reply »