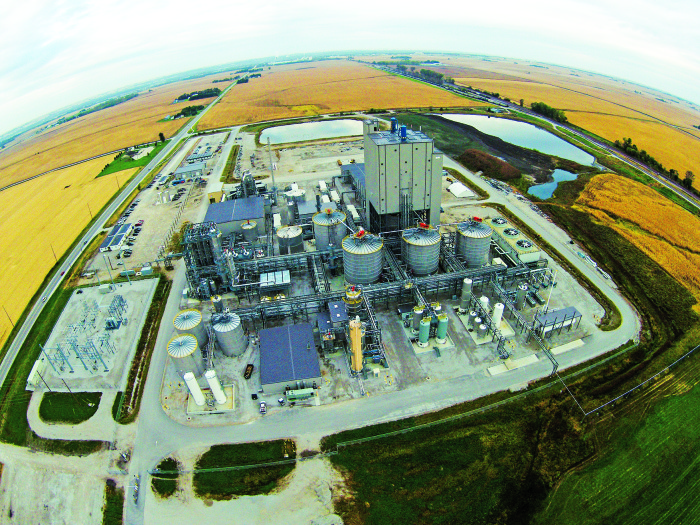 It’s one step forward and two steps back for the cellulosic ethanol business. As Clariant pushes ahead with plans to make ethanol from agricultural waste in Europe, two other chemical firms—DuPont and Beta Renewables—are pulling back from the technology.

On Oct. 31 Clariant announced plans to build a cellulosic ethanol plant in Romania based on its Sunliquid process. The Swiss specialty chemical company said the plant will be a flagship facility intended to demonstrate the technology’s competitiveness and support a licensing strategy.

That was pretty much DuPont’s plan when it decided to build a cellulosic ethanol facility in Nevada, Iowa. The plant, which opened in October 2015, was intended to be the first of a string of facilities that would use DuPont enzymes and yeast to turn corn cobs, stems, and leaves into ethanol.

But on Nov. 2, the same day that DowDuPont released its first quarterly earnings report as a combined company, DuPont disclosed plans to sell the business. “While we still believe in the future of cellulosic biofuels we have concluded it is in our long-term interest to find a strategic buyer for our technology, including the Nevada, Iowa, biorefinery,” DuPont said.

The company said it will continue to participate in the biofuels market with enzymes and engineered yeast, and that it will work with local, state, and federal partners to assure a smooth transition.

Late last year, another bankrupt company, Abengoa, sold its cellulosic ethanol plant in Hugoton, Kan., to a start-up firm, Synata Bio, that plans to convert it into a natural gas-based chemicals and fuels facility.

But it’s not all bad news for the industry. Clariant is investing in Europe. And the third big U.S. cellulosic ethanol maker, the Poet-DSM joint venture in Emmetsburg, Iowa, claims to have solved a major challenge in pretreating cellulosic feedstock so it can be attacked by enzymes and yeast.

“Where others have seen challenges, we have persevered,” says Poet-DSM board member Atul Thakrar. The firm says it anticipates increased production levels in 2018.

Comments
HARISH KUMAR (November 8, 2017 4:14 AM)
Its really interesting to note this development.
Reply »

Joseph Toomey (November 9, 2017 11:31 AM)
Under the terms of the EISA 2007 law, producers were to have produced 16.4 billion gallons of cellulosic ethanol by the end of 2017. As of September 2017, only 12 million gallons had been produced, a 99.93% target shortfall. http://tinyurl.com/ydefdylq Even with D3 RIN prices of $3.00 per gallon — Renewable Identification Numbers are EPA’s regulatory compliance mechanism that forces obligated party blenders to pay producers exorbitant amounts for threshold volumes of product — DuPont still can’t make any money after years of trial and error. http://tinyurl.com/y78my4ra So even though the largest chemical giant in the U.S. has poured staggering sums into cellulosic development, and even though the company qualifies for payments many times what the product is actually worth, http://tinyurl.com/h3ztuce it can’t make any money and wants out. Time to end this cellulosic ethanol farce.
Reply »

Adriano Fiaschi (November 10, 2017 8:04 AM)
Finally, after almost 2 decades loosing time with this false technology, many companies are reacting as espected. Leaving field.
Reply »