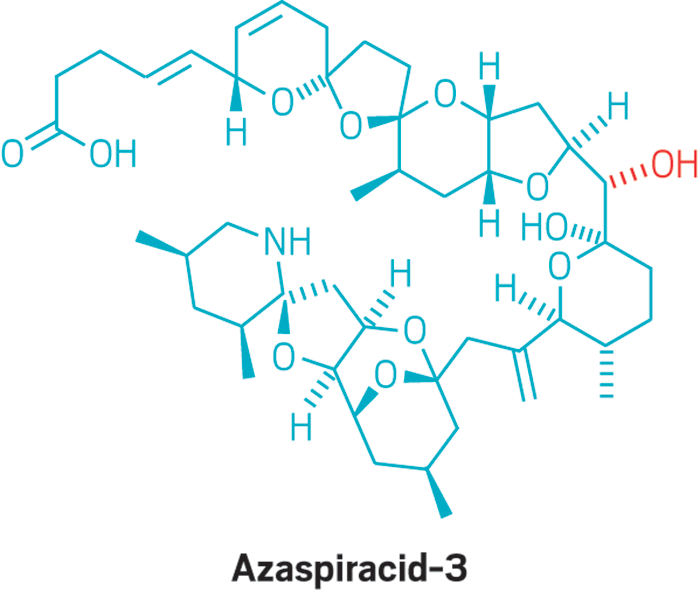 In the mid-1990s, scientists started to notice cases across Europe of people falling ill from a new kind of shellfish food poisoning. The culprit, researchers discovered, was a family of marine toxins, called azaspiracids, that were produced by plankton. These toxins have eluded chemists’ characterization efforts—owing in part to their amorphous nature, which prevents structural analysis via crystallography—though some have come very close, notably a 2004 synthesis reported by K. C. Nicolaou, then at Scripps Research Institute California.

A pair of papers from the laboratory of Craig J. Forsyth at Ohio State University now corrects the stereochemistry of a key position in azaspiracid-3 and details a total synthesis of the reassigned structure (Angew. Chem. Int. Ed. 2017, DOI: 10.1002/anie.201711006; Angew. Chem. Int. Ed. 2017, DOI: 10.1002/anie.201711008). Because plankton yield tiny quantities of the azaspiracids, a synthetic route to the molecules along with accurate structures can help scientists develop assays to detect the toxins in food.

Forsyth’s lab had been working on an azaspiracid synthesis when Nicolaou reported his in 2004. The 96-step total synthesis from Nicolaou, now at Rice University, reassigned the configuration of seven stereogenic centers and one double bond in the original structure reported in 1998.

Using the 2004 structure as a target, Forsyth’s group devised a new total synthesis. But when the chemists used liquid chromatography to compare their newly synthesized azaspiracid-3 with an authentic sample, they found that the compounds’ retention times didn’t match. They started to wonder if the 2004 structure was wrong.

After some head-scratching, Forsyth says, they suspected that the stereochemistry of an alcohol group sitting at the center of the molecule may have been misassigned. Forsyth’s team used a method involving L-(+)-tartaric acid that definitively set the stereochemistry at the C20 position according to the 2004 structure. But the Nicolaou synthesis installed the alcohol by reducing a ketone group, which could have yielded either stereochemistry, possibly leading to a misassignment.

To test their hypothesis, the researchers resynthesized the molecule, this time chemically inverting the stereochemistry at C20, and were “overjoyed” when the compound’s retention time matched that of the natural product. So while previous total syntheses by Nicolaou and David Evans’ group at Harvard University did succeed in making the correct natural product, they had misassigned one of the molecule’s 19 stereocenters. Finally figuring out azaspiracid’s structure was the culmination of two decades of research from a whole community, Forsyth says.

“This is an admirable chemical detective story and Craig Forsyth and his team deserve our congratulations for their meticulous work leading to the final structural revision of the azaspiracid structures,” Nicolaou says. “That they were able to decipher the last detail for the correct structure as they did, is a testament not only to their brilliant and scholarly work, but also to the current powerful state of the art of total synthesis and the modern high resolution analytical techniques that support it.”

Forsyth’s team has now published a convergent route to azaspiracid-3 with 29 steps in the longest linear sequence. The synthesis relies on a late-stage so-called Nozaki-Hiyama-Kishi coupling reaction to connect the two main molecular fragments. The chemists hope to further probe the molecule’s structure to understand how the various functional groups impact its biological activity.