Credit: Klaus Wagenbauer, Christian Sigl & Hendrik Dietz
A mixture of wedge-shaped “V bricks” and other DNA-based components self-assembled to create a monster dodecahedron (right), which is 450 nm wide and has a mass of about 1.2 billion daltons (as seen by transmission electron microscopy, left).

Molecular architects have developed a quartet of methods that could propel DNA nanotechnology into wider use. Together, the techniques offer a tool kit to mass-produce larger and more complex DNA structures than ever before, paving the way for applications from drug delivery systems to nanoelectronics. “I think people will now see that DNA nanotechnology is not just a small box of Tinkertoys,” says Hao Yan at Arizona State University, who was not involved in the research. “Now they will see some hope that you could use this for real applications.”

For the past decade, researchers have used a process called DNA origami to build stable and biocompatible nanostructures. A long “scaffold” of single-stranded DNA is folded into a predetermined shape by hundreds of shorter “staple” strands, which bind to specific positions on the scaffold. The sequence of bases in the strands acts as a blueprint that maps out the DNA’s self-assembly into three-dimensional shapes. But longer scaffold strands—containing roughly 10,000 nucleotides or more—have been difficult to manufacture and manipulate, limiting the size of origami structures to about 100 nm. Three teams have now developed DNA building blocks and assembly methods that all enable bigger structures.

Hendrik Dietz of the Technical University of Munich used double-stranded DNA helices to build wedge-shaped components called V bricks that have docking sites on the sides and interlock with neighboring bricks. These self-assembled into 350-nm-wide rings and micrometer-long tubes. Spurred on by this success, Dietz’s team added more components: triangular bricks with three docking sites and rectangular connector bricks. The resulting nanoscale K’nex kit generated a range of 3-D shapes, including a dodecahedron with a mass of 1.2 billion daltons that Dietz reckons is the heftiest DNA structure ever made (Nature 2017, DOI: 10.1038/nature24651).

Structures like this dodecahedron could one day be used to encapsulate therapeutic drugs, Dietz says. “I really believe the future of the field lies in therapeutics,” he adds.

A second type of building block developed by other researchers can produce even more complicated shapes. Peng Yin of Harvard Medical School and colleagues used short strands of DNA with four unique binding domains that could snap together with other strands like Legos. It’s not a new idea, but Yin and his team used bricks with longer binding sites that helped complementary single strands of DNA couple together more quickly and also increased the number of unique bricks at their disposal. They found that tens of thousands of different bricks could self-assemble into structures up to a mass of one billion daltons (Nature 2017, DOI: 10.1038/nature24648).If the Harvard researchers used all the binding sites on all the bricks, a giant cuboid formed. To create a diversity of shapes, they developed a software tool called Nanobricks that allowed them to delete specific bricks from the mixture to leave cavities in the structure, like sculptors carving a solid block of marble. Using this technique, the team fashioned shapes, including a teddy bear and the word “love.” 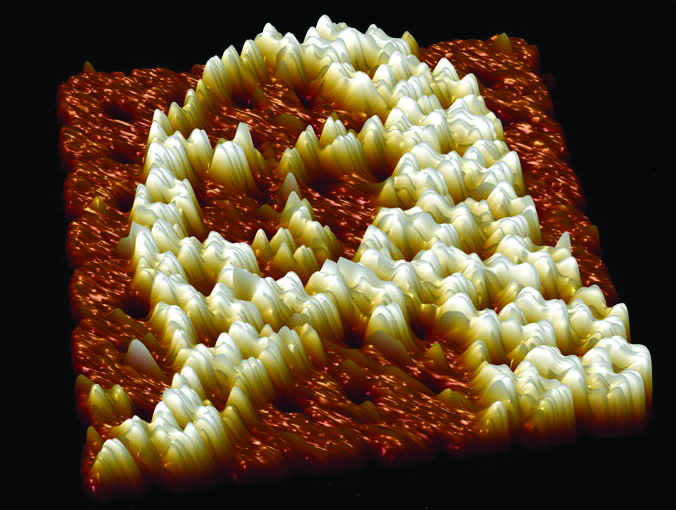 The third construction method, called fractal assembly, began with flat tiles of DNA as its basic building block. Each tile comprised a scaffold strand and 136 unique staples, and the edges of the tiles carried DNA sequences that interlocked with their neighbors. Ultimately, tiles came together to form an 8 x 8 panel about 650 nm wide (Nature 2017, DOI: 10.1038/nature24655). “With fractal assembly, it is now conceivable to create much more sophisticated artificial molecular machines with sizes similar to that of a bacterium,” says Lulu Qian of California Institute of Technology, who was part of the team behind the method.

Qian and the rest of the team could decorate each staple with an additional chunk of DNA jutting out from the tile. Once the tiles locked together, these panels could display nano-art images, which became visible when scanned with an atomic force microscope. The team developed software called FracTile Compiler to calculate which staples to decorate in order to create the “Mona Lisa” and other pictures. Such panels could eventually be used as a breadboard for nanoelectronic components, Yan says.

Another major bottleneck for DNA origami has been that scientists typically produce staples via expensive and time-consuming chemical synthesis, so these DNA architects tend to work with mere micrograms of material. Yet biomedical applications, such as drug encapsulation and delivery, may require many grams for testing in animals. “There’s no way you can pull that off unless you can make a lot of these things,” Dietz says.

To scale up production, Dietz’s team used viruses called bacteriophages to make single strands of DNA containing both a scaffold and staples, rather like a model kit that crams all the components of a miniature airplane on one plastic sheet. Crucially, the DNA also comes with built-in scissors called DNAzymes: When activated by zinc ions, the scissors could snip out the staples, creating a mixture of scaffold and staples ready for self-assembly.

The team amplified the viral DNA strands inside Escherichia coli in a 2 L fermentation vessel, eventually producing 163 mg of a 70-nm-long nanorod that had self-assembled from a scaffold and staples. If this process were repeated in an 800 L tank at a contract biotech facility, the researchers estimate, the DNA origami would cost approximately 18 cents per milligram, at least 1,000 times as cheap as conventional methods (Nature 2017, DOI: 10.1038/nature24650).

In principle, all the new DNA bricks and tiles could be manufactured this way, Dietz says. “With mass production in place and the ability to make these integrated structures, I hope progress will be faster,” he says.

Share X
To send an e-mail to multiple recipients, separate e-mail addresses with a comma, semicolon, or both.
Title: DNA origami hits the big time
Author: Mark Peplow
Chemical & Engineering News will not share your email address with any other person or company.