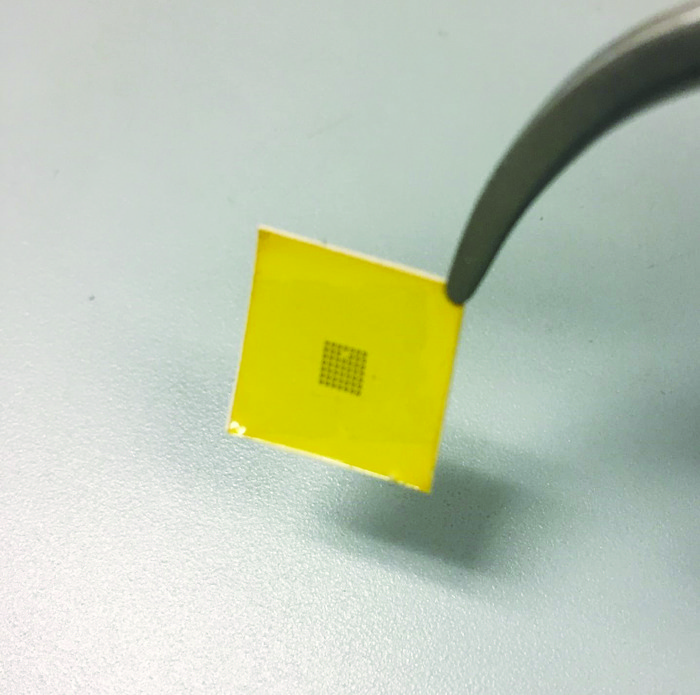 Credit: Deji Akinwande
Graphene transistors built on this sheet of specially treated paper perform as well as those built on plastic. The paper is 10 mm by 10 mm.

Electronics makers seem determined to connect more and more objects to the internet. But if they’re going to cover urban infrastructure, the environment, and even our bodies with electronic sensors, they also need to think about the expense and environmental impacts of these devices, says Deji Akinwande, an electrical engineer at the University of Texas, Austin.

To address this, Akinwande wanted to make a key component for flexible electronics—radiofrequency transistors needed for telecommunications—on paper. Paper is inexpensive and biodegradable. And thanks to the publishing industry, the infrastructure for printing on paper on large scales, and then recycling it, is well established.

At the International Electron Devices Meeting in San Francisco on Monday, Akinwande’s team reported both graphene and molybdenum disulfide transistors made on specially coated paper that boasted performance levels that match those of devices built on plastic.

Paper is a challenging material on which to make electronics: It readily absorbs solvents and other liquids; it warps and catches fire at temperatures usually used to manufacture transistors; and its surface is rough, making it difficult to print the fine features needed for transistors. Akinwande’s team sought a coating they could apply to paper to address these problems. They picked polyimide, which is already used as a substrate for printed electronics.

The Texas group worked out the right concentration of polyimide precursor to apply to paper to ensure a coating that was thick enough to protect the paper and smooth its surface, but not so thick that the paper becomes inflexible. Figuring out the right curing temperature was also a challenge. The polyimide precursors the Texas group chose usually cure at 250 ºC, but that temperature causes the paper to warp. The group tried different concentrations of precursors and lower temperatures to avoid that problem. They found that they needed to keep temperatures at or below 230 ºC to make sure the paper didn’t warp.

After the team coated the paper with polyimide, they made molybdenum disulfide and graphene radiofrequency transistors on the paper using the same methods they would use on pure polyimide. The researchers picked these two-dimensional materials due to their flexibility and electronic properties.

Akinwande says he was surprised how well the devices worked. “On paper or plastic you get the same results,” he says. Graphene on the coated paper has the same current density—a measure of how fast electrons move through a material—as graphene on polymer substrates. And the overall performance of both types of transistors was comparable to ones made on plastic.

One important measure for radiofrequency transistors is the frequency at which they can switch on and off. Bluetooth communications work at just over 2 gigahertz. The paper molybdenum disulfide transistors can reach 7 gigahertz, and paper graphene devices switch at 25 gigahertz. These electronics work well enough to, for example, send data from a printed sensor to a cellphone or the cloud.

In addition to the devices’ impressive performance, the paper itself remained flexible enough to fold up into origami.

Xiangfeng Duan, a nanochemist at the University of California, Los Angeles, is impressed. “This performance looks good for devices made on paper. It is a valuable step towards paper-based flexible, wearable electronics.”

Akinwande says the next step is to make paper devices with more capabilities—not just sending data, but processing it too. To that end, he is working on ways to stack molybdenum disulfide transistors, which show promise for digital logic circuits, and graphene transistors, which excel at telecommunications tasks, on top of each other.

Whether these paper devices are biodegradable will need more study, but Akinwande says they should be biocompatible and some forms of polyimide are biodegradable. He’s interested in using the paper electronics for medical devices—perhaps by combining them with paper-based lab-on-chip devices.

Electronic Materials
The first fully printed electronics roll off printers ready to use
Materials
Modern Circuits From An Ultrathin Material
Materials
A Solution-Based Method For Making Black Phosphorus
Share X
To send an e-mail to multiple recipients, separate e-mail addresses with a comma, semicolon, or both.
Title: High-performance, flexible electronics printed on paper
Author: Katherine Bourzac
Chemical & Engineering News will not share your email address with any other person or company.