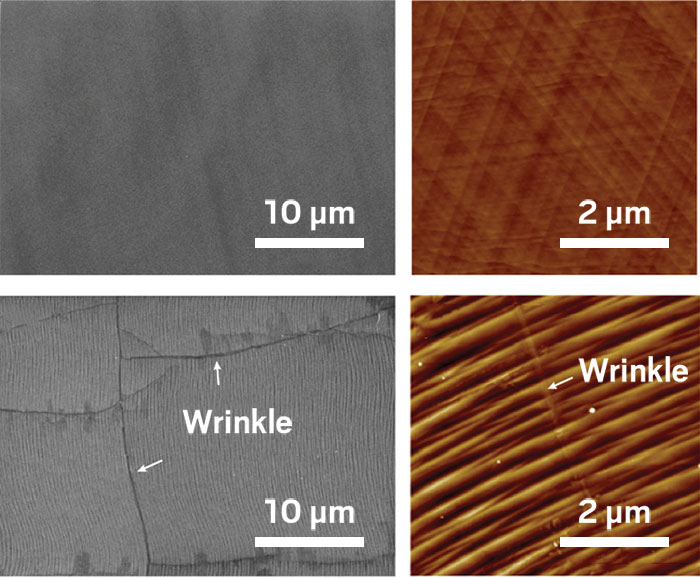 In theory, pristine graphene has superlative electrical, mechanical, and other properties that could be used to make speedy, energy-efficient electronics and optical devices. In practice, growing large amounts of single-crystal, supersmooth graphene suitable for high-performance electronic devices is difficult. Wrinkles form during graphene production that reduce the material’s thermal and electrical conductivity, impairing the performance of graphene electronics.

Existing methods use copper foil as a growth substrate to form a large, ultrathin sheet of graphene. However, Hailin Peng, a nanochemist at Peking University, and his colleagues hypothesized that a mismatch in material properties between between graphene and the copper growth substrate may be the cause of wrinkling. Graphene and Cu(100), the crystalline form of copper usually used to grow it, expand at different rates at a given temperature, leading to mechanical strain and causing wrinkling. So, Peng and his colleagues searched for copper substrates with a crystalline structure that’s a better match. They now report that graphene grown on a thin film of Cu(111) is perfectly smooth. What’s more, its electron mobility, a measure of how easily current moves through a material, is 11,000 cm2 per V-second. This ranks among the highest levels ever measured for graphene grown over large areas using practical methods. The team was able to grow Cu(111) films with the proper crystal structure using 10-cm sapphire wafers as a support. The copper-sapphire wafers can be reused after the graphene is removed.

Peng says this method is compatible with the technology used by the semiconductor industry. The next step is manufacturing. “We are trying to realize the mass production of this wrinkle-free, single-crystal graphene,” he says.

Ionic Liquids
Chemistry in Pictures: Papa’s got a brand new solvent
Materials
Fluorescent materials are the brightest ever made
Biomaterials
Fruit’s metallic blue caused by lipid nanostructures
Share X
To send an e-mail to multiple recipients, separate e-mail addresses with a comma, semicolon, or both.
Title: Ironing out graphene’s wrinkles
Author: Katherine Bourzac
Chemical & Engineering News will not share your email address with any other person or company.