Gilead and Sangamo deal shows that CRISPR still has competition 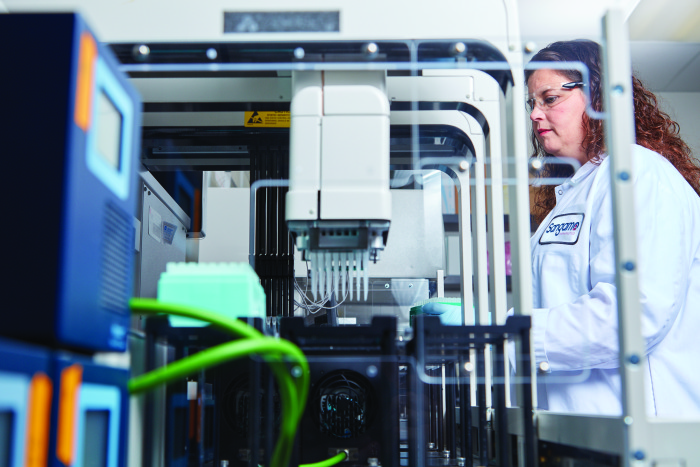 Credit: Sangamo Therapeutics
Sangamo says that making and testing its zinc finger nuclease (ZFN) gene-editing technology, once an arduous process, has been greatly accelerated thanks to this robot and a large library of ZFNs that can be quickly linked together and tested in cells.

Gilead Sciences is betting big on gene editing to bolster its cell-based immunotherapy division, but contrary to expectations, it will not be using CRISPR. Instead, Gilead will partner with Sangamo Therapeutics, a Richmond, Calif.-based company that pioneered an older gene-editing tool called the zinc finger nuclease (ZFN).

When CRISPR gene editing began its rise to prominence five years ago, many researchers assumed it would push out older competitors like ZFNs. CRISPR, scientists claimed, was faster, cheaper, and more precise.

That may be true in some cases, but Sangamo, which began working with ZFNs over 20 years ago, has refused to let ZFNs die. The firm’s scientists have improved and expanded the fingers’ gene editing abilities, and now major pharma and biotech companies are taking notice.

Now Gilead is paying Sangamo $150 million for access to its ZFNs. Sangamo could get $3 billion more if Gilead develops 10 or more new therapies. In January, Sangamo also signed a pact with Pfizer to develop a ZFN-based gene therapy for amyotrophic lateral sclerosis. And in November, Sangamo became the first company to test gene editing directly in a person.

CRISPR can be directed to most locations in the genome for DNA editing by a simple and easy-to-make molecule called a guide RNA. In contrast, ZFNs are large proteins that must be carefully crafted by a protein engineer to bind a particular DNA sequence for editing.

Over the years, however, Sangamo has accumulated a large library of ZFNs that can be linked together and quickly tested in cells to target practically any sequence in the genome. Gilead tells C&EN that “ZFNs are superior to CRISPRs and other gene-editing platforms based on such criteria as precision, efficiency, and specificity.”

CAR-T drugs like Yescarta must be manufactured individually for each patient. To start, scientists isolate T cells—a type of immune cell—from a person’s blood. Next, they genetically engineer these cells to help them target cancer cells, and then reinject them into the body so that they can tackle tumors. The procedure is pricey, and the manufacturing process takes weeks.

Gilead wants to cut the time that patients must wait by depersonalizing CAR-T therapy. Sangamo recently showed that it can use ZFNs to knock out genes in T cells that would otherwise elicit a dangerous immune rejection if injected into a different person. These allogeneic cells, or off-the-shelf, CAR-T cells, could be made in advance and given to patients as soon as they need them.

Of course, CRISPR can do this too, and several companies—including Cellectis, CRISPR Therapeutics, and Poseida Therapeutics—are developing CRISPR-edited allogeneic CAR-T cells.

In a panel hosted by the Biotechnology Industry Organization and the National Academy of Sciences on Feb. 22, Sangamo CEO Sandy Macrae said his company “can barely detect any off-target cutting” with ZFNs. Unwanted cuts and edits have been the topic of intense debate with CRISPR gene editing, and scientists will be watching for data comparing the accuracy of the two techniques. Macrae cautioned that long-term studies are still needed, and that gene editing should only be used for significant diseases where the benefit outweighs the risk.