by Deirdre Lockwood, special to C&EN 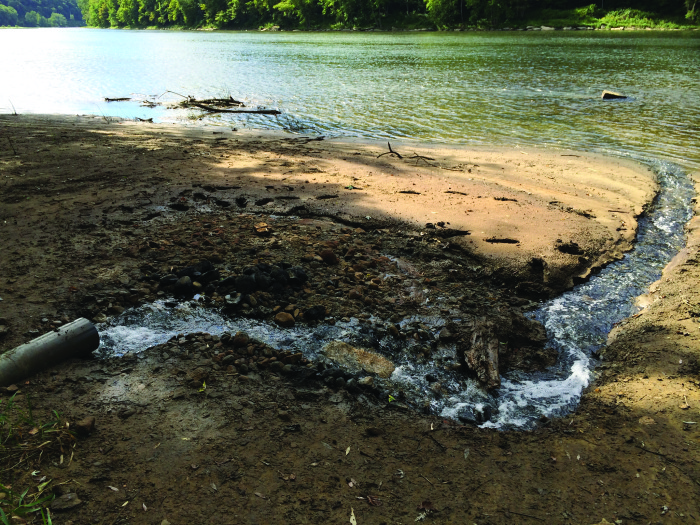 Credit: Avner Vengosh
Radium levels in sediments downstream of plants that treat oil and gas wastewater, such as this site on the Allegheny River in Franklin, Pa., are up to 650 times as great as in upstream sediments.

Despite a 2011 Pennsylvania guideline curbing the discharge of wastewater from the hydraulic fracturing, or fracking, industry to water treatment plants, high levels of radium are still settling in some of the state’s stream sediments, according to a new study. The results suggest that some treatment plants that process wastewater derived from conventional oil and gas production are releasing this carcinogenic radionuclide. In some sediment samples, the radium activity reached 25,000 becquerels/kg, about 14 times as great as the threshold at which some states require solid radioactive waste to be disposed of in a licensed facility (Environ. Sci. Technol. 2018, DOI: 10.1021/acs.est.7b04952).

During both fracking and conventional oil and gas production, saline water enriched in naturally occurring radionuclides is extracted from rock formations and flows to the surface as wastewater. In Texas, Oklahoma, and many other oil and gas producing regions, operators dispose of this wastewater by injecting it into deep wells. But in Pennsylvania, where the Marcellus Shale formation has supported a fracking boom, the underlying geology precludes deep well injection, says Duke University geochemist Avner Vengosh. 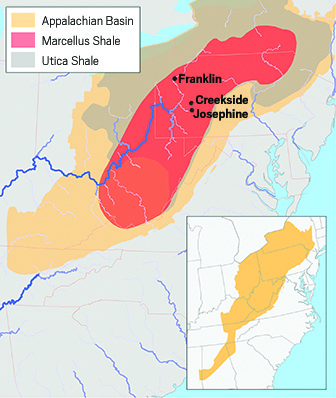 As a result, some of this wastewater in Pennsylvania has been shuttled to treatment plants to remove contaminants and then released into local streams. Because of public concerns about high levels of bromide in fracking wastewater, which can be transformed into harmful disinfection by-products such as trihalomethanes during wastewater treatment, the Pennsylvania Department of Environmental Protection asked fracking operators to stop sending wastewater to these facilities in 2011, and they have reportedly complied. But this request does not cover conventional oil and gas producers, who still send wastewater for treatment and release into some streams in the state.

Vengosh and his colleagues suspected that this source would also contaminate stream sediments with radium. So, from 2014 to 2017, they tested for it at three sites where streams receive this treated wastewater.

Near outflow pipes from the treatment plants, the researchers measured up to 650 times as much radium in the stream sediments as in sediments upstream. The overall levels of radioactivity in these sediments was similar to those the group previously found in sediments where fracking wastewater was being released, Vengosh says.

To determine the source of the radium, the researchers took advantage of the chemical difference between wastewater produced by fracking and that produced by conventional oil and gas production. The predominant radionuclide in wastewater from fracked, uranium-rich shale is 226Ra, whereas in sandstone and similar formations that are drilled conventionally, there are relatively equal amounts of 226Ra and 228Ra. The ratio of 228Ra/226Ra in the sediment samples indicates that the majority of the radium originates from wastewater from conventional oil and gas production, according to Vengosh.

The different half-lives of these isotopes and their daughter isotopes in the two types of wastewaters also help the researchers determine approximately how long the radionuclides have been in stream sediments. For example, 228Ra in conventionally drilled oil and gas formations eventually decays to 228Th. The 228Th/228Ra ratios in sediments suggest that the majority of the radium accumulated in the past three years, since fracking waste disposal in these streams is said to have ended.

Vengosh calls the levels of radium in the sediments “mind-blowing,” and found this especially surprising because wastewater treatment reduces radium levels by about 98%. The study suggests that even low concentrations of radioactivity in large volumes of treated water can generate a huge amount of radioactivity in sediments, he says.

Since the treatment and release of conventional oil and gas wastewater likely leads to this contamination, this practice should also be stopped, Vengosh says. Fracking wastewater is currently reused in fracking, or transported outside the state for deep well injection.

This contamination could spread beyond the stream sediments. Creatures living in streambeds can ingest the radium, and it can bioaccumulate, eventually showing up in fish. Wastewater from conventional oil and gas production, with its high salt content, is also sold as a road deicer in both Pennsylvania and New York.

Nicole Fahrenfeld, an environmental engineer at Rutgers University, calls the results interesting. She says the research raises questions about the fate of harmful constituents in these wastewaters—such as how far downstream elevated levels of radium persist, and whether sticking to sediments slows the spread.

These high levels of radium in sediments could come from infrequent pulses of wastewater with higher concentrations of radium, the authors note in the paper. Determining whether radium is slowly leaching into streams versus traveling in spurts will be important, Fahrenfeld notes. Engineers could use those insights to design more effective wastewater treatment technologies, she says.

Comments
Michael ferringer (February 11, 2018 1:02 PM)
I am a very avid fisherman in venango and mercer counties and occasionally warren. How long will it take to run these radium issues through to make my small local streams safe again to consume the trout I catch especially when camping?
Reply »