Delivering DNA on the tips of nanospears

by Katherine Bourzac, special to C&EN 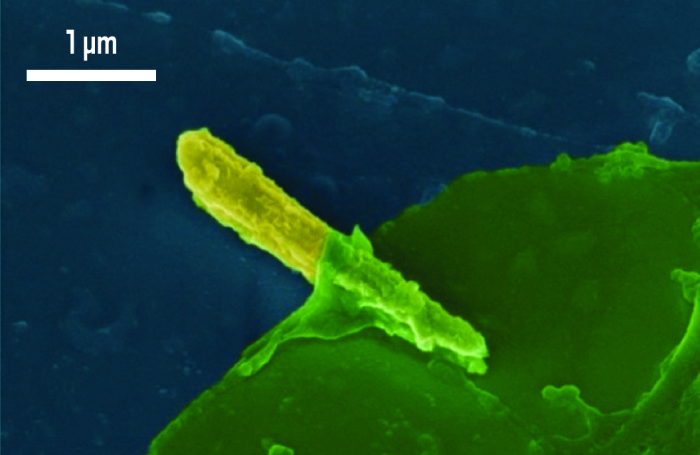 Aiming nanosized spears at cells could be an easy and inexpensive way to dispense gene therapy. In an early proof-of-concept study, nanospears—propelled by a magnetic field—successfully hit target cells in a dish and safely transferred their genetic cargo inside (ACS Nano 2018, DOI: 10.1021/acsnano.8b00763).

Gene therapies involve genetically engineering the body’s tissues by inserting DNA into cells. In a dish, such therapies can activate immune cells to fight cancer, or correct genetic disorders like sickle cell disease. However, these treatments are difficult to translate to the clinic and expensive to carry out. That’s in part because manipulating immune and stem cells remains the province of a handful of highly specialized labs, says Steven J. Jonas, a pediatric oncologist at the University of California, Los Angeles. The methods that have been approved by the U.S. Food & Drug Administration cost upwards of hundreds of thousands of dollars per treatment. Jonas is part of a collaboration between clinicians and nanoscientists who aim to make gene therapy more accessible by applying nanotechnology.

A 5-mm-long needle, guided by a magnet, pierces a cancer cell and delivers a gene for green fluorescent protein.
Credit: ACS Nano

Viruses have long been a tool of choice for gene therapy because of their knack for delivering foreign DNA into cells. But viruses can cause side effects, and making viral vectors is expensive, Jonas says. Another gene delivery method involves a kind of cellular shock therapy called electroporation. Applying a strong electric field causes pores to open up temporarily in the cell membrane, allowing DNA, enzymes, and other biomolecules to slip inside. Depending on the cell type, Jonas says, “viability suffers significantly.” In the best-case scenario, 60 to 70% of cells live through electroporation.

Jonas and UCLA nanoscientist Paul S. Weiss see promise in alternative DNA-delivery strategies, particularly the use of inorganic nanostructures. These constructs, Weiss says, can be easily manufactured in large numbers with very little variability, and—thanks to their small dimensions and biocompatibility—they can carry DNA into cells and then dissolve. The UCLA group was inspired by a project showing that arrays of nanoneedles could safely deliver nucleic acids into cells. But the cells then had to be carefully removed from the arrays (Nat. Mater. 2015, DOI: 10.1038/nmat4249). So the Los Angeles group decided to free these nanoneedles from their substrates and turn them into spears for delivering biomolecular cargo.

Credit: ACS Nano
Inorganic nanospears are grown on a silicon wafer, then coated with biomolecules before being scraped off its surface.

Xiaobin Xu, a researcher in Weiss’s lab, used lithography to make the nanospears—first by etching needlelike structures on a silicon wafer, then coating them with a layer of magnetic nickel, and following that with a coat of biocompatible gold. On top, the team layered organic molecules that can bind to biomolecules. The researchers magnetized the needles so that the tips would point towards a magnet, similar to how a compass needle swings to the north. After attaching biomolecules, they scraped the finished nanospears, about 5 µm long and 50 nm in diameter at their tips, from the silicon wafer.

As a demonstration, the researchers decorated the needles with a circular piece of DNA, called a plasmid, containing the gene for green fluorescent protein. The researchers tested the spears’ aim on a group of cancer cells growing on the bottom of a cell culture dish. They added the spears to the cell culture medium and held a magnet under the dish. A volley of nanospears pierced the cells and transferred their genetic cargo. About 80% of the cells were transfected, meaning they took up the plasmid and expressed the fluorescent protein. And 90% of them lived, offering a better viability rate than with electroporation. After two weeks, many of the nanospears had completely dissolved; others were encapsulated by the cells and in the process of being broken down, Jonas says.

Ennio Tasciotti, a nanomedical researcher at Houston Methodist who led the earlier research on nanoneedles for DNA delivery, says the UCLA group “nailed the transfection efficiency.” However, Tasciotti suspects it will be difficult to use the nanospear carriers in vivo. Moving the nanospears inside the body with a magnet “would require very great force,” he says.

In vitro genetic manipulation of patient cells, however, does have many potential medical uses, particularly in cancer immunotherapy and experimental therapies for hemoglobin disorders, such as sickle cell. However, demonstrating that this gene-delivery technique is clinically relevant will require more work, Jonas says. This method can only transfect small numbers of cells, whereas bone-marrow transplants for treating sickle cell disease, for example, would require genetically engineering billions of cells. He and Weiss say they are working on nanocarriers that have a higher throughput.

Nanomaterials
Electroplating method makes conductive nanostraws for injecting into and sampling from cells
Analytical Chemistry
Nanomotors swiftly silence genes
Biological Chemistry
Polymer Nanoparticles Deliver Genes To Brain Tumor Cells
Share X
To send an e-mail to multiple recipients, separate e-mail addresses with a comma, semicolon, or both.
Title: Delivering DNA on the tips of nanospears
Author: Katherine Bourzac, special to C&EN
Chemical & Engineering News will not share your email address with any other person or company.

Comments
Ellen M Martin (March 21, 2018 11:48 AM)
This is very cool technology that reminds me of the sexual darts that many species of hermaphroditic land snails use in mating to deliver the hormone that switches the target to female. Of course, the snails grown theirs from hydroxyapatite and they are much, much larger!
Reply »