For many medicinal chemists, the first-disclosures session is a mainstay event at the American Chemical Society national meeting. Company representatives reveal the medicinal fruits of their labor, showing early clinical data and drug candidate structures, the latter flashed onto the screen sometimes for only a few seconds. In the session held Wednesday in New Orleans by the Division of Medicinal Chemistry, presenters shared 11 such structures headed to or currently undergoing clinical trials in patients with cancer, autoimmune diseases, “superbug” bacterial infections, Alzheimer’s disease, and more. C&EN reporter Tien Nguyen followed along from the front row. 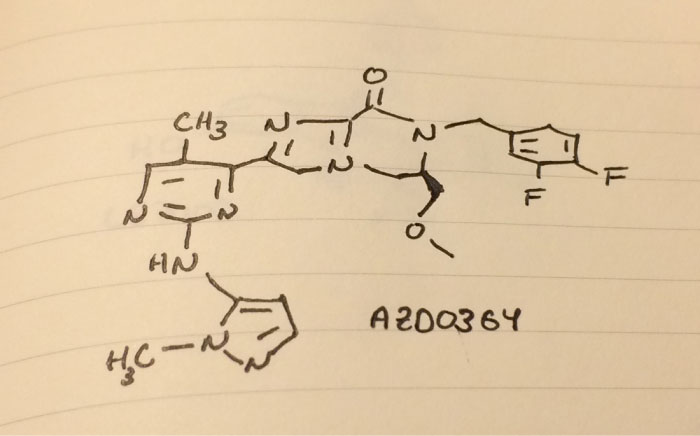 Target: Extracellular signal-regulated kinases (ERK1 and ERK2), which are critical enzymes in a pathway that turns normal cells into cancer cells

Reporter’s notes: Simpson shared the structure of AZD0364, which was synthesized in 9 steps and is poised for Investigational New Drug Application filing this year-a request for the Food & Drug Administration’s permission to commence human studies. Initial hits in the program proved promiscuous, showing poor kinase selectivity. The team found that installing another nitrogen atom into the core ring structure had a “profound” impact on their discovery program that let them advance rapidly. “That’s one of the good days in the lab,” Simpson said. 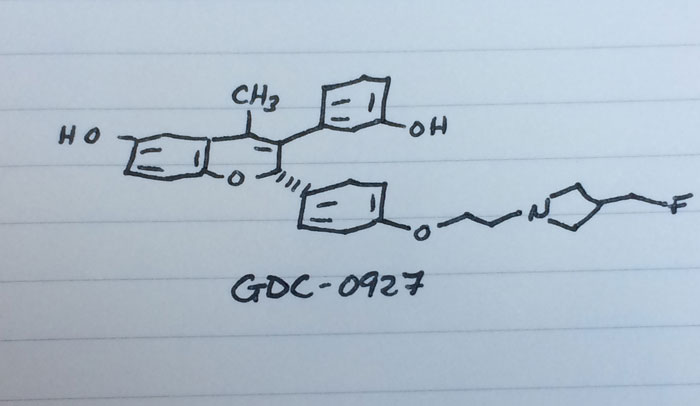 Target: Estrogen receptor alpha (ERα), a receptor expressed in more than 70% of breast cancers, making it a popular target for the disease

Reporter’s notes: In the first of two talks disclosing oral selective estrogen receptor degraders (SERDs), molecules that bind and subsequently break up estrogen receptors, Wang recounted Genentech’s “high risk, high reward” approach to developing the molecule. The team took a chance on developing GDC-0927, a molecule that had poor physicochemical properties. And complicating matters was its “non-trivial” synthesis, which required extensive optimization to raise the overall yield from about 1% to 4.5%. Despite the odds, the candidate has made it through Phase I clinical trials, she said. 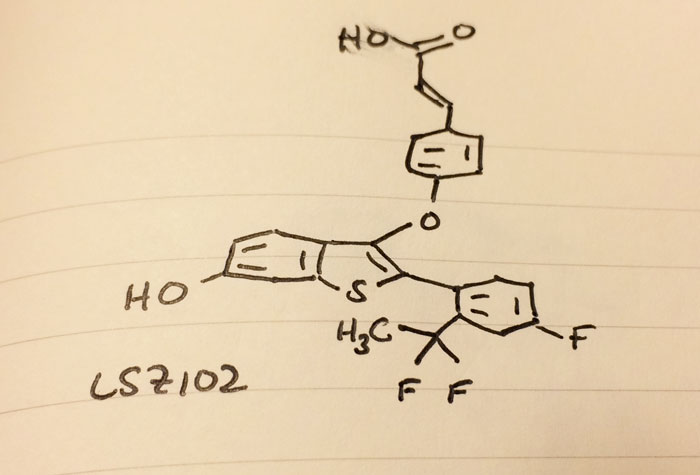 Reporter’s notes: Tria told the audience the story of another oral selective estrogen receptor degrader (SERD), LSZ102, now in Phase I clinical trials. The team made the compound in 7 steps (9 if you count the synthesis of the borate coupling partner) using a route Tria is “particularly proud of,” in which they strived for “boring” but easily scalable chemistry. During the talk, he alluded to a soon-to-be-published paper on their discovery and it appeared online the next day (J. Med. Chem. 2018, DOI: 10.1021/acs.jmedchem.7b01682). 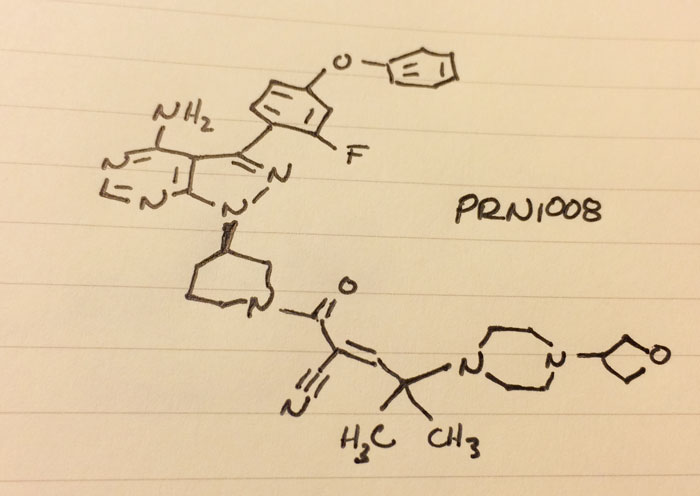 Target: Bruton’s tyrosine kinase (BTK), a protein that plays a critical role in the development of B-cells, a type of white blood cell involved in fighting off infections

Reporter’s notes: PRN1008 inhibits Bruton’s tyrosine kinase, which Owens said is an “extremely compelling” target for autoimmune diseases.The compound has made it through the Phase I safety evaluation with no outstanding issues, he said. The team is now testing the drug in Phase II trials for the treatment of pemphigus vulgaris, a rare autoimmune disease that causes painful skin blisters that affects 170,000 people worldwide. In a study of 18 patients with pemphigus vulgaris, four weeks of treatment with PRN1008 controlled the disease in 11 of the cases. Owens also presented the results of a canine pemphigus trial. Pictures showed dogs with large spots on their fur appearing much improved after 28 days, and possibly smiling, which elicited chuckles from the crowd. 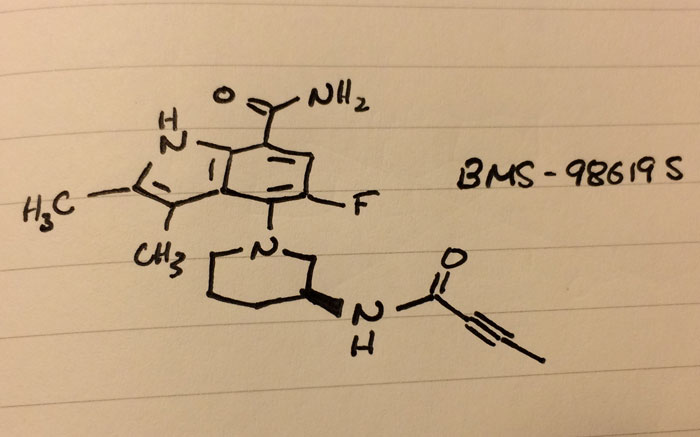 Reporter’s notes: Completing another set of back-to-back presentations on the same target, Watterson revealed another BTK inhibitor also in Phase II clinical trials. Chemists made BMS-986195 in seven steps, and the molecule showed high levels of BTK inactivation in mice. The team aimed to develop an effective compound that required low doses and that had low metabolic degradation. 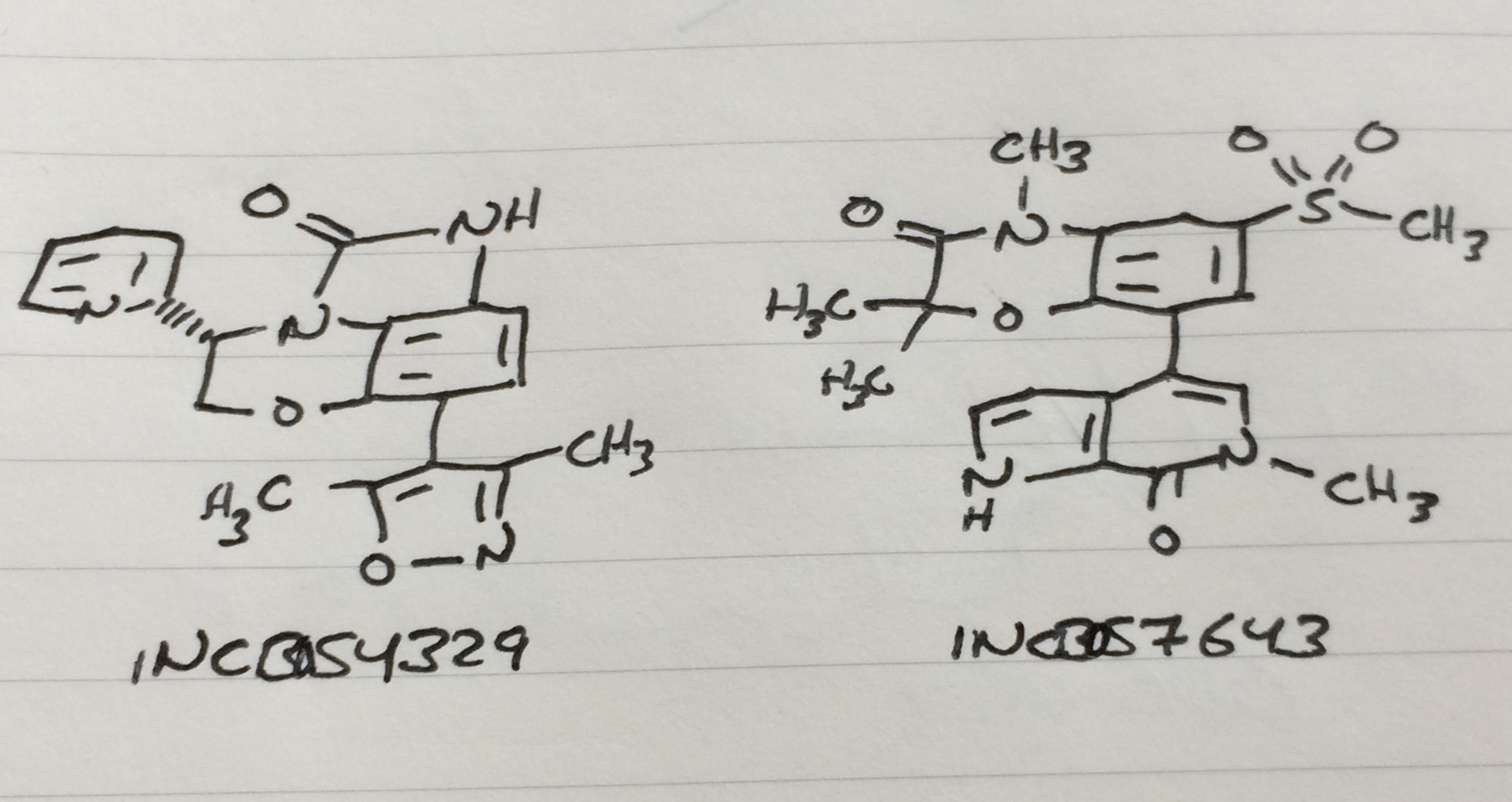 Reporter’s notes: After the lunch break, Combs kicked off the afternoon session with not one, but two disclosures. The Incyte researchers screened compounds against the BRD4 protein, one of four members of the BET family, identifying promising pharmacophores for development. INCB054329 showed potency in cells and mice but its short half-life required dosing twice a day. So the team looked for a back-up candidate. Inspired by another BET inhibitor, AbbVie’s Mivebresib, they discovered INCB057643, which had a longer half-life, allowing once-a-day dosage. Both were evaluated in Phase I trials and ultimately, INCB057643 will move forward. 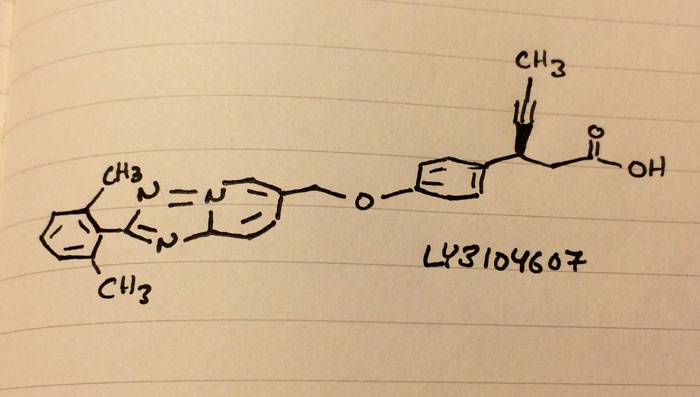 Reporter’s notes: Developed by Eli Lilly, LY3104607 joins the handful of GPR40 agonists recently offered by the company. The compound is not exactly a first disclosure as its structure was revealed in a January publication that describes its discovery and pharmacokinetic properties (J. Med. Chem. 2018, DOI: 10.1021/acs.jmedchem.7b01411). Hamdouchi, who worked on the molecule while at Eli Lilly, presented what the team learned about GPR40 and suggested that allosteric binding, binding which happens at a location other than the active site, may be a viable mode of action for GPR40 agonists. 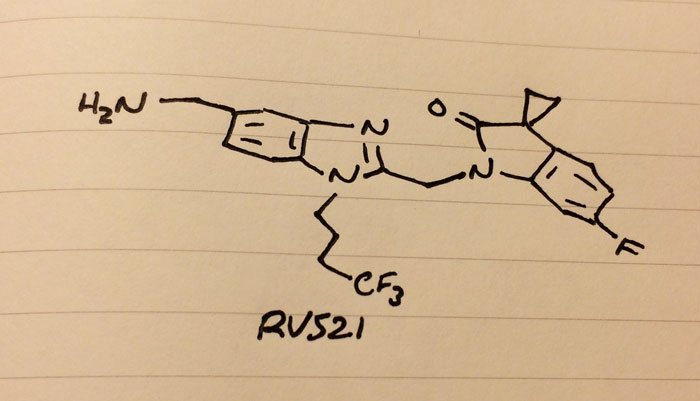 Reporter’s notes: RSV disease leads to 60,000 deaths a year in children under five and also occurs in older populations. “RSV picks on the weak,” Cockerill said. Work on the RSV fusion inhibitor RV521 began in 2011 with just two chemists, “believe it or not,” he said. Early funding from the Wellcome Trust, followed by a hefty £21 million infusion from investors, helped advance the campaign to Phase I trials in 2016. In fall 2017, the compound moved to Phase IIa development. 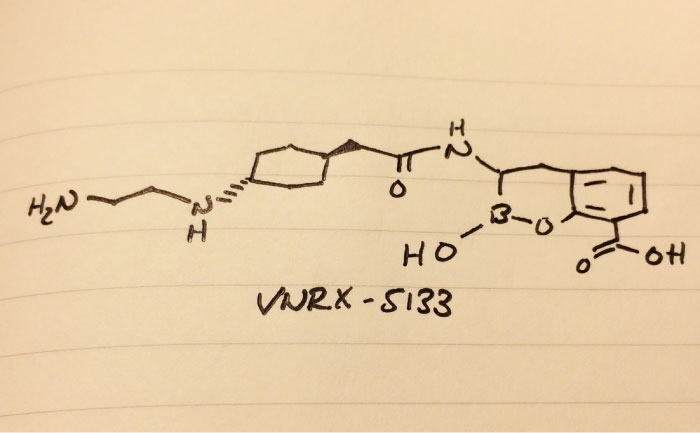 Reporter’s notes: Another story with humble beginnings, this time with Burns and two colleagues sitting in a Panera Bread, with an idea. They wanted to offer a new compound in the class of β-lactam antibiotics, drugs which are “well-liked” by doctors, Burns said, and make up 60% of all antibiotic prescriptions. However, bacteria have developed defenses against these compounds in the form of β-lactamases, or as Burns dubbed them, “PAC-men.” These enzymes can chew up 1000 β-lactams per second, he said. VNRX-5133 was active against both serine-β-lactamases and metallo-β-lactamases in enzyme assays. It is being developed in combination with the antibiotic cefepime. VNRX-5133 fends off the PAC-men’s attacks, allowing cefepime to combat infection. The compound has gone through Phase I clinical trials and will be skipping ahead to Phase III later this year. 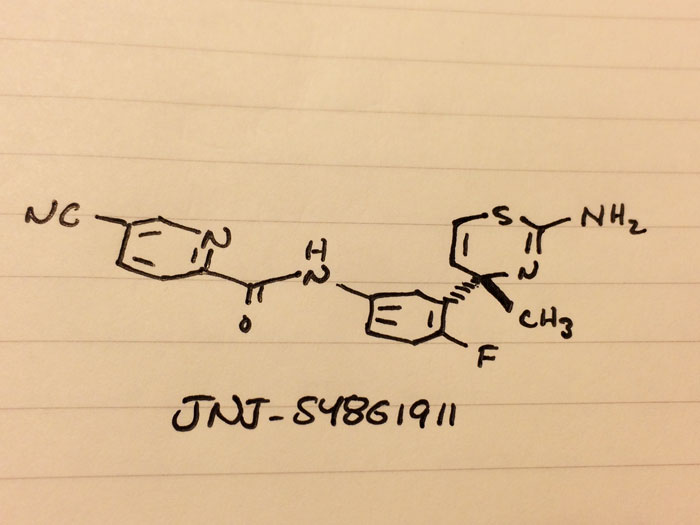 Reporter’s notes: Presented by Koriyama, who told the audience he was attending the ACS National Meeting for the first time, JNJ-5486911 joins dozens of clinical candidates from many companies in Phase II and III trials to treat Alzheimer’s disease. Researchers started with a hit that inhibited BACE1 with approximately 2,600 nM affinity and advanced the program until finally reaching a compound with roughly 1 nM affinity. The compound is being jointly developed by Shionogi & Co. and Janssen Pharmaceuticals.

Drug Discovery
Drug structures disclosed for the first time in Orlando
Drug Discovery
Drug structures displayed for the first time in Orlando
Oncology
Tempest Therapeutics launch shows IDO inhibitors are still hot
Share X
To send an e-mail to multiple recipients, separate e-mail addresses with a comma, semicolon, or both.
Title: Drug structures made public in New Orleans
Author: Tien Nguyen
Chemical & Engineering News will not share your email address with any other person or company.

Comments
David Teager (March 28, 2018 3:10 PM)
Thanks for the quick work! I was hoping you might have found a structure for MK-4250, a mystery drug in Phase I for HIV (presumably a follow-up Integrase Strand Inhibitor).
Reply »