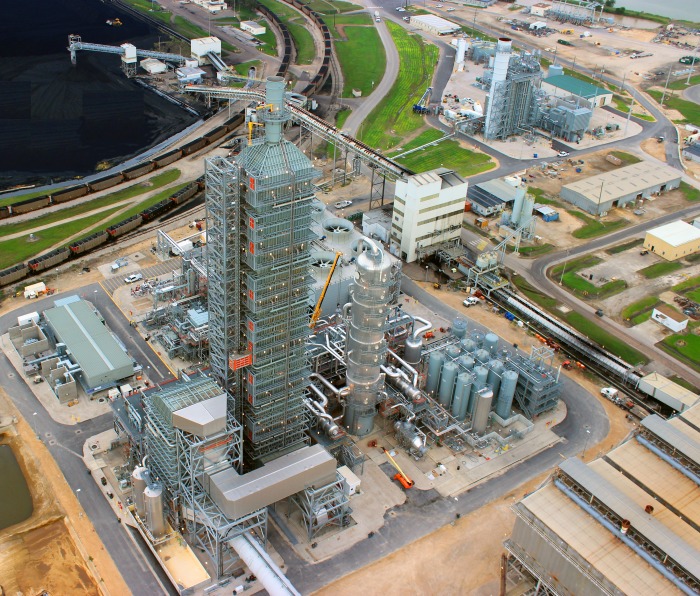 Credit: NRG Energy
The Petra Nova facility collects 14 million metric tons of CO2 per year from a coal-fired power plant near Houston. It is one of only two operating power plants with carbon capture and storage in the world. The other is in Canada.

A small provision in the recently enacted U.S. budget legislation is predicted to trigger an explosion of new spending for carbon capture and sequestration projects.

It creates a tax credit based on tonnage of carbon dioxide captured and sequestered underground or used in some way and kept out of the atmosphere. For those who claim the credit, this benefit will increase over time, topping out at $50 per metric ton in 2026.

Congress agreed to the provision with support from a unlikely combination of fossil fuel advocates and lawmakers concerned about climate change. The policy is intended to drive down costs for capture and sequestration of the greenhouse gas emitted from power plants, refineries and other industrial sources as well as CO2 stripped from ambient air. Its goal is to curb the threat of human-caused climate change.

Advocates for the credit hope the tax incentives will spur growth similar to that experienced by renewable energy developers through wind and solar tax incentives of the past decade.

A recent analysis by the International Energy Agency estimates that the U.S. tax credit could lead to capital investment in carbon capture and sequestration projects (CCS) of some $1 billion over the next six years. This potentially could add 10 to 30 million metric tons of new CO2 capture capacity and thereby increase total global carbon capture capacity by two-thirds.

IEA predicts that most of the captured CO2 will be used to enhance oil recovery. Companies already use this technology to inject pressurized CO2 into nearly depleted oil fields and force remaining petroleum to production wells. For sequestration purposes, enhanced oil recovery must take place in fields where there is no chance of pressurized CO2 returning to the surface.

IEA estimates the incentive for capturing CO2 will increase U.S. oil production by 50,000 to 100,000 barrels per day. Currently most of the 65 million tons of CO2 used to recover oil is mined from naturally occurring sources and does not reduce global warming.

Much of the focus on CCS application so far has been on CO2 emissions from coal-fired and natural gas electricity power plants. But carbon capture could also take place at industrial facilities producing steel, cement, and a range of fuels, from gasoline to bioethanol and hydrogen.

In fact, the biggest opportunities are likely to be in the capture of CO2 from hydrogen plants at refineries and from natural gas processing facilities, according to IEA’s analysis. These, IEA says, represent the lowest-cost sources of CO2 ﻿at large scale and they tend to be located near existing pipelines that transport CO2 to oilfields.

At a March 13 symposium in Washington, D.C., more than 100 attendees representing industries intent on developing, constructing, and selling technologies to capture CO2 ﻿were abuzz about the potential impact of the new tax breaks. Speakers at the national meeting of the Global CCS Institute predicted these tax incentives would mirror those offered to solar and wind energy and helped lead to the profound economic expansion experience by renewable energy developers.

However, renewable energy advocates are split on support for CCS. Groups including the Clean Air Task Force and the World Resources Institute strongly back CCS and applications to oil recovery.

“The world must move to de-carbonization,” notes Andrew Steer, CEO of the World Resources Institute. “There is really no alternative to carbon capture and sequestration. It will enable negative emissions.”

He says oil recovery is a temporary necessity to encourage CCS development. Eventually, CO2 will be sequestered in geologic repositories deep in the earth or used in industrial processes. The world must move to negative emissions of greenhouse gases, he says, by developing technologies to “pull CO2 out of the sky” in the form of direct air capture.

However, using the waste of fossil fuel combustion, CO2, to increase production a fossil fuel, oil, is a contradiction not lost on many in the environmental movement. Several environmental groups actively opposed the CCS tax provisions when Congress took up the bill.

Others, such as the Natural Resources Defense Council, are at best lukewarm. “NRDC has long supported carbon capture and storage as an important way to cut dangerous carbon pollution that’s driving global climate change,” says Ana Unruh Cohen, NRDC’s director of government affairs. “However, we don’t support fossil fuel subsidies, including subsidies for enhanced oil recovery, which would conflict with the need to reduce our dependence on those fuels.”

When it comes to stemming climate change, time is critical, says Brad Page, CEO of Global CCS Institute. Both Page and Steer stress that CO2 emission reductions called for in the 2015 Paris Agreement to combat climate change are unlikely without CCS. Plus, this technology is essential for mitigating the climate impact of some 200 new coal-fired power plants planned for in Asia, Page adds.

Pollution
Mercury makes it deep into marine trenches
Sustainability
US Senate passes sustainable chemistry legislation
Environment
P2 and ADM pair up for renewable products
Share X
To send an e-mail to multiple recipients, separate e-mail addresses with a comma, semicolon, or both.
Title: U.S. tax incentives expected to drive growth of CO2 capture, sequestration projects
Author: Jeff Johnson
Chemical & Engineering News will not share your email address with any other person or company.