Silk is smooth, strong, and biocompatible, making it a prized material for many applications. Scientists have tried all kinds of tricks to improve silk or imbue it with new properties: They have fed silkworms graphene or titanium dioxide to make stronger threads, fed them dyes to incorporate colors, and reprocessed silk to increase its elasticity. In the latest thread of the story, researchers have engineered silkworms to incorporate an extra amino acid, 4-azido-L-phenylalanine, into their silk. This amino acid serves as a ready target for functionalization reactions that could produce silks with a range of novel properties (ACS Synth. Biol. 2018. DOI: 10.1021/acssynbio.7b00437).

Silk is mostly made of the silkworm protein fibroin. “Silk fibroin is mechanically tough and biocompatible,” says Hidetoshi Teramoto of the National Agriculture & Food Research Organization. His team’s goal is to develop methods to alter fibroin for biomedical applications—for instance, modifying silk with proteins that promote cartilage growth so it can act as a nurturing scaffold for regrowing damaged tissue. Adding unnatural amino acids, such as azidophenylalanine, into silk fibroin could broaden the chemical possibilities for modifying the protein. But “at the beginning of this project, the effects of unnatural amino acid incorporation on silkworms were quite uncertain,” Teramoto says. “Some people said worms might not be able to survive.”

Nevertheless, Teramoto and his team pressed on, seeing if they could convince silkworms to spin azidophenylalanine into silk. The azido groups in this amino acid are ripe targets for simple and quick click chemistry reactions. First, the researchers had to get the silkworm’s protein-making machinery to pick up azidophenylalanine in addition to the usual phenylalanine and incorporate it into fibroin. They generated a pool of less selective variants of tRNA synthetase, the enzyme that attaches phenylalanine to transfer RNA for transport to the ribosome. Co-author Kensaku Sakamoto of RIKEN Center for Life Science Technologies says they then used a bacterial screening system to rapidly identify cells that incorporated azidophenylalanine into their proteins. This process identified four variants of the synthetase that looked promising.

Next, the team created four transgenic silkworm strains, putting the variant synthetase genes into the worms so that only the silk glands would produce the enzyme, avoiding any toxicity that could come from incorporating azidophenylalanine into proteins in other parts of the body. Then they let the silkworms get to work spinning their cocoons. The team analyzed the resulting silk, finding that in two strains, over 6% of the phenylalanine had been replaced by azidophenylalanine. Then, the researchers demonstrated that the azidophenylalanine in the silk could be functionalized by conjugating the silk to fluorescent molecules using click chemistry. The cocoons glowed.

“This is the first time that a non-canonical amino acid has been engineered into a silkworm,” says Dieter Söll of Yale University. “There are many examples where people want to change the silk fiber. I think this a great step forward for the synthetic biology of silk.” 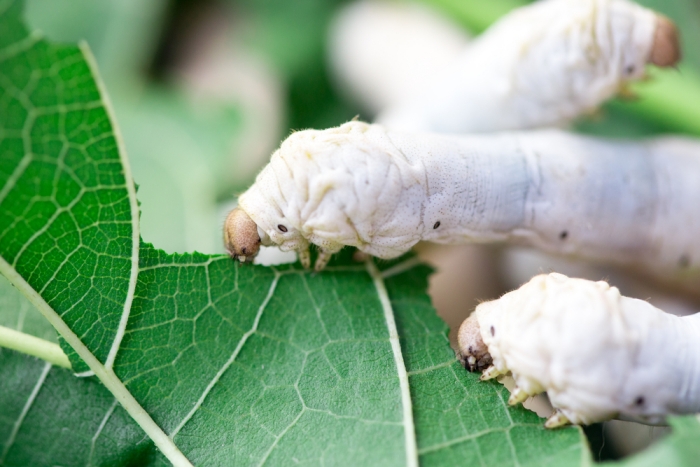 Share X
To send an e-mail to multiple recipients, separate e-mail addresses with a comma, semicolon, or both.
Title: Engineered silkworms spin unusual amino acids into silk
Author: Erika Gebel Berg
Chemical & Engineering News will not share your email address with any other person or company.