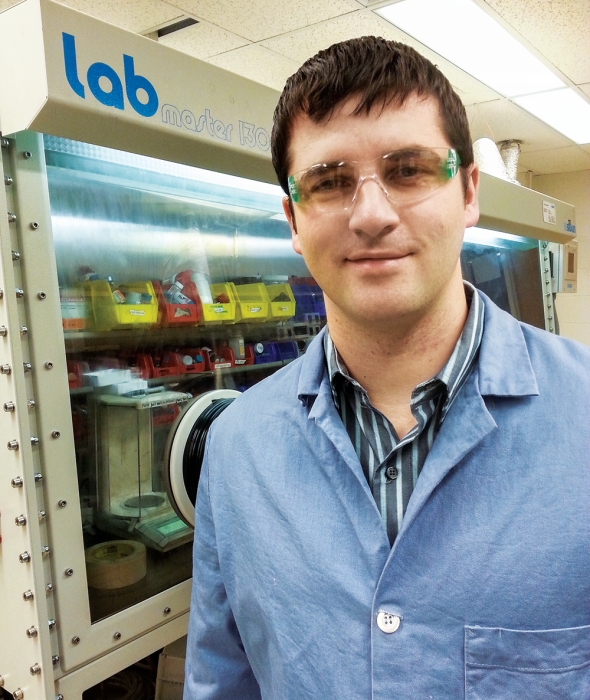 P212121 and Quartzy. Two lab services companies with strange names that seem downright nerdy once they are explained: The former is a term for the most common space group in macromolecular crystallography; the latter is the highest-scoring opening word in Scrabble.

“It’s kind of inside baseball,” says Sean Seaver, founder of P212121, of his company’s name, laughing as he describes the small lab chemical distribution firm’s business model. Like Adam Regelmann, his counterpart at Quartzy, Seaver speaks with an enthusiasm that may be unique to an upstart entrepreneur.

As Seaver describes it, his company purchases chemicals directly from manufacturers at a small discount and sells them through its website for the same price that distributors such as Sigma-Aldrich, Fisher Scientific, and VWR International pay before implementing their sizable markups.

It started in 2010, at about the same time as Quartzy, an online lab management service. The Quartzy website compiles order requests, documents standards and procedures, and schedules instrument time. The firm, which offers its Web service free of charge, hosts catalogs from vendors who pay to be on the system.

Seaver laughs when asked whether the two companies compete. “Adam and I joke about this,” he says, referring to Regelmann. “We are kind of different verticals.”

The primary difference between the companies is that Quartzy users end up purchasing from vendors listed on its website, whereas P212121 users buy chemicals and lab supplies directly from P212121. Seaver likens P212121 to Amazon, in that orders are placed on the site and shipped from the manufacturer.

Seaver says the lack of transparency in traditional pricing is a huge problem in managing lab costs, since prices are generally determined via an arcane round of markups and discounts by distributors.

P212121, in fact, was born of a cost crunch Seaver encountered when he was a chemistry graduate student at the University of Toledo. “I had two years left for a Ph.D., and our lab had $25,000 left to spend,” he recalls. On the basis of prices available through the university’s contracts with distributors, ends were never going to meet.

Seaver began researching prices charged by manufacturers. He compiled a spreadsheet listing 400 products from 80 small companies and found savings of up to 90% compared with what distributors charge. Other students in his lab asked to see the spreadsheet. Then professors in the lab wanted a look, he says. Then professors from other labs came knocking.

“So I ended up building a website,” he says. He also started the company, which is now located in Ann Arbor, Mich., and employs about a dozen people plus part-time consultants. The staff develops software for the website, liaisons with small chemical makers, and promotes the company by visiting labs and attending conferences. Currently, P212121 has relationships with about 100 suppliers and is used by researchers in more than 1,000 labs, according to Seaver.

Meanwhile, Quartzy has tripled its base to about 100,000 users in 12,000 labs over the past year, according to Regelmann. He tells a story similar to Seaver’s. Regelmann, a physician doing a residency at Washington University in St. Louis, was determined to stop the costly mismanagement he witnessed in academic labs by developing an online lab management platform, working with his partner Jayant Kulkarni. Others wanted to use it.

Regelmann says Quartzy is growing in biotech and pharmaceutical research. “A lot of scientists are approaching the software-as-a-service business model,” he says. “People are looking for software online.”

And they are often finding it in serendipitous fashion. Kevin Montgomery, the manager of 13 laboratories run by Case Western Reserve University, describes how he discovered P212121. “It was by a stroke of luck,” he says. “We started a few years ago using something called Quartzy.”

Montgomery noticed P212121 in Quartzy’s price quoting. “I took it upon myself to contact Sean, and we did a lot of ordering.” Direct contact with the principals at the two firms is not uncommon, even as their user base grows. Montgomery and others attest to quick responses to service inquiries, often from Seaver and Regelmann.

Montgomery says purchasing chemicals through P212121 can result in savings of as much as 50% when compared with the rate paid to large distributors through university contracts. Those traditional contracts do offer a better deal in some cases, he acknowledges.

As to whether the big distributors are concerned about the competition, Montgomery is not sure. “Sean’s group is very underground at the moment.”

But word of these websites is circulating in the research community. “They have picked up a lot of momentum,” Montgomery says, not only with researchers, but with the suppliers the websites count on for revenue. “I’ve made an effort to tout them to different companies.”

Informatics
It’s back: Chemical e-commerce tries for an act 2
Business
Why buy scientific equipment when you can rent?
People
Job Ads Aren’t What They Used To Be
Share X
To send an e-mail to multiple recipients, separate e-mail addresses with a comma, semicolon, or both.
Title: Lab Dwellers’ Helpers
Author: Rick Mullin
Chemical & Engineering News will not share your email address with any other person or company.