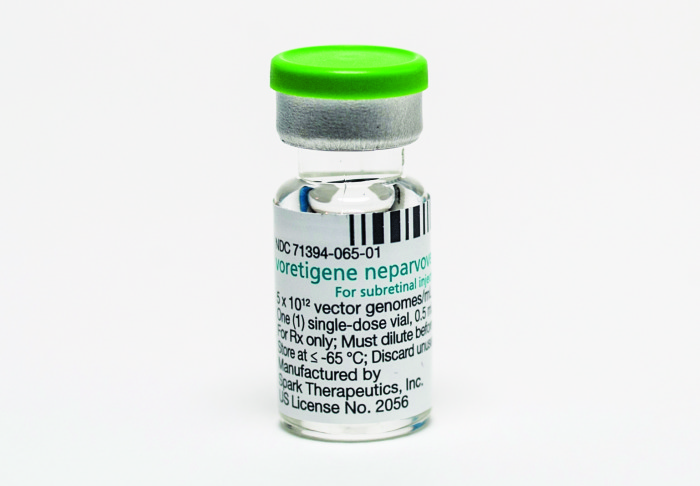 The therapy, called Luxturna, treats a form of inherited blindness, and was developed by Philadelphia-based Spark Therapeutics. Luxturna got an earlier-than-expected thumbs up from the U.S. Food & Drug Administration yesterday.

“I believe gene therapy will become a mainstay in treating, and maybe curing, many of our most devastating and intractable illnesses,” FDA Commissioner Scott Gottlieb said. “We’re at a turning point when it comes to this novel form of therapy.” Researchers are conducting more than 600 clinical trials in the U.S. that use gene therapy.

During a press briefing, Gottlieb heralded Luxturna as the FDA’s third gene therapy approval this year. In August, the agency cleared Novartis’ Kymriah, a CAR T-cell immunotherapy in which a patient’s immune cells are removed, injected with DNA outside the body, and returned to the bloodstream to fight leukemia. A second CAR T-cell therapy, Gilead Sciences’ Yescarta, was approved in October.

Luxturna, though, is the first treatment that fits the traditional notion of gene therapy, where DNA-filled viruses are injected directly into the body.

“2017 was a critical year for gene therapy,” says Guangping Gao, director of the Horae Gene Therapy Center at the University of Massachusetts Medical School. Approval of the first three gene therapies in the same year “is not a coincidence,” Gao says. “It is indicative of many years of progress and maturation in the field.”

Luxturna’s roots began with Jean Bennett’s research at the University of Pennsylvania in the 1990s. In 2000, she tested a gene therapy for genetic retinal disease in dogs. But further funding was difficult to come by in the wake of a highly publicized patient death in a different gene therapy clinical trial.

Bennett later collaborated with the Children’s Hospital of Philadelphia, which decided to commercialize the technology by providing $50 million to launch Spark Therapeutics in 2013.

Luxturna improves vision in people with a mutation in the gene RPE65, which encodes an enzyme crucial to vision. Light causes an eye pigment to change from a scrunched-up form called cis-retinal to an extended form called trans-retinal. This physical movement kick-starts the process of transmitting the signal of light into the brain.

To begin the cycle anew, the RPE65 enzyme reverts trans-retinal back into cis-retinal. People who have genetic mutations that prevent the production of RPE65 can’t reset the cycle. This results in visual impairment that usually begins in infancy or childhood and often leads to nearly complete blindness.

Although many mutations in RPE65 can lead to blindness, in theory Luxturna should be able to help them all. The therapy contains a complete copy of RPE65 DNA packaged in an adeno-associated virus, crucial for getting the DNA into retinal cells so the fully-functional enzyme can be made.

Luxturna is meant to be a one-time therapy, where a surgeon injects a solution containing about 150 billion DNA-filled viral particles directly beneath the retina of each eye. Tests in an obstacle course with different levels of light showed that the treatment improved patients’ vision.

FDA estimates there are 1,000–2,000 patients with RPE65 mutations that could benefit from Luxturna, but the drug’s expected high price tag may present a problem for getting the therapy to even that small number of patients. A price has yet to be disclosed, but in November, Spark CEO Jeff Marrazzo said “there is support for the value of the therapy in excess of $1 million per patient.”

In a press briefing, Gottlieb wouldn’t comment on the potential price of the drug, but he emphasized the agency’s commitment to streamlining how future gene therapies will be reviewed and evaluated. The agency will begin releasing disease-specific guidance documents for gene therapy in 2018.

As a bonus, Spark received a priority review voucher from the FDA, which can be used to speed up FDA review of a future new drug application. Intended to encourage development of therapies for rare pediatric diseases, the transferable vouchers have been sold for up to $250 million between drug companies.

Comments
Alan Weir (January 16, 2018 10:45 AM)
It is interesting to note in the comments about pricing Luxturna that Jeff Marrazzo uses “value of the therapy” as a criterion. I appreciate that with only 1000-2000 patients cost of development will not be realized by quantity of sales and also that all companies are in business to make a profit. However, previous reviews of the pharmaceutical industry quote profit margins of 30% and more for the top 25 companies. It seems to me that “what is the minimum needed to realize a moderate profit” would be much better than “how much can we get for each treatment”.
Reply »