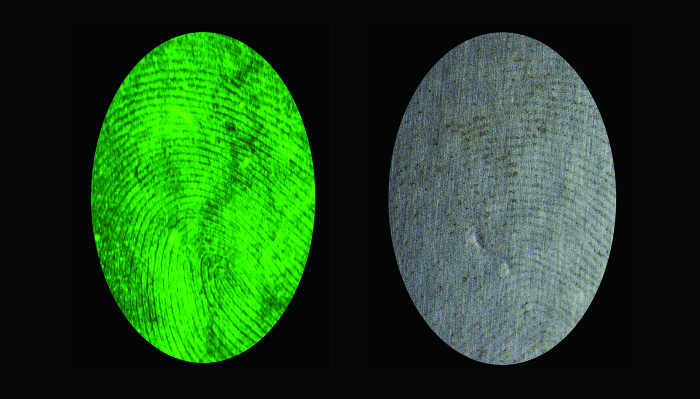 When collecting fingerprints at crime scenes, investigators choose from a handful of reagents to reveal the patterns deposited on surfaces by skin oils and proteins. They dust or spray surfaces with black carbon-based powder, organic dyes, or fluorescent molecules depending on what will maximize the prints’ visibility on a given surface, whether porous, nonporous, dark, or multicolored. To enhance the contrast of fingerprints against surfaces, researchers would like to stain them with molecules or metallic nanoparticles that glow when light is shined on them. But some surfaces—including metal and plastic—themselves fluoresce under ultraviolet light, which can obscure the details of a glowing print.

Quan Yuan, at Wuhan University, and her colleagues wanted to eliminate this background fluorescence. Surface fluorescence typically disappears once the UV light is turned off, so they sought a material with long-lasting luminescence that would continue to shine even after UV exposure was over.

The researchers synthesized Zn2GeO4 nanorods containing 1.0% gallium and 0.5% manganese that were similar to other persistently luminescent nanoparticles they’ve used for biomedical imaging. The researchers chemically modified the nanoparticle surface with activated esters that could covalently bond to amino acids in the ridges of fingerprints.

To test the particles as a fingerprint stain, the researchers tested a playing card and a soda can that someone had touched to leave fingerprints. They pipetted an aqueous solution of the nanoparticles onto each surface, removed the liquid after 30 minutes, and rinsed the surface with phosphate buffer. When the researchers shined UV light on each sample, the blue fluorescence of the playing card and the red fluorescence of the can outshone the glow from the nanoparticles. But once the light was turned off, only the green glow from the particles remained, revealing the whorls, branches, and other patterns in the fingerprints on each surface.

Anthony S. Stender, an analytical chemist at Ohio University, says these nanoparticles may be useful to detect prints on surfaces with visually complicated patterns or strong natural fluorescence. But he notes that it can be challenging to get new protocols adopted for widespread use in forensic labs in the U.S. Yuan says a forensic research institute in Beijing has visited her lab and is interested in testing the particles as an investigative tool.

Comments
Computer Kevin (December 12, 2017 8:22 PM)
Not bad tho - hope it help solve older crimes, but will they reprint old evidence with this technique? They should give it a try-- Maybe Boston could be the first to solve an old crime scene? Make History?
Reply »