Confronted with modern problems and opportunities, people are putting new spins on an ancient industry

Credit: Shutterstock | A man inspects a line of seaweed growing in Semporna, Malaysia.

Don’t let the weed in seaweed fool you: the plant’s usefulness as a crop dates back centuries. People in China, Japan, and South Korea have cultivated and harvested seaweed for food and other uses for hundreds of years. Seaweed derivatives have been used in textile ink for almost 1,000 years. During Ireland’s potato famine, people supplemented their diets with a type of seaweed known as red algae.

Today, seaweed is a multibillion-dollar industry. Given its natural origins and ease of cultivation, some people see the potential for uses in brand-new markets. Consumers, after all, are demanding ever more bioderived products.

Seaweed is a kind of algae. It’s known as macroalgae to distinguish it from microalgae, which include smaller organisms such as the cyanobacteria that can cause toxic blooms in ponds and oceans. Macroalgae can be classified as red, brown, or green, and they come in an array of shapes, including broad leaves redolent of terrestrial plants, wispy tentacles, and bulbous, fruit-like growths. Some species embed in the ocean floor, while others float freely.

On its own, seaweed is an important source of food for a large part of the world’s population. It contains nutrients such as sodium, calcium, iodine, zinc, and vitamin B-12. The seaweed industry churns out 12 million metric tons (t) per year, valued at more than $6 billion, according to a 2018 report by the Food and Agriculture Organization of the United Nations. Eighty-five percent of that is for human consumption.

More than a third of the seaweed cultivated globally is an edible macroalgae from the genus Saccharina often called kombu. China is the largest producer of edible seaweed. What the Japanese call nori, often used to roll sushi, is a genus of red algae known as Pyropia. About half the seaweed grown in South Korea comes from brown algae of the genus Undaria and is called wakame.

Seaweed cultivation provides a source of income in at least 35 countries. The macroalgae is extremely productive—it’s ready for harvest after just 6 weeks—and requires only simple technology to farm. Workers can grow seaweed on underwater lines staked near the ocean shore and dry it on mats, sand, or grass.

Wild seaweed that grows in polluted waters carries a risk of contamination by heavy metals such as arsenic and mercury. As a result, only a few countries—primarily Chile, China, and Norway—harvest the wild version.

Related: How (and why) scientists are mining manure for phosphorus

The seaweed derivatives carrageenan, agar, and alginates are a $1 billion-plus business. 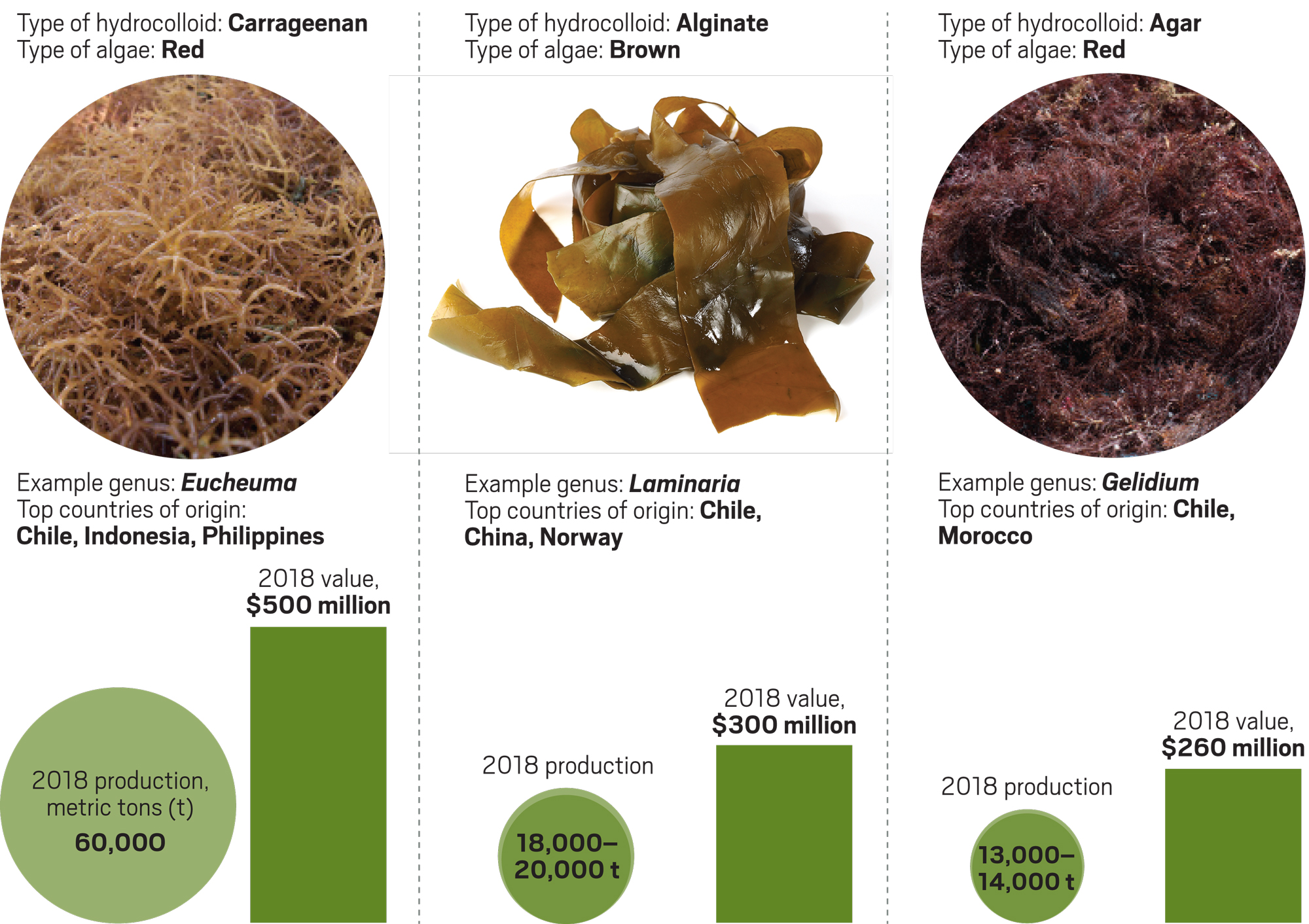 Of the three, carrageenan is the most popular, with an annual global output of about 60,000 t. Indonesia and the Philippines are the largest producers.

Hydrocolloids also have uses outside the food industry. For example, carrageenan is used in drug delivery, agar is found in cosmetics and growth media, and alginates are used in wound dressings. About 100,000 t of seaweed-derived hydrocolloids are produced each year at a value of more than $1 billion, according to Dennis Seisun, president of IMR International, a San Diego–based firm that conducts market research on hydrocolloids.

Seisun promotes a concept he calls the employment factor to capture the number of people who derive income in the creation of $1 worth of a given product. With seaweed-derived hydrocolloids, Seisun says, “there’s an employment factor that is hundreds of times more valuable than some of these other products that are mechanized and automated”—products like synthetic cellulose derivatives.

Given how easy seaweed is to grow—and the fact that some areas are periodically inundated with too much—people are exploring a number of new uses. One is as a feedstock for biogas—the gases that microbes emit as they digest seaweed in the absence of oxygen. If a species of macroalgae with the right proportions of lipids and carbohydrates can be grown sustainably, the resulting biogas could serve as an alternative to fossil fuels and land-based biofuels.

Whatever the end use, sustainability is a crucial consideration for the seaweed industry. Noting that the industry has grown exponentially over the past 50 years, a 2016 United Nations policy brief cites the importance of sustainable farming practices to safeguarding the industry. In making room for their seaweed farms, for example, workers sometimes remove native plants such as eelgrass and mangroves that help maintain water quality.

Other challenges include detecting disease and invasive pests in seaweed and maintaining genetic diversity in wild stocks. Without genetic diversity, seaweed banks are left vulnerable to blight.

Some areas of the world have more seaweed than they can currently handle, while others have big ideas and want to grow more. Read on to learn how researchers are responding to an influx of Sargassum in the Caribbean and exploring seaweed-derived biofuels and chemicals in the Netherlands.

Share X
To send an e-mail to multiple recipients, separate e-mail addresses with a comma, semicolon, or both.
Title: Seaweed farming for food and fuels
Author: Alexandra A. Taylor
Chemical & Engineering News will not share your email address with any other person or company.