by Raleigh McElvery, special to C&EN

All too often, plastics serve a “one-and-done” purpose. Roughly 300 million t of materials are discarded each year after just one use, contributing to waste and pollution. Scientists and businesses have been teaming up to change this, devising ways to transform single-use plastics into products of even greater value. Now, researchers have devised a catalyst capable of selectively converting single-use polyethylene—even from a plastic bag—into lubricants like motor oil or waxes for use in detergents, cosmetics, and more (ACS Cent. Sci. 2019, DOI: 10.1021/acscentsci.9b00722).

Companies have been testing techniques like catalytic pyrolysis, which uses high temperatures and lack of oxygen to convert waste polymers into a range of short-chain hydrocarbons like the ones in diesel fuel. In this study, the researchers leveraged hydrogenolysis instead, which uses hydrogen to cleave carbon-carbon bonds. Neither approach is perfect, but with the proper catalyst, the latter has the potential to be more selective and yield higher quality products, says study coauthor Massimiliano Delferro of Argonne National Laboratory.

Until now, few studies had probed the catalytic hydrogenolysis of polyethylene, a plastic in single-use items like films for food packaging, milk bottles, and disposable components in medical devices. To make the new catalyst, which was originally synthesized in the lab of coauthor Kenneth R. Poeppelmeier of Northwestern University, the team used atomic layer deposition to disperse platinum nanoparticles onto strontium titanate (SrTiO3) cubes less than 100 nm in size. Pt is a common catalyst for hydrogenolysis, and supporting the nanoparticles on SrTiO3 helps them withstand the harsh reaction conditions needed to perform the reaction on polyethylene.

One challenge of polyethylene hydrogenolysis is that it’s difficult to control the addition of hydrogen to the reaction, leading to excessive splitting of polyethylene into light, lower-value hydrocarbons like methane and ethane. In this work, the researchers controlled Pt nanoparticle size and distribution to minimize this problem, generating liquid hydrocarbons from a range of polyethylenes of different molecular weights. These hydrocarbons could serve as lubricants or waxes and be further processed into everyday necessities like cosmetics and detergents.

“We can get out a much more selective conversion to a specific range of molecular weights—something that you really can’t achieve with the technology that’s out there,” says study coauthor Aaron D. Sadow of Ames Laboratory and Iowa State University.

By studying how the polyethene interacted with the Pt/SrTiO3 catalyst, the team found that the size of the nanoparticles and the way they assembled on the surface of the support ensured that carbon-carbon bonds in longer polymer chains were cleaved preferentially over those in shorter chains, generating high-quality liquid products—even from a commercial-grade plastic bag. Their catalyst also outperformed a commercial hydrogenolysis catalyst, converting more of the starting polyethylene into the desired hydrocarbons.

“It’s all about chemical control of catalytic activity at the nanoscale,” says Matthew J. Rosseinsky of the University of Liverpool, who was not involved in the study. “For me as a fundamental researcher, that’s where the impact is really coming from.”

Although the catalyst is recyclable, it may still be too expensive to scale up and would need to withstand thousands of hours of use, says Marco J. Castaldi, director of the Earth Engineering Center at the City College of New York, who was not affiliated with the study. The catalyst has potential, he says, but requires additional testing with mixed plastics and contaminants like dirt, dyes, or food residue. Ideally, the hydrogen required for the reaction would come from a low-cost, sustainable source, and be easily recovered for use in subsequent reaction cycles.

Nina Bellucci Butler, CEO of the research and information technology firm More Recycling, says implementing chemical recycling globally will require new regulations to make the process more efficient and incentivize companies to cooperate. “We have to develop some policy that has the right drivers in it, and I think that we’re on the precipice of that right now,” she says. 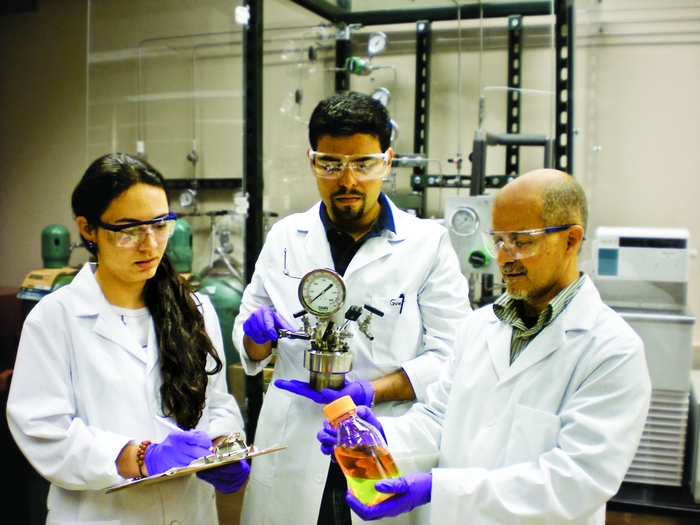 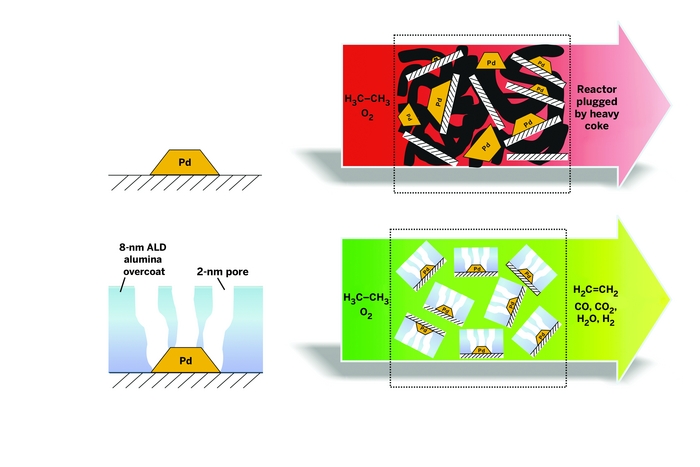 Materials
Triple-Protected Nanoparticles
Share X
To send an e-mail to multiple recipients, separate e-mail addresses with a comma, semicolon, or both.
Title: Single-use plastics transformed into high-quality liquid hydrocarbons with new catalyst
Author: Raleigh McElvery, special to C&EN
Chemical & Engineering News will not share your email address with any other person or company.

Comments
Dr. Paul C. Li (November 1, 2019 4:36 AM)
Dear Honorable Research Correspondent McElvery:
Cheng Feng Group used cerium stearate in compounding the low density polyethylene for film production in a range of concentrations from zero to five PHR, (per hundred rubber hydrocarbons).
The lab made films were subject to weather aging exposed to natural environments days and nights.
I did have witnessed the satisfying results at Cheng Feng’s Suzhou plant with Mr. 王雷，who conducted and carried out the details of all experiments. The resultant degraded LDPE looked like shredded paper depending on the concentrations of the surfactants mixed in the compounds and of course, the length of weathering.
Really, the LDPE could be composted in this way to go back to soil form.
You can contact the email via fei@pigment.com.tw who is responsible for external communications for Cheng Feng Group stationed in Tainan, Taiwan, CN.
Best Regards, and submitted to your kind attention on the basis of better chemistry for better life and life itself is chemistry.